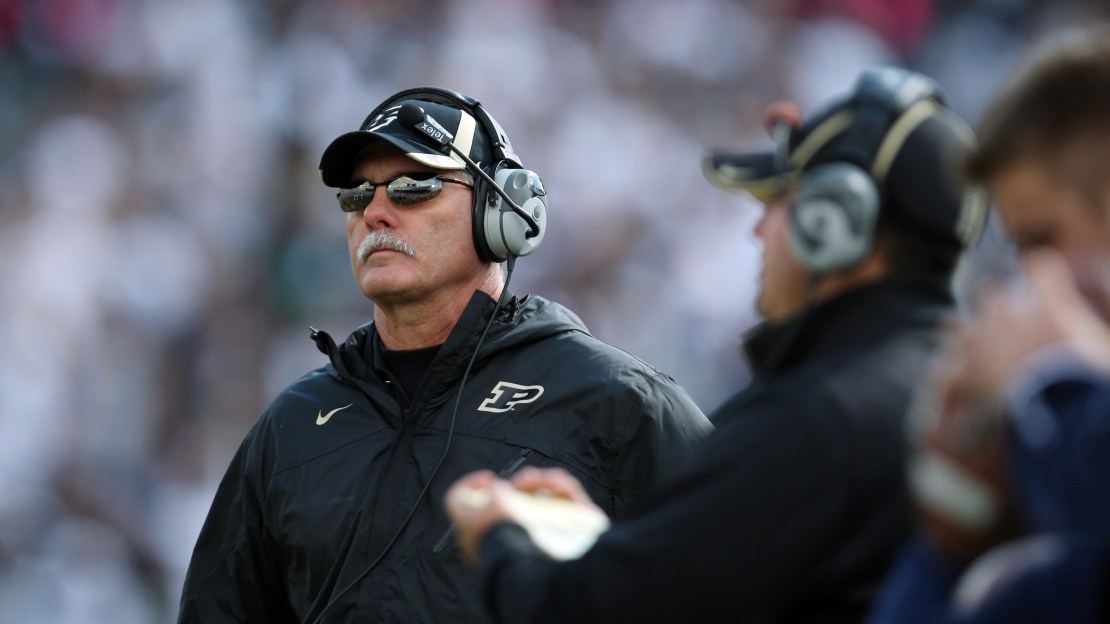 All the Big Ten football news that?s fit to link to is below. You are welcome.

BLACK AND GOLD: It has been said time and again: This looks to be Danny Hope?s best Purdue team, as he enters his fourth season in West Lafayette.

There are myriad things to like, including a revamped defensive coaching staff, momentum from the program?s first bowl trip since 2007 and 15 starters back. But I?m most interested to see how Hope and his staff handle the quarterback situation, which I think will tell the tale of the 2012 season.

Many coaches think if you have two quarterbacks, you don?t have any quarterbacks. What does having three in the mix mean? Time will tell. For now, Caleb TerBush is the starter with Robert Marve back for a sixth season. And Rob Henry, the 2010 starter, also is back after missing last season with a knee injury.

Add it all up, and Purdue could be a dark horse in the Leaders Division. But beware the start to the Big Ten season, which will see the Boilermakers open at home vs. Michigan and Wisconsin before traveling to Ohio State. No Big Ten school has a tougher start to the conference slate.

Can Purdue win one of those games? If so, a nice season could be in the offing.

KEEP IT ROLLING: Kyle Meinke of AnnArbor.com poses the following query: Can the Michigan offense maintain its production?

In 2011, the Wolverines averaged 33.3 points en route to winning 11 games. This season, Michigan has most of its key offensive personnel back-save for stud center David Molk. But the Wolverines will be playing a more rigorous schedule.
In the end, I think Michigan?s offense will be just fine. It?s the defense-and that rehabbed line in particular-that will determine if the Wolverines can match last season?s glory.

SOME KIND OF DEFENSE: Michigan State has won 11 games each of the last two seasons-and coordinator Pat Narduzzi?s defense has been at the crux of the Spartans? success.

The Michigan State defense ranked first in the Big Ten last season, which was capped by a three-overtime victory over Georgia in the Outback Bowl.

A secret to Narduzzi?s success? A visit to mighty Miami (Fla.) back when he was a G.A. at Miami (Ohio).

Now, Narduzzi is one of the hottest assistants in the nation who looks primed to be a head coach soon. Very soon. What other Big Ten assistants appear to be on the precipice of being a head coach along with Narduzzi? Glad you asked. My top three who are ready RIGHT NOW:

Knowing that, try to identify the players on your team?s roster that are relatively unknown commodities near the bottom of the roster who could emerge this fall.

Greg Pickel of the Harrisburg Patriot-News has IDed five defensive players for Penn State who you may not know but will in 2012.

My take: Love me, hate me, but don?t ignore me, right?