Olympic Journal: How I Made The Team 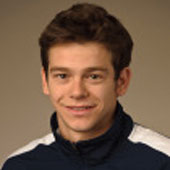 Felix Aronovich is a Penn State gymnast competing for Israel in the upcoming Summer Olympics. His journey to make the Olympic team is a long and winding one, and Aronovich explains in his first Big Ten Olympic journal for BTN.com. Read his first entry in this post and find more journals here.

"So, what have I done so far? Nineteen years of gymnastics, hundreds of national, international and collegiate competitions, tens of thousands of hours spent in gyms all across the world, all leading to one single event that will overshadow everything that came before for me and influence all that will follow. THE OLYMPIC GAMES. Every elite athlete, especially in individual sports, dreams of competing in the Olympics, and in three weeks I will join the small, elite group of people that are called Olympians.

"My journey began two and half years ago after I finished my mandatory service in the Israeli Defense Forces and left my family, friends and club team to join the Penn State gymnastics team. Each year my gymnastics improved due to our great coaching staff and intense workout regime, and I didn't know it then but that set me on the right path to London.

"One cold day in November while doing my homework I received an unexpected phone call from me coach back in Israel telling me there is an open spot for me in the Olympic trials in London. The trials are where a few teams but mainly individuals can punch their ticket to the Games. Off course I said. "Yes," and during winter break traveled back to Israel for 2 weeks of training and then to London.

"The meet went well and I passed the International criteria. But my place wasn?t secured yet, I still had to fulfill the Israeli criteria (top 12 all around in the European Championship).  And so after our NCAA season was over ( in which we placed third) I traveled back home to Israel again to train with my Israeli coach finish the preparing for Europeans. The meet was in France and it wasn't my best performance, but I was still able to satisfy the Israeli criteria by finishing eleventh, only one medium error from not making it. It was the longest 15 minutes of my life waiting for the results before knowing I made it. The gymnastics gods were in my favor.

"My Israeli team mate , Alex Shatilov, and I traveled back to Israel and started the end of our mutual preparations for the Olympics. Having ten practices a week and sleeping in the gym in between became my daily routine for the last two months. We only had one meet in that time, an international competition between us, Romania and France. A competition that went well and let us pinpoint weak spots and skills that deserve some special attention.

"The next three weeks will include a two-day get-together of the entire Israeli delegation, receiving the last of our gear and attending different lectures that vary from security issues to how to deal with the media. In between we will have some meetings with the press and shootings for different newspapers, but mainly practices. We call it ?gym time on gym time.? Doing routines and polishing skills until you are so tired that your body does your routine for you. Muscle memory in its purist form.

"Even though the Olympics are almost here, all I care and think about is tomorrow?s practice, and what to improve next time we do routines. The excitement only is starting to be noticed, even if very faintly
I am sure that next time I will be writing it will be different and new emotions will start popping up. Till then, time to chalk up and do another routine."

Editor's note: You can read more about Aronovich at GoPSUsports.com including his full bio. Also, find all of his journal entries during the Summer Olympics on his BTN.com archive page.