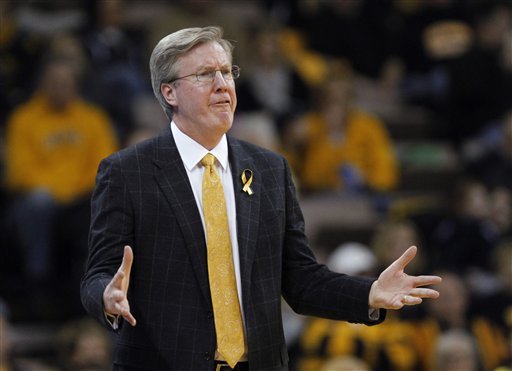 Iowa men's basketball coach Fran McCaffery has signed a seven-year contract, Iowa Director of Athletics Gary Barta announced Tuesday morning. McCaffery, who is 29-37 in two seasons at Iowa, will make a minimum average of $1.66 million annually over the length of the contract, beginning with a base salary of $1.3 million in 2012-13.

?Two years into his tenure, I?m thrilled with where Fran is taking our program,? Barta said in a release. ?He has done an outstanding job, in all phases."

This past season, McCaffery led the Hawkeyes to the NIT, the program's first postseason appearance since 2006. Iowa finished the campaign at 18-17.

?I am very excited to sign this contract,? McCaffery said. ?We have made tremendous progress in all phases of the program in two seasons. I appreciate the support and confidence expressed by President Sally Mason and Gary Barta in signing this contract.

This was really just a matter of time given how much the culture surrounding the program has changed since he arrived 2 years ago.

Essentially, McCaffery gets 3 extra years at about $500,000 more a season.