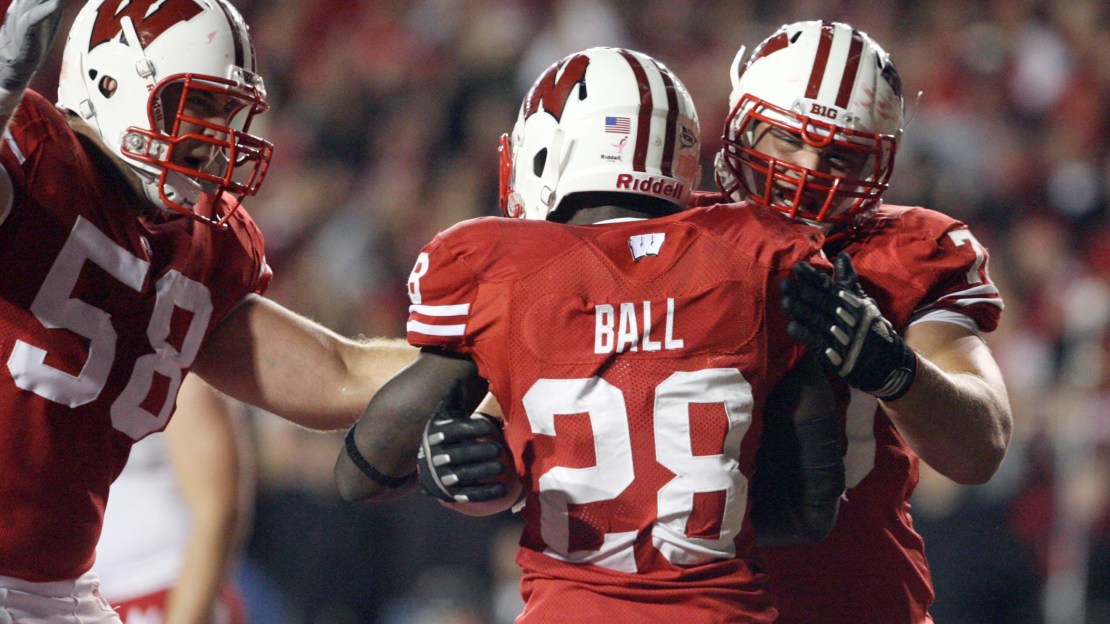 Wisconsin offensive coordinator Matt Canada realizes the situation he?s stepping into in Madison. He?s taking over an attack that ranked No. 1 in the Big Ten in total offense (469.9 ypg), No. 1 in rushing (235.6 ypg) and No. 1 in scoring (44.1 ppg) last season under former coordinator Paul Chryst, who left to become head coach at Pitt following consecutive Rose Bowl trips in the 2010-11 seasons.

Canada-one of six new Badger assistants for the two-time defending Big Ten champs–expects the vaunted Badger offense to continue to dominate after arriving from Northern Illinois, where he served under ex-Badger defensive coordinator Dave Doeren and saw his attack rank in the top 12 in the nation in total offense, rushing offense and scoring offense last season.

Canada has a good centerpiece in running back Montee Ball, a Heisman finalist last season who ran for 1,923 yards and tied an NCAA single-season record with 39 touchdowns. The line always is strong, while there are plenty of options at quarterback and receiver to sort through.

And Canada brings a familiarity with the Big Ten to Madison, having served as offensive coordinator at Indiana from 2007-10 sandwiched between stints running the attack at Northern Illinois. While Canada has run a spread scheme at Indiana and Northern Illinois, look for him to operate a multiple attack that will play to Wisconsin?s strengths and tradition of being physical in the ground game.

I caught up with Canada to get his impressions of this offense as the Badgers gear up toward training camp.

Q: What did you think when Bret Bielema first contacted you about becoming offensive coordinator?
A: I had recruited the state of Wisconsin when I was at Northern Illinois, so I was familiar with what Coach (Barry) Alvarez had done and the whole package. It always seemed like a neat place. And when I coached at Indiana, I always thought they had a neat atmosphere at Wisconsin. I always had a desire to coach there. It was one of those destination places. You don?t get to do that often. So, I was fortunate Bret called. We knew each other from competition. And (running backs coach) Thomas Hammock (the lone holdover on the offensive staff) is a guy I recruited and coached, which has been helpful to me.

Q: How will the offense be different than it was under Paul Chryst?
A: I think it?s gonna be the same. Wisconsin has an offensive identity, but there always are differences (between coordinators). Paul and I have known each other a long time, but we are different. That?s just the nature of our profession. We all do things a bit different. How we are different, I don?t know. But I don?t think you are going to see a huge difference.

Q: How will we know this is your offense? Will there be any tweaks that will be noticeably different?
A: I think you?ll see those as time goes on. But I?m not a big believer in ?it?s my offense.? We have a great staff. We have Thomas (Hammock, assistant head coach/running backs coach), who I think a lot of. (Tight ends coach) Eddie Faulkner played at Wisconsin who I worked with last year at Northern Illinois. Over the last six months, I have gotten to know (offensive line coach) Mike Markuson and (receivers coach) Zach Azzanni.

As a play caller, you are going to see some differences and nuances. But somebody who knows me, who knows how I have done things in the past, I guess would be able to sit there and tell you ?yes, that?s what he does.? But I don?t know who that is. Hopefully, what our offense will be is our best players making plays. Everywhere I have been, and the players I have coached, I have run a multiple offense. It?s the same offense with the same terminology from Northern Illinois and Indiana and now at Wisconsin. We have had very good players at every position. So, we will try to play to the strength of our players.

Q: Is it fair to say Maryland transfer Danny O?Brien will be the starting quarterback?
A: It?s not. Coming in, I wanted to earn the respect of the kids that I coach. I think that?s important. Those are my guys. Everyone else has to come in and earn their stripes. I said that to Danny right from the start. Danny knows that. But he?s gonna come in and compete for the job. We have had a real challenging situation from an injury standpoint at quarterback over the past few years. Some of those guys are getting healthy. We are gonna let the best guy win the job. Obviously, Danny brings some on-the-field experience which is unique to him as compared to the other guys. But the other guys were here through the spring and know the system, the players and Wisconsin. Competition is a great thing. I think quarterback will be a position of strength.

Q: Are we going to see Montee Ball and James White on the field together this year?
A: I hope that wherever I have coached, we have tried to maximize our talents. We did that in the spring a couple days, and those were the days the media was there. We have great backs. I always say our job is to put our players in position to make plays, and get our best players on the field. So, whenever we can do to do that, we will. We want to score as much as we can and win football games.

Q: Do you like your receivers?
A: I have enjoyed getting to know Jared (Abbrederis). He was a little nicked up in the spring. But he was able to lead from the sideline and let some other guys step up. He certainly will be the leader of that position. Coach Azzanni has done a good job bringing those guys along. But there are some open spots and opportunities for guys to step up and make plays.

Q: Is tight end strong?
A: We like the versatility of the tight ends. Jacob (Pedersen) is a good one. We always are looking to get those guys in mismatches. The tight end spot has become a strong one here at Wisconsin. I think we have the makings of a strong offense.