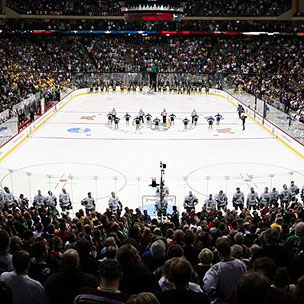 It's been talked about and reported on for months but now it's official: Two Big Ten men's hockey teams will play a game at Chicago's Soldier Field next winter as part of the inaugural Hockey City Classic. The doubleheader will feature Notre Dame vs. Miami (Ohio) and Minnesota vs. Wisconsin.

There will be Wednesday news conference in Chicago where more details should be released, including the date and time of the game. It figures to be somewhere on or around the weekend of Feb. 16, 2013. Most college hockey fans know that outdoor hockey is nothing new for the Big Ten.

In 2001 Michigan played Michigan State at Spartan Stadium. Wisconsin played Ohio State in 2006 at Green Bay's Lambeau Field. Later, Wisconsin played Michigan a game at Camp Randall Stadium in February 2010 while Michigan and Michigan State faced off in the Big House in December 2010. Last season, Michigan played Ohio State at Progressive Field, home of baseball's Cleveland Indians. On top of that, the NHL's Winter Classic will be held at Michigan's football stadium this year, too.