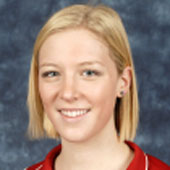 As a dual citizen of France and the United States, Indiana swimmer Margaux Farrell is competing for France in the upcoming Summer Olympics in London. Farrell is one of a handful of Big Ten names chronicling their Olympic adventures for BTN.com, and she will send back reports throughout these Summer Games.

Here is the latest from Farrell:

"One month to go, that?s all! After almost 17 years of competitive swimming,  I can?t believe I am four weeks away from swimming at the Olympic Games. I?m not going to lie – it has not really hit me that this is happening to me. This past week I came home from Indiana University and it was the first time I?d been home since Christmas.  So, this week was filled with practice, errands, more practice, more errands, and then of course some much needed time with my puppy.

"My journey to London has been set in motion since I qualified in March, but it will really begin to pick up speed on Tuesday when I finally depart for France. Once in France, I will compete at the Paris Open, which is a small competition that the national team does to thank the sponsors of French swimming. At this meet we will be able to try on all of our Olympic gear and make sure that everything fits correctly before the orders are finalized and packaged for our arrival at training camp two weeks later.

"The Paris Open will take place this upcoming Friday and Saturday, and then on Sunday I return to the French Riviera, which is where my club team is based. I will then get the pleasure of spending a little over a week in bright and sunny Antibes, where I will continue training before reuniting with the entire national team for our last official training camp on July 17. The training camp will be in Dunkerque, which is where the French Olympic trials were held this past March, and I?m excited to go back to a pool that now holds so many positive memories for me.

"I hope that training there will give me some last minute inspiration to carry over into the Games. We will be in Dunkerque until July 24, which is the day we depart for London. I don?t want to get too ahead of myself just yet, so for now I have some last minute things to get in order. A quick dentist appointment, getting my nails done, buying some snacks to take on the plane, and maybe some new outfits to debut when I?m in Europe. You know, all of the important stuff of course!

"I?m looking forward to sitting down and writing my next post because that will mean that I?m not only in Europe, but I?m that much closer to swimming my race in London. Next stop: Paris Open!"

Editor's note: Farrell set a new school record in the 100-meter freestyle with a time of 55.69 in prelims at the 2011 World University Games in China this past August. Find Farrell's full bio page at IUHoosiers.com