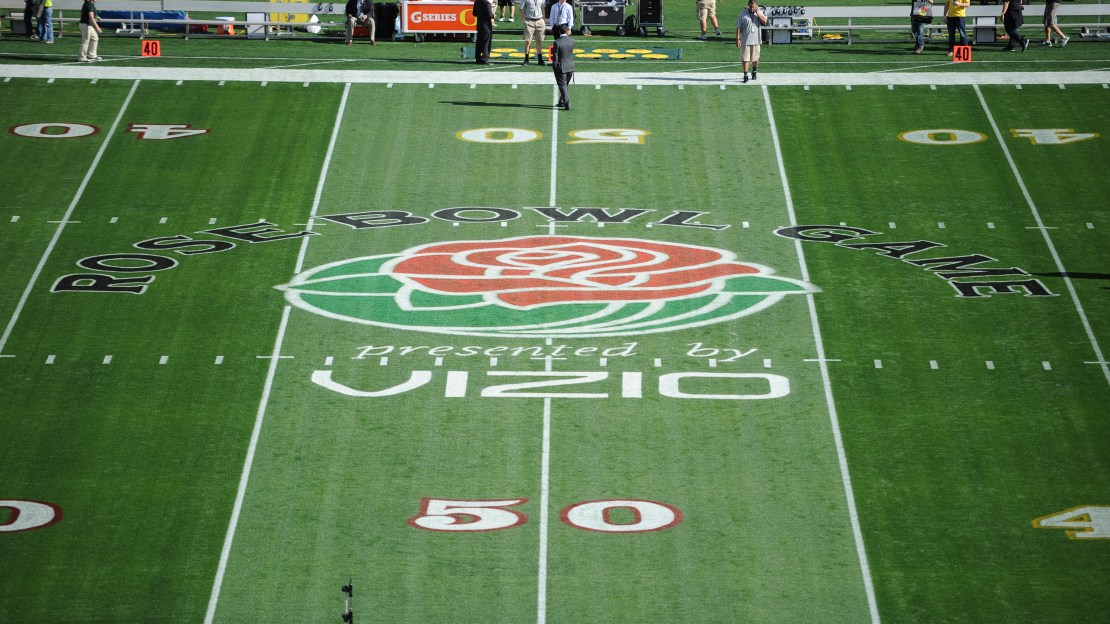 (AP) Playoffs and tournaments long have determined champions of every college sport from baseball to bowling. The exception was major college football. That ended Tuesday. Come 2014, the BCS is dead.

A committee of university presidents approved a plan for a four-team playoff put forward by commissioners of the top football conferences.

For years, the decision-makers had balked at any type of playoff because they said it would diminish the importance of the regular season. If only two teams had a chance to win a championship in the postseason, even one loss could be too many. That made for some very high stakes regular-season games. As recently as 2008, Southeastern Conference Commissioner Mike Slive proposed the type of plan adopted Tuesday, and it was quickly shot down.

Four years later, minds changed. The 12 university presidents stood shoulder to shoulder on a stage at a news conference in a posh hotel in the nation's capital and delivered the news.

"It's a great day for college football," BCS Executive Director Bill Hancock said. "As soon as the commissioners realized they could do this and protect the regular season, the light went on for everybody."

The move completes a six-month process for the commissioners, who have been working on a new way to determine a major college football champion after years of griping from fans. The latest configuration is certain to make even more money for the schools than the old system – and not satisfy everyone.

"There were differences of views," said Virginia Tech President Charles Steger, who headed the BCS presidential oversight committee. "I think it would be a serious mistake to assume it was a rubber stamp."

Nebraska Chancellor Harvey Perlman was the most notable holdout. He had said he preferred the status quo or a tweak of the Bowl Championship Series. Perlman said the playoff still wouldn't be his first choice, but he was not going to stand in the way of progress.

"This is the package that was put forth and we will strongly support it," he said.

Instead of simply matching the nation's No. 1 and No. 2 teams in a title game after the regular season, the way the BCS has done since 1998, the new format will create a pair of national semifinals.

Many college football fans have been clamoring for a playoff for years, and the BCS has been a constant target for criticism. Lawmakers have railed against it. A political action committee was formed, dedicated to its destruction. The Justice Department looked into whether it broke antitrust laws. Even President Obama said he wanted a playoff.

Now it's a reality.

No. 1 will play No. 4, and No. 2 will play No. 3 on Dec. 31 and/or Jan. 1. The sites of those games will rotate among the four current BCS bowls – Rose, Orange, Fiesta and Sugar – and two more to be determined. One of the new sites will likely be wherever the newly formed bowl created by the SEC and Big 12 is played, Slive said.

The Cotton Bowl, played at the $1.1 billion Cowboys Stadium in Arlington, Texas, has long wanted to be part of the BCS and is expected to make a strong push to be in the semifinal rotation.

The winners of the semis will advance to the championship on the first Monday in January that is six or more days after the last semifinal. The first "Championship Monday," as it was called in the BCS release, is set for Jan. 12, 2015.

The site of the title game will move around the way the Super Bowl does, with cities bidding for the right to host.

The teams will be selected by a committee, similar to the way the NCAA basketball tournament field is set. The men's tournament has 68 teams, and 37 at-large bids.

The football committee will have a much tougher task, trying to whittle the field down to four. This season, 125 schools will play at the highest level of college football.

Among the factors the committee will consider are won-loss record, strength of schedule, head-to-head results and whether a team is a conference champion. The selection committee will also play a part in creating matchups for the games at the four sites that do not hold a semifinal in a given year.

"I think it's tremendous progress," Washington State coach Mike Leach, a playoff proponent, said in a telephone interview. "Five years ago there wasn't even dialogue about a playoff. Instead of diving in the water, they dipped their toes in. I think it's' going to be ridiculously exciting and it's going to generate a bunch of money. I wish they dived in."

The BCS had given automatic qualifying status to six conferences, the SEC, Big Ten, Big 12, Atlantic Coast Conference, Pac-12 and Big East. That allowed those leagues better access to the big, high-payout games than the other five conferences, such as the Mountain West and Conference USA.

Automatically qualified status is gone and the commissioners believe the new system will create more interesting games beyond the ones that determine the national title.

"What the system now is, several semifinals, championship game and some access bowls. By creating a couple of access bowls, people will be able to play high-quality opponents in big venues with big brands," Big Ten Commissioner Jim Delany said.

No one has put a hard number on it yet, but this new format figures to more than double the TV revenue of the current BCS and Rose Bowl contracts. Those pay out about $155 million annually.

The commissioners want to lock in this format for 12 years with a television partner. The current four-year BCS deal with ESPN runs through the 2013 season. The new format will be presented to potential TV partners in the fall, starting with ESPN.

"I think we have found what we think is the right place and it stabilizes the postseason for a length of time that I think is healthy for the game," said Slive, whose members have won the last six BCS championships.

There are still some details to work out – such as who will be on the committee and what new bowls will be involved in the semifinal rotation – but all the decision-makers are on board.

Lower divisions of college football already have a playoff, but the highest level has always used bowls and polls to determine its champion. Those days are coming to an end.

"We believe this new format will be good for student-athletes, for the alumni and for our institutions," Steger said. "It's a best of both worlds result. It captures the excitement of the playoff while protecting the regular season."

Happy major CFB will finally have a playoff. Won't please everyone but nothing's perfect. Still will have best reg. Season in sports.

Selection committee will look at W-L first and foremost. If Boise State or any other team goes undefeated, 99.9% chance they're in playoff.