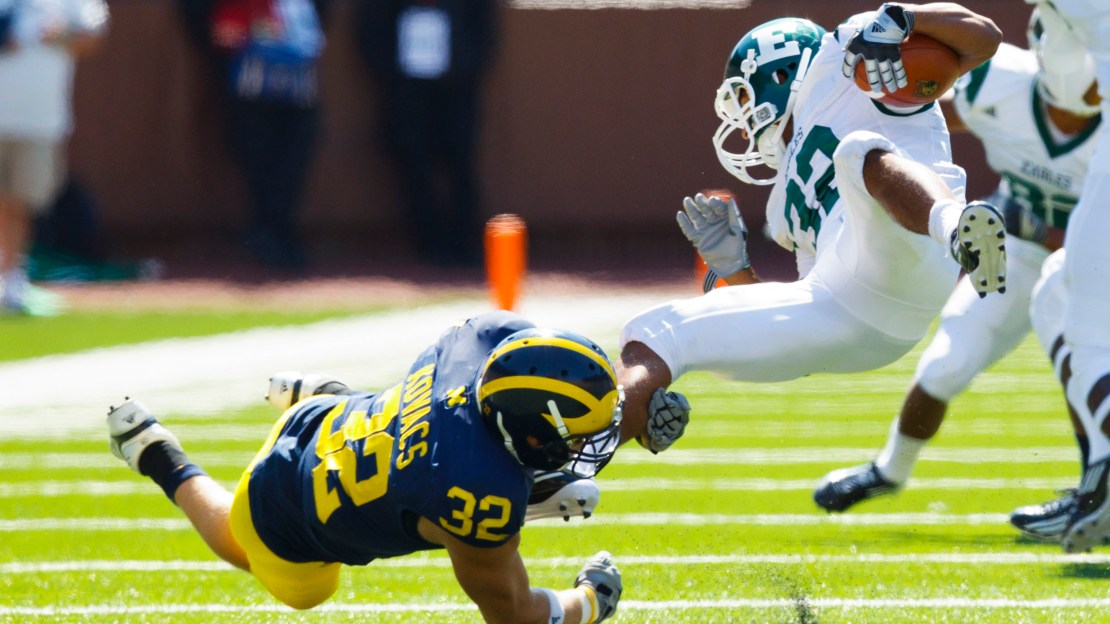 No assistant coaching hire may have had as much impact as the arrival of Greg Mattison to Michigan as defensive coordinator prior to last season. Brady Hoke plucked Mattison from the Baltimore Ravens, where he served as defensive coordinator. And the results were swift and immediate during an 11-2 season that was capped by a Sugar Bowl triumph over Virginia Tech.

This all was a far cry from the defensive numbers posted prior to the arrival of Hoke and Mattison, who was a Wolverine assistant from 1992-96. And it was a major reason why Michigan was one of the nation?s most surprising teams in 2011.

Now that the bar has been set high, Mattison has no plans of regressing. I talked to him recently to get his thoughts on how he sees his 2012 defense coming together.

Q: The line lost some key personnel, including Mike Martin. How does the front look?
A: We lost some guys who stepped up and played the way we expected them to play. The next group has to step up. It began this spring. They worked hard at making sure they bridged that gap. If you measure how they are working this summer, you have to be pleased. They all are here the entire summer and working hard, so we are excited about the group coming back.

Q: Who is gonna be a leader up front?
A: Will (Campbell) has to be. And we always predicate our defense on being strong down the middle. That?s always the way to measure the kind of defense you are going to have. If you don?t have someone right in the middle of that defensive line and ?backers and safeties, then you are gonna have a problem. Will has done everything we ask him to do to try to prepare to be the best. He?s one of the hardest working guys we have had this summer. We are excited about what he?s doing.

Q: Any surprise players no one is talking about who you think could have a big impact?
A: Brennen Beyer is a young man who may get a lot of attention. He was a backup as a freshman last year at outside linebacker and we have moved him to end. He has worked very hard on his strength. He feels more natural there because that?s more what he did in high school. He won?t have to worry about dropping into coverage. He?s a young man you could see some big things from. (Linebacker) Joe Bolden is another. He came in at mid-term as a freshman. He has an opportunity to help the defense very quickly.

Q: Will the linebackers be among the stronger units on the defense?
A: It?s a group that probably has logged the most playing time. I think it?s also the group that needs to improve the most. With the way our line played last year, we weren?t as pleased as we would have liked to have been with the play of our linebackers. That?s a group with the added experience they have, you expect them to step up and do what they are supposed to do.

Q: What do the linebackers need to get better at?
A: The last game in the Sugar Bowl was a perfect example. We had too many missed tackles. And we have to become better blitzers. We are going to be a pressure team. But it doesn?t do any good if you are sending people and they can?t beat anyone one-on-one on the rush. So, blitzing technique and improved tackling are the goals.

Q: Are you pleased with where the secondary is?
A: Jordan (Kovacs) has been a strong leader for us this summer. He?s kind of an example of what you look for in a Michigan football player. He comes every day to improve, he plays as hard as he can and he?s a guy who makes plays. So we look for big things out of him. Blake Countess got a lot of playing time for a freshman last year. But you always worry about what kind of year his second year will be. A lot of times, that sophomore year is when you don?t do as well as you should. But he has shown every sign that that won?t be a problem. He?s as hungry as he was last year when he first went in there. J.T. Floyd has to have a great year for us being a senior.

Q: How has the defense changed from this year to last year?
A: The biggest difference is these guys understand the expectations, No. 1. They understand out defensive expectations and the expectations that go with playing defense at Michigan. They also understand the scheme, it?s not all new. A year ago, everything you talked to them about whether it was defenses, technique, expectations, all of those were new. Now, they know exactly when we put something in why we are running it, what?s the purpose of it and what you have to do to be successful with it and what you can?t let happen to be successful with it.

Q: Will you do anything different schematically this season?
A: One thing you can do is check in and out of defenses based on tendencies and formations, which we really didn?t do last year because everything was new and you had an inexperienced defense.