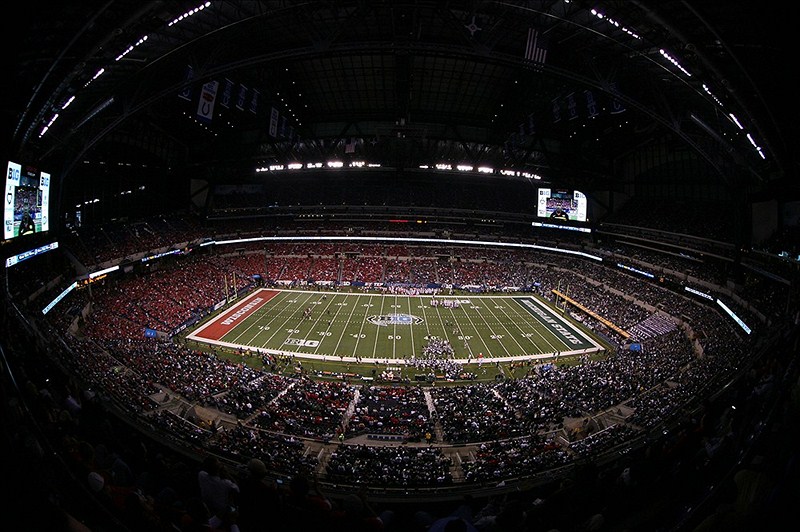 Make a note of this day. It?s memorable. It?s historic. It?s the day college football changed forever with the adoption of a four-team playoff. Today in Washington, the BCS presidential oversight committee rubberstamped a four-team playoff that was endorsed by conference commissioners and Notre Dame. The four-team configuration will be in place for 12 years beginning with 2014.

Every sport in America concluded its season with a playoff-even FCS, Division II and Division III football. But not major college football. Those days are finished. Thank goodness.

Delany also mentioned he liked the more rational and transparent way of selecting teams for the postseason-as opposed to the often confounding BCS formula.

?We are really excited about it,? Delany said at a press conference concluding today?s events in Washington.

In earlier negotiations, the Big Ten stated it was happy with the status quo-keeping the current BCS system in place. Its second choice was a plus-one model, in which the top two teams would be selected after the bowls to meet in a national title game.

The Big Ten got neither, as the four-team playoff model has been endorsed by all parties. And it?s a four-team model that won?t require schools to win their league title to be considered for selection.

Instead, a selection committee will chose the four teams, using a variety of data to make its choices. What?s the data? Stay tuned. But conceivably, a conference could have two of the four playoff teams. That likely would have been the case last season for the SEC, as LSU and Alabama were widely considered among the four best teams according to almost every poll and formula.

The arrival of the playoff will end an oft-criticized BCS system that has been in place since 1998. That has to make most of America ecstatic. Conferences and universities have to be ecstatic with the specter of the playoff being worth perhaps as much as $5 billion from a TV revenue standpoint.

There was a time when the possibility of a playoff seemed remote, as many felt university presidents would never approve a playoff for fear it would interfere with the academic calendar, sanctity of the regular season and damage the tradition of the bowls.

But, again, the BCS system of selecting the No. 1 and No. 2 teams to meet in a title game based on an oft-criticized formula along with the specter of a massive financial windfall seemingly pushed all parties to this point. Before the ink has even dried on the new deal, some speculated how quickly the four-team playoff would morph in an eight-team playoff.

?Sometimes less is more,? said Delany. ?I?m sure this will play well for 12 years.?

Here is how the playoffs will be structured. Teams will be chosen by a selection committee. The teams would be seeded, with No. 1 playing No. 4, and No. 2 playing No. 3. The national semifinal games would be played on New Year?s Eve or New Year?s Day, with the sites rotating among the four current BCS bowls-Rose, Fiesta, Sugar, Orange-along with two others to be determined.

The commissioners also need to figure out how to distribute the money. They have agreed in principle on how revenue will be divided, according to Delany, but that has not been made public yet.

There is time to hash out these details. But today should be about celebrating the arrival of playoff. It?s a day many people felt never would come.