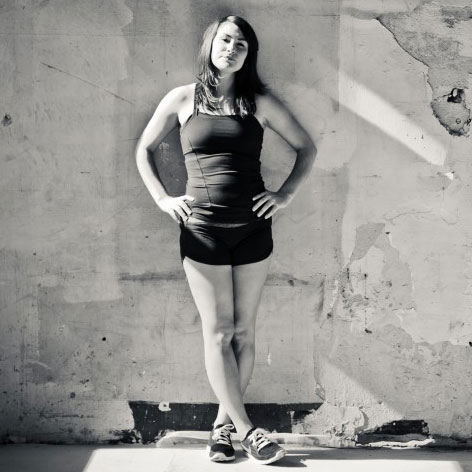 When we traded emails with Jenn Gibbons on Friday afternoon, the former Michigan State rower was just a little busy navigating the Lake Michigan waters off the shore of southern Wisconsin. With an eye on cranking across almost 30 miles day in her specially designed boat named Liv, the Chicago resident is rowing around the entire perimeter of Lake Michigan to raise awareness about the to fight to beat breast cancer. As of today, she is almost halfway to her goal of raising $150,000 on this trip.

Gibbons, a political science major, attended Michigan State for three-quarters of her degree and it is there where she picked up rowing and rowed for the Spartans for two years. She later moved to Chicago and graduated from DePaul.  "I still bleed green ;)," Gibbons wrote to BTN from her boat. She set off from Chicago on June 15 and intends to complete the 1,500-mile trip solo with a support team on land while she makes stops along the way. She consumes roughly 5,000 calories a day to fuel the trip. Here's a link to a page that shows her route and lists her upcoming stops in case you feel like running down to the shore and rooting her on.

In case you're wondering, she figures to take about 9,600 rowing strokes each  in a boat that weighs over 700 pounds. And she'll be doing that for two months while sleeping on the boat each night.

"Sleeping is very easy – even in a rocking boat," Gibbons wrote to us. "After 10 to 11 hours of exercise a day, I could sleep anywhere.  But really, you get used to the rocking. It's actually quite comforting."

Out on the water alone she's been listening to lots of music, mostly mix tapes made by friends back home. And what's been the biggest surprise so far? Navigation.

"Finding landmarks on the GPS for places you've never been before is such an adventure," she wrote. "It's amazing. Being aware of everything and constantly on 'guard' to be safe doesn't always allow me to enjoy the beauty of the lake but I'm doing my best!"

And she's sending back updates all he time. In fact, her website www.row4row.org is loaded with lots of great stuff about the trip, including a blog that she updates during her few breaks from rowing. Here's an excerpt from her entry on July 19 describing a somewhat harrowing moment:

"I write this post with mixed feelings and thoughts in my heart in mind. This adventure requires risk and learning along the way. It also requires me to be safe, smart and for my pride to take a back seat when it?s appropriate. It?s really hard to gauge how accurate my judgment is when I?m excited and scared at the same time. I don?t know how else to explain it?but it?s like I go between telling myself to calm down and be smart?and then the next moment I?m calling myself a wuss for having a single doubt in my mind." Read the rest of it here.

The website also has plenty of additional information, including some great shots of her boat. You can also donate to her cause or sponsor a mile as well as track her trip. You can also follow her on Facebook, where she adds some really fun photos.  Her Twitter account is @row4row . Here's one recent tweet:

Coming into harbor with 30 mph winds. That was wild. I never want to have to do that again.

Gibbons is a founder of and coach with Recovery on Water, and they've also posted a number of videos to the site's YouTube page, many of them dealing with Gibbon's training for this event. In the video below from a year ago, you get a good sense of how the boat operates.

And her trip, of course, is drawing plenty of attention and you can see the press coverage over here. Among Chicago media outlets, Fox TV station in Chicago covered her departure (watch the video) and then checked in with her by phone earlier this week (watch the video). She's talking with reporters along the way, too.