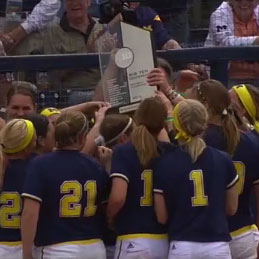 Forty years ago a Saturday Title IX was signed into law stating that "no person in the United States shall, on the basis of sex, be excluded from participation in, be denied benefits of, or be subjected to discrimination under any education program or activity." Here at BTN we have a few interesting numbers when it comes to women's sporting events.

Over five years we've produced 1,465 women's sporting events. This past academic year, BTN increased the number of productions by 20 percent from the previous year with 549 women's events compared to 548 men's events across all platforms.

That prompted us to look back at a few special features produced here this past year, including this inside look at the life of Michigan State's women's basketball coach Suzy Merchant. Here's another good one on Purdue's Courtney Moses among our growing collection of Big Ten women's basketball videos.

Last fall BTN.com also rolled out this past season "a feature called "Gimme Five" where former Northwestern basketball player and current journalist Patrica Babcock-McGraw conducted interviews with a variety of Big Ten women's basketball players. Listen to them all here.

And over at Big Ten.org there's an informative article detailing the impact of Title IV and the role it has played in the Big Ten Conference. For instance, did you know that more than 4,500 female student-athletes compete annually at Big Ten schools and that Big Ten women student-athletes have celebrated more than 50 NCAA team championships over the years?