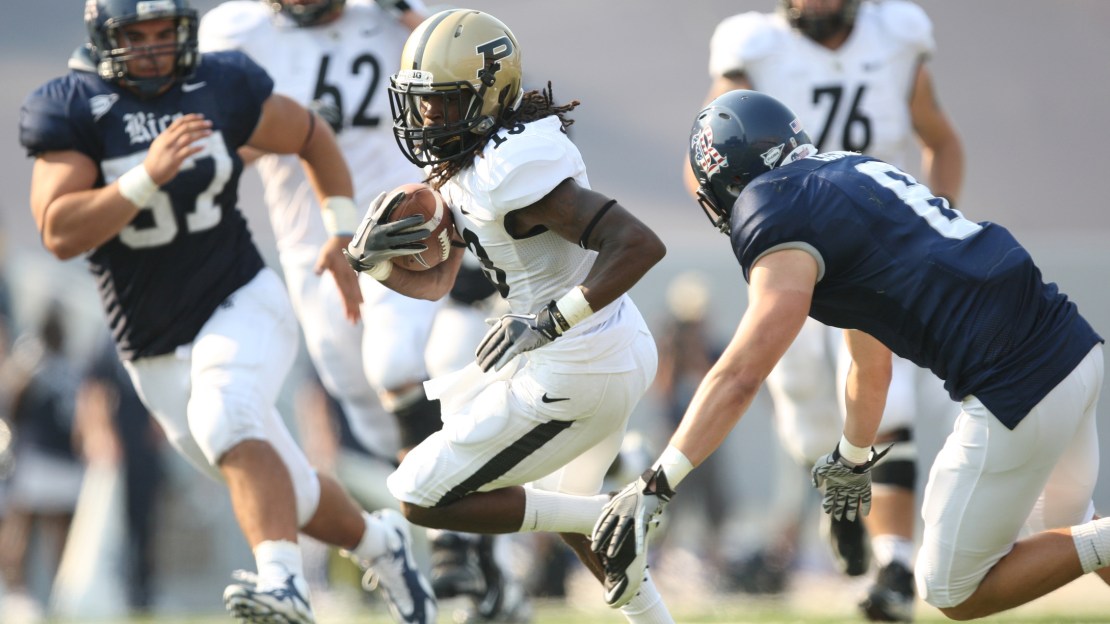 Purdue offensive coordinator Gary Nord has acquired an array of offensive knowledge over the years, working for many seasons under legendary Howard Schnellenberger.

Nord, 54, pushed the buttons on Schnellenberger?s offenses at Louisville and Oklahoma. And Nord was coordinator at UTEP, where he also was head coach from 2000-03. The last three seasons, Nord has been running the Boilermaker offense under Danny Hope, who took Purdue to its first bowl since 2007 last season with a Little Caesar?s Pizza Bowl win over Western Michigan to cap a 7-6 campaign.

Now, some feel the Boilermakers may be a dark horse in the Leaders Division. Why? Because of the offense.

Injuries have hampered the Purdue attack during the Hope era. Running back Ralph Bolden is coming off his third knee injury. Quarterback Robert Marve has struggled with knee injuries. Fellow quarterback Rob Henry injured a knee prior to last season. And on it has gone.

But the injury hex may have abated for an offense that?s loaded with veteran talent and due for some good news.

I caught up with Nord to get him impressions of his fourth Boilermaker offense.

Q: Could this be your best offense yet?
A: We have all our skill kids coming back on offense-our top three quarterbacks, our top four receivers, our top three tight ends and top three running backs.

Q: Is the quarterback job open? Or does it belong to last year?s starter, Caleb TerBush?
A: TerBush is our starting quarterback right now. He won seven ball games last year, so we felt that at this point it was critical for us to get some continuity at that spot given the problems we have had keeping the same quarterback under center. We want to try to get some consistency there, so TerBush will be the starter.

Q: Will Robert Marve, who was granted a sixth year of eligibility, play a lot?
A: Yes, Robert will play. We have played two quarterbacks a lot of the times over the years. And when you have two good ones, I think you can give your team an advantage.

Q: What will you do with Rob Henry, the starting quarterback in 2010 who suffered a season-ending knee injury prior to last season?
A: He has to get healthy. He didn?t go through the spring. He?s still coming off an ACL injury, so we will have to baby him into it to see when he can go. But if he was healthy, he was our starting quarterback when he got hurt. When he gets healthy, he?ll be in there competing at quarterback.

Q: How is running back Ralph Bolden looking?
A: He?s like Henry, he didn?t go through the spring. He tore his ACL (late last season), same one, second time. He?s still questionable on if he?ll be able to make it back or not.

Q: Are you happy with Akeem Shavers (519 yards rushing in 2011) and Akeem Hunt (287) at running back?
A: Both can be productive. They have a year of experience under their belt. They got better each game they played last year and have the ability to score on any given play.

Q: Are you happy with the receiving corps?
A: Antavian Edison was second on the team in receptions last year (44) and is back. He?ll be a four-year starter for us. Gary Bush started for us last year and has improved tremendously. He has gotten a lot stronger. O.J. Ross is back. And so is Raheem Mostert, who led the nation in kickoff returns last year. We feel like we have great speed at the wideout spot.

Q: Any new players who could emerge?
A: It will be difficult for any young receivers to knock any of our top four wideouts out. But tight end Carlos Carvajal was a mid-term freshman kid who has a lot of potential and has a chance to see some action in the fall.

Q: How does the line look?
A: It has been banged up for the last year or so. We had some kids who had some surgeries that kept them out of the spring. We have to get the starting five in there and get some continuity. But we have five guys who have proven they can play at this level and win on any given Saturday. If we can get all five of them healthy, then we will be in good shape.
From left, we have Justin Kitchens at tackle, Peters Drey at guard, Rick Schmeig is the center, right guard is Kevin Pamphile and right tackle is Trevor Foy. We like them.