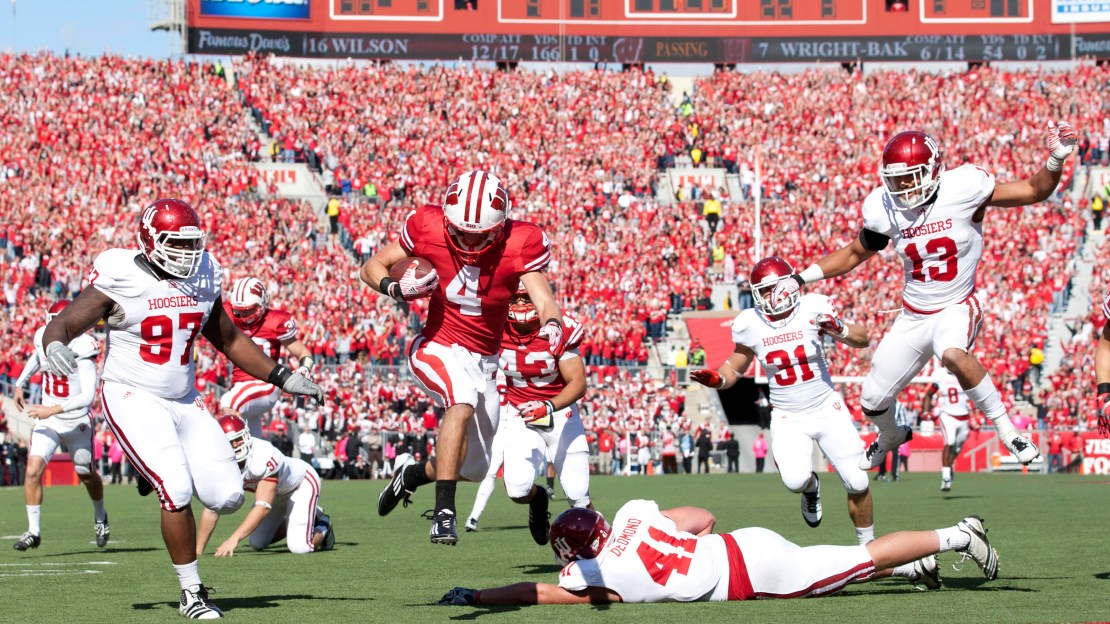 Yesterday, BTN.com senior writer Tom Dienhart and BTN.com web editor Brent Yarina hit email to debate the 2012 Big Ten receiving yards leader, the sixth in our series of Big Ten statistical predictions. Next up: Receiving touchdowns. Who will lead the Big Ten in 2012? See Tom and Brent's email thread in this post and vote for your leader.

Brent: One look at the Big Ten's returning receiving TD leaders, and it's easy to see the conference must replace a lot of playmakers. Among the four returning leaders, in fact, two are tight ends (Pederson, 8; Stoneburner, 7) and one is a running back (Ball, 6). That being the case, it's difficult to pick anyone but Abbrederis, the lone receiver of the group. He'll be a marked man, much more so than last season, and he'll have his second starting quarterback in as many years, however he's a player who has a knack for making big plays.

@BTNBrentYarina — Raheem Mostert ( @RMos_8Ball ) because you can't stop him, you can only hope to contain him!

Tom: The losses at receiver and tight end in the Big Ten are well documented, as you addressed, making any prediction on any receiving category a dicey proposition. I am going to go with someone from Iowa. Why? Because I think James Vandenberg is the best passing quarterback in the Big Ten. And I think the Hawkeyes may have to travel by air often while a group of unproven running backs and an overhauled line develop. Plus, new coordinator Greg Davis has a knack for the passing game. So, having said all of that, I will go with tight end C.J. Fiedorowicz as the Big Ten leader in receiving touchdowns. I think he will be a real weapon-especially in the red zone–this year and maybe the top tight end in the Big Ten.

Brent: I like it! When you said you were going with someone from Iowa, I figured it would be Kennan Davis. Fiedorowicz is going to be a stud, and I like him as my dark horse candidate, actually. As we've discussed plenty in this series, Iowa is going to throw a lot, meaning the pass-catchers are going to compile big numbers. Fiedorowicz is right up there with Davis, in my mind.

Tom: As far as dark horses go, keep an eye on Michigan State?s DeAnthony Arnett, a transfer from Tennessee who could make a big splash catching passes from new Spartan quarterback Andrew Maxwell. I think Maxwell has a chance to be excellent right out of the gate-and he?ll have room to throw with defenses focused on running back Le?Veon Bell.