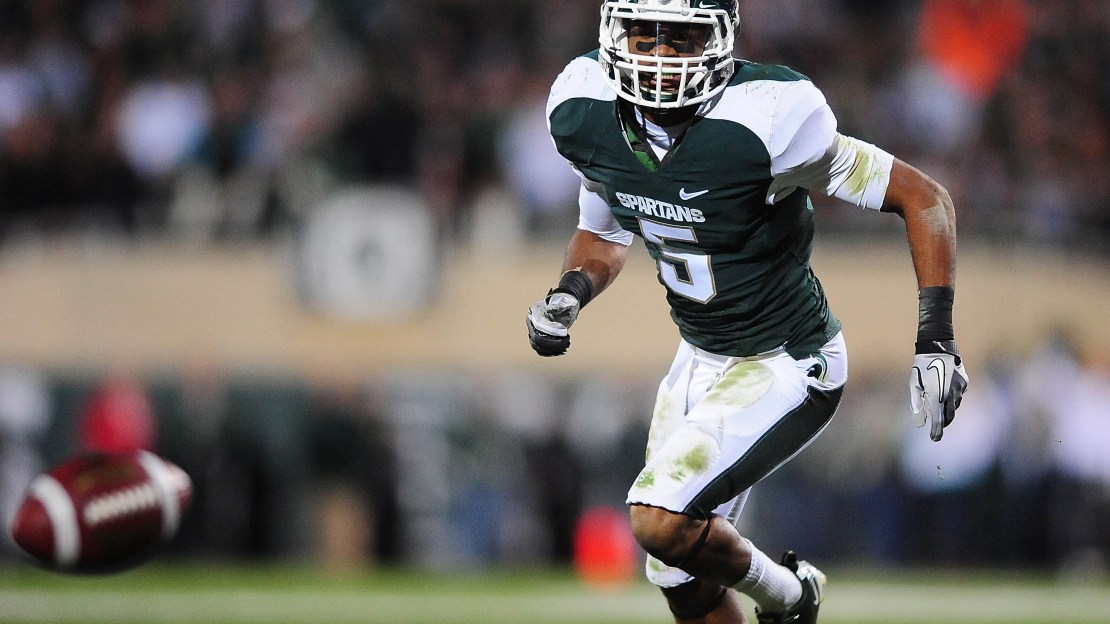 Big Ten defensive backfields are loaded with talent, including cornerbacks like Michigan State?s Johnny Adams, Iowa?s Micah Hyde and Purdue?s Ricardo Allen, along with safeties like Ohio State?s C.J. Barnett, Michigan State?s Isaiah Lewis and Michigan?s Jordan Kovacs. And some of the units figure to rank among the best in the nation, including those at Ohio State, Michigan State and Nebraska.

Here?s how I rank the 2012 Big Ten secondaries. And don't forget about all of my 2012 unit rankings.

1. Ohio State – All four starters are back for what should be one of the best secondaries in the nation. Cornerback Bradley Roby was a freshman sensation in 2011. His next stop: stardom. Travis Howard forms the other half of this strong corner tandem. Christian Bryant (strong) and C.J. Barnett (free) are a stout duo at safety. Barnett is one of best safeties in the Big Ten. In fact, he may be the top safety, flashing instincts, tackling ability and coverage skills.

2. Michigan State – Losing star safety Trenton Robinson hurts, but this still shapes up as a strong secondary. Johnny Adams rates as one of the top corners in the Big Ten-and the nation. He?s a legit Thorpe Award candidate and likely first-round draft choice. Darqueze Dennard is the ying to Adams yan, a corner with size and coverage skills who often is tested with Adams on the other side. Strong safety Isaiah Lewis came into his own as a premier talent with All-Big Ten ability last season. Kurtis Drummond is penciled in at Robinson?s strong safety slot. Coaches like his potential.

3. Nebraska – The Cornhuskers are strong at safety even with the loss of Austin Cassidy. Strong safety Daimion Stafford should be one of the stars of the secondary and maybe the best player on the defense. He?s a big hitter who covers a lot of ground. Free safety P.J. Smith is a veteran who knows the defense and rarely is out of position. There is talent at cornerback but little experience. Standout Alfonzo Dennard is gone, which hurts. Mohammed Seisay arrived from a junior college in the spring and looks like a potential star as the No. 1 corner. Andrew Green and Ciante Evans-among others–also figure in at corner. Former running back Braylon Heard could an asset as a nickel or dime back.

4. Michigan – This unit is coming off a strong season-and it could be even better in 2012. Cornerback Blake Countess enjoyed a big debut last season and looks like a future star. He?ll pair with J.T. Floyd to form a nice corner tandem. Floyd is bigger and thicker than Countess but still can cover with aplomb. Courtney Avery also will be a factor at a corner spot that will be a strength. Savvy veteran safety Jordan Kovacs is a former walk-on who has blossomed into a leader. He is an underrated athlete who runs well and likes to hit. At free safety, Thomas Gordon has range, speed and a nose for the ball. He?s able to cover from sideline to sideline. This unit may have to tighten coverage to compensate for pass rush that has something to prove.

5. Illinois – There?s plenty of speed and athletic ability for a group that benefitted from a strong line in 2011. Just one starter is gone, but it?s a good one: cornerback Tavon Wilson, who was a second-round NFL selection. Terry Hawthorne is a big-play corner who will be the unquestioned star of the unit. He also figures to double as a receiver because of his uber athletic ability. Staffers have confidence in Justin Green taking Wilson?s spot. Green arrived on campus as a running back but has developed into a good corner. Free safety Supo Sanni is built like a linebacker. He loves to hit but often struggles in coverage. Steve Hull is an aggressive strong safety with speed. He could be a star this fall.

6. Iowa – This is a deep unit that needs to get better in coverage and make more big plays. Cornerback Micah Hyde is the cornerstone of a secondary that has potential but needs to produce more big plays. Hyde is one of the Big Ten?s best, a unique blend of size and speed with shutdown ability. He will be one of the top corners in the Big Ten. B.J. Lowery is the other corner, and he has star potential-and the ability to play safety. He?s a sure, physical tackler with coverage skills that have improved. Staffers are excited about new starting strong safety Nico Law. Tanner Miller is a free safety with range and a nose for the ball. He?s also an emerging leader.

7. Penn State – This is going from a strength to an unknown with all four starters gone. Coaches are counting on Steph Morris to be a key player at corner. He?s undersized, but Morris is a good athlete who has shut-down ability. The other corner will be Adrian Amos or Derrick Thomas. Each has good size and speed, which will help with a more aggressive scheme in a secondary that will feature more man coverage. Malcolm Willis is penciled in at free safety, while Jake Fagnano is slated to start at strong safety but will be pushed by Stephen Obeng-Agyapong. Willis must be a leader along with Morris.

8. Purdue – This is a group with underrated potential. Ricardo Allen is the star. He plays bigger than his 5-9 size, displaying pop in the run game. Allen also is a top cover man and a student of the game. Running mate Josh Johnson has ideal size and decent speed; he could be good. Count on Frankie Williams playing a big role at corner, too. He?s a youngster who the coaches think has a big future. The safety tandem of Max Charlot—a former JC transfer–and Taylor Richards is solid in coverage and good in run support but needs to make more big plays.

9. Wisconsin – There are two big holes to fill with cornerback Antonio Fenelus and free safety Aaron Henry gone. They were the Badgers? top defensive backs in 2011. But there are building blocks for this perpetually underrated defense. Shelton Johnson will be a bellwether at strong safety, while Marcus Cromartie is back at corner with something to prove. Devin Smith is ready to assume Fenelus? corner spot. He redshirted last season after suffering a foot injury. Dezmen Southward is a big, rangy free safety who covers a lot of ground and has a nose for the ball. He and Johnson will be one of the most athletic safety duos Wisconsin has had in years.

10. Indiana – Without a doubt, this unit would be helped by an improved pass rush. But it needs to improve, too. Coming off a sensational freshman season, safety Mark Murphy holds it together in the secondary. He directs traffic, hits and covers a lot of ground with his underrated athletic ability. Alexander Webb lacks size but is tough, smart and can cover at the other safety slot. Cornerback Greg Heban is a former walk-on who has blossomed into a strong contributor. He can hit but needs to tighten his coverage. Heban will pair with Lawrence Barnett, who lacks top-end speed but can tackle and has a nose for the ball.

11. Northwestern – Lots of exciting, young athletes. The issue: experience. No doubt, these guys would benefit from a better pass rush. Safety Ibraheim Campbell is the star of the secondary-and of the defense-who led the Wildcats in tackles last season. He?s a heady playmaker who rarely is out of position. He?ll need a sidekick with Brian Peters gone. Davion Fleming and Jimmy Hall will be factors. Staffers think redshirt freshman Nick VanHoose can be a lock-down cornerback. He can run and hit. Daniel Jones and Demetrius Dugar are in the mix at cornerback, too.

12. Minnesota – Safety Kim Royston and corner Kyle Henderson are gone, but there are some building blocks. Brock Vereen and Derrick Wells will be factors at safety. Troy Stoudermire-a former receiver–is back at corner after his 2011 season was ruined by an arm injury after four games. The Gophers welcome three JC defensive back to augment a secondary that needs to make more plays. Corner Martez Shabazz may be the best of the bunch.