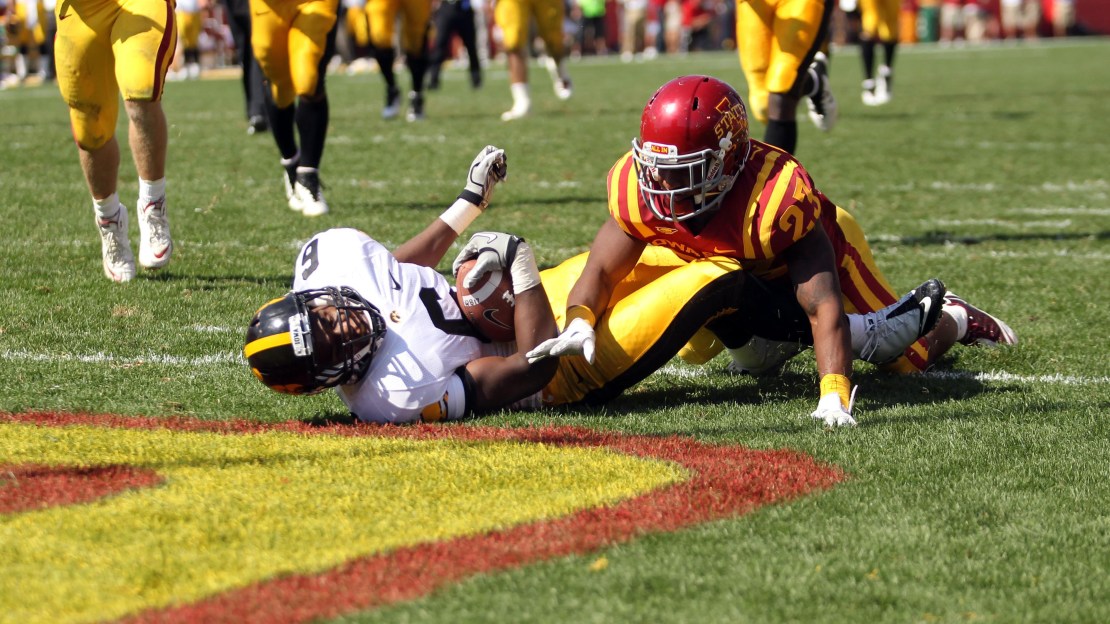 On Friday, BTN.com senior writer Tom Dienhart and BTN.com web editor Brent Yarina hit email to debate the 2012 Big Ten rushing TDs leader, the fifth in our series of Big Ten statistical predictions. Next up: Receiving yards. Who will lead the Big Ten in 2012? See Tom and Brent's email thread in this post.

Brent: As we all know, no position in the Big Ten experienced a bigger mass exodus than receiver, where only two of last season's top 10 pass-catchers return. The two guys: Wisconsin's Jared Abbrederis (933) and Iowa's Keenan Davis (713). We have to start there when considering the top 2012 Big Ten target, and I'm thinking Davis is the likely leader. Marvin McNutt he is not, Davis does catch balls from the same quarterback, James Vandenberg, that helped McNutt lead the way last season. He's also an underrated target, one that is ready and able to assume the No. 1 role. And everyone knows he'll receive more than his share of looks.

@BTNBrentYarina — Raheem Mostert ( @RMos_8Ball ) because you can't stop him, you can only hope to contain him!

Tom: This is a tough one, with all of those departures you mention. I am also going to go with Iowa?s Kennan Davis, who made 50 catches for 713 yards last season. I know he?s not the fastest or shiftiest receiver in the Big Ten. But he?s a proven and steady target who could be in line for a 70-catch season working with James Vandenberg, who I think is the best passing quarterback in the Big Ten. Plus, as we've discussed in earlier posts, this is a Hawkeye attack that may have to rely on the pass while a group of unproven runners emerges.

Brent: Got to say I'm surprised neither of us went Abbrederis. He is the leading returning receiver, after all, and is poised to see a huge uptick in targets.

I think we can both agree Abbrederis was last year's dark horse receiver, however. As for this year's candidate, I'm all over Michigan's Roy Roundtree. Who knows what happened to him last season, but this is a guy who erupted for 72 grabs, 935 yards and seven TDs as a sophomore. He has to bounce back, especially as a senior and now that he's wearing Desmond Howard's No. 21. To be honest, I also really like Kofi Hughes this year.

Tom: How about Michigan State?s DeAnthony Arnett? He was granted a waiver by the NCAA to play this fall after transferring from Tennessee. He could be the big-play wideout the Spartans need after seeing their receiving corps gutted. How quickly will he and new quarterback Andrew Maxwell develop some mojo?

Brent: I like it. The same can be said for Northwestern's Kyle Prater, a USC transfer.


BTN.com senior writer Tom Dienhart is on Twitter and Facebook, all of his work is at btn.com/tomdienhart, and you can subscribe to it all via his RSS feed. Also, send questions to his weekly mailbag using the form below.