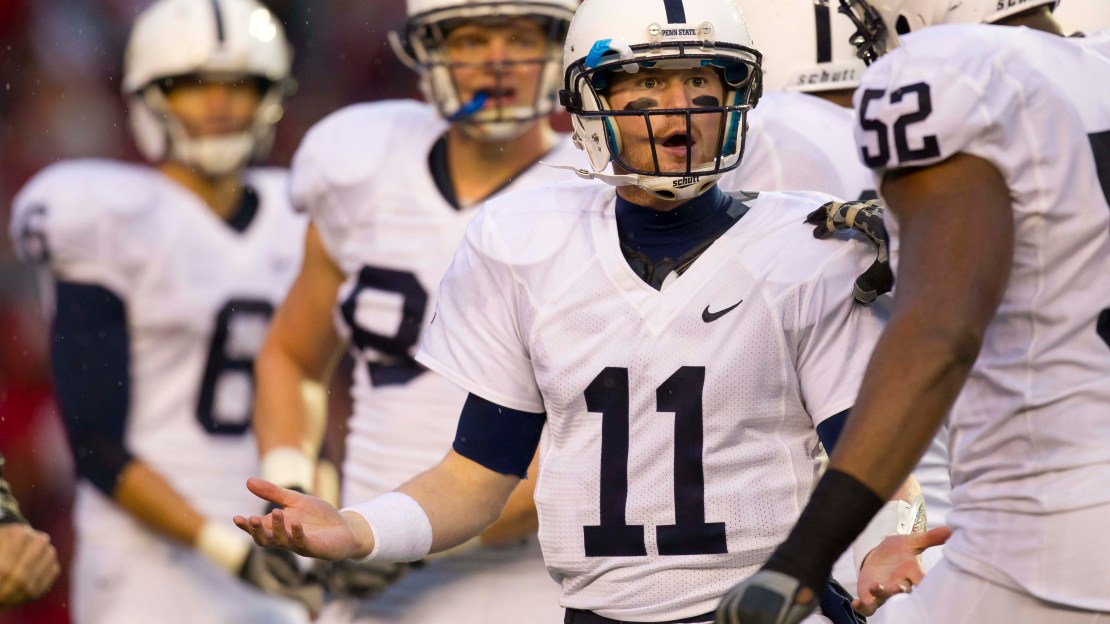 Take a quick spin around the Big Ten to get your Wednesday football fix. You won?t regret it. In fact, it?s 100 percent guaranteed.

McGLOIN IS NO. 1: Matt McGloin recently was named starting quarterback at Penn State over Rob Bolden. Now, McGloin is letting it be known how he felt about the quarterback rotation between him and Bolden last season.

McGloin: It was ?a killer.?

I agree with McGloin, who says a team has to believe in its quarterback and needs a clear-cut starter. As many coaches say: If you have two quarterbacks, you have no quarterbacks.

That is so true. Yet, we still see some schools continue to play two. Why?

PRICES ON WAY UP: Michigan A.D. Dave Brandon anticipates gradual increases in football ticket prices. After an 11-2 season and with a white-hot future for the program under Brady Hoke, you knew this was coming, right?

In case you are wondering-and I know you are-Michigan?s average ducat price is $65 and Ohio State?s is $75.

BRANDON MAKING MOVES: More from Michigan A.D. Dave Brandon, who is a busy man. He recently detailed how he is reshaping the athletic department in a radical way.

Get this: 85 employees have retired, resigned or been fired from the Michigan athletic department since Brandon assumed command two years ago and set out to modify what he called an "inward-focused organization" that was resistant to change.

The story reminds me of that classic scene from Office Space, You know what I?m talking about:

FAITH IN MAXWELL: Michigan State coach Mark Dantonio isn?t shy about embracing his feelings on new starting quarterback Andrew Maxwell, saying he will be a ?household name around here in the state.?

Maxwell isn?t the only thing to be excited about if you are a Michigan State fan. The defense welcomes back 19 of its top 22 players from a 2011 unit that ranked No. 1 in the Big Ten. And the offensive line is Dantonio?s best yet.

Are you thinking what I am thinking? You know: Michigan State may win the Big Ten and get to its first Rose Bowl since the 1987 season?

MORE FROM EAST LANSING: Michigan State is No. 5 in the country ? when it comes to scoreboard size. But, Spartan coach Mark Dantonio brags that it will be the largest in the state.

So, take that, Brady.

I don?t know about you, but I think we are beginning to witness a golden era in the Michigan-Michigan State and Michigan-Ohio State rivalries.

Please, enjoy and cherish these next five to 10 seasons.

BRING ON SERVICE ACADEMIES: How does Michigan vs. Navy strike your fancy? What about Michigan vs. Army? Sounds good, doesn?t it?

The Michigan brass has been trying to schedule the Academies. The Wolverines last played Navy in 1981 and Army in 1962. Michigan will play host to Air Force this fall, when it has a special tribute planned. Hopefully, more such tributes are in the future.

I love it when the Academies play iconic programs.

OUT TO CHANGE THINGS: I like Indiana coach Kevin Wilson. A lot. Especially his fire and intensity. When he says he?s determined to change the perception of Hoosier football, well ? I believe him.

History isn?t on Wilson?s side, but he doesn?t care. Since playing Virginia Tech in the Independence Bowl after the 1993 season, Indiana has been to one-ONE-bowl: After the 2007 season vs. Oklahoma State in the Insight Bowl.

But I know how good Hoosier football can be. I watched some of those great Bill Mallory teams in the late-1980s and early-1990s whip Ohio State and Michigan and produce six bowls from 1986-93.

And I also saw some great players ? Trent Green ? Van Waiters ? Ernie Jones ? Anthony Thompson ? Vaughn Dunbar. So, it can be done in Bloomington.

My take: The fact tight ends will be a big part of the Penn State offense shouldn?t be a shock, given Bill O?Brien made liberal use of them in his New England offenses. Keep an eye on massive Garry Gilliam. He could be in store for a big season.

My take: Who knew Dr. Tom had a sense of humor? I likey.