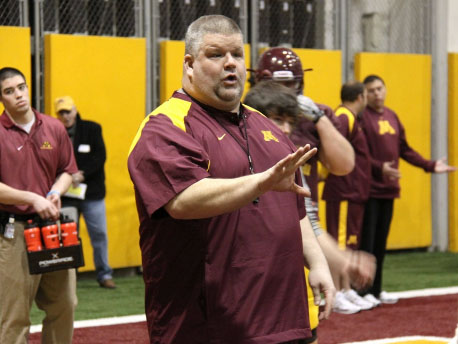 At each stop along the way with Kill, Limegrover?s attacks have played a big role in the success. So, he?s undaunted by the challenges that loom at Minnesota coming off a 2011 season that saw the Gopher attack finish last in the Big Ten in 2011 in total offense (310.3 ypg) and scoring offense (18.4 ppg). In fact, Minnesota failed to score 30 points in any game. The rushing attack was 10th (160.0 ypg), while the passing game was 11th (150.3 ypg).

Q: How much more of the offense will we see this year?
A: Probably a better way to think about it is we probably tried to put too much offense in last year. We had done some good things as a staff two seasons ago at Northern Illinois and liked the direction our offense was heading. I think the mistake we made last year was we tried to continue on in that same trajectory, almost like Year Four at Northern Illinois instead of Year One at Minnesota. I think that hurt us a little bit. I think we were doing some things that we hadn?t laid the foundation that we needed to. So, we scaled back about half way through the season–or a little later–and learned what our kids did and didn?t do well. With that in mind, we went a little different direction and we laid down a foundation.
We have done a better job in the spring and offseason of getting those fundamentals in place. Now, we feel better about that foundation and can start to build on it. We know a lot more about the kids in the program and what their strengths are, particularly at quarterback and what (MarQueis Gray) can do to be a difference maker.

Q: What has MarQueis Gray gotten better at?
A: He?s like any first-year starter with on-the-job-training. People can say whatever they want, but he had played wide receiver. That?s a tough transition to go from being a receiver and part-time Wildcat quarterback to being an every-snap quarterback who is in charge. Over the course of last season, he kept learning. He?s great after the ball is snapped doing things. That?s where we come in, getting him into his comfort zone.

We don?t do a lot of stuff with him that he?s not comfortable with, a lot of pre-snap stuff, motions and movements. Let?s keep it static and make sure that once that ball is snapped, he and everyone feel good about where they will be and need to go. We pulled back on movement and motion to increase his comfort level.

Q: Who will catch his passes?
A: That?s a good question. We have a young group. Brandon Green is our lone veteran coming back. He is Mr. Consistency. He?ll be where he needs to be. That?s a nice security blanket for MarQueis to have. The rest of them are pups, guys who need to develop and grow up in a hurry. Finding four or five receivers may be the biggest challenge we have. We had two true freshmen play for us last year, Marcus Jones who ended up blowing out a knee. He?s not big and physical but has a great knack for the ball. He?s good in the slot. He also ran back some kicks for scores. We can get him the ball on some jet sweeps and quick screens. We have potential for a big-play, down-the-field receiver in Devin Crawford-Tufts, who also was a true freshman. We are excited about those guys. We also have some true freshmen we think can come in and help, a guy like Andre McDonald. They all have to grow up in a hurry.

Q: What about the line?
A: We won?t have a senior in that group this year. Our leader will be left tackle Ed Olson, who will be a junior. It?s a lot of redshirt freshmen and redshirt sophomores. The future is bright. I sometimes wish we could fast forward to 2013 because we have a team of young kids. We are excited about this year but we still will go through some growing pains. But I really feel we?ll hit our stride in 2013 when these kids will have had a chance to play together. It?s just hard to get experience in a short period of time. As a group, I think we have a tremendous amount of talent up front, especially with the younger kids.

Q: Are you happy at running back?
A: Yes. The junior-college kid (James Gillum) we were able to bring in for the spring, he really did a nice job. We feel confident he?s a guy we can hand the ball to 22, 25 times a game. He?s durable. He?s tough. He has a knack for hitting the hole. He?s our kind of guy. There also are some young kids in the mix.

Donnell Kirkwood and David Cobb are kids we think could be every-down backs in the Big Ten and help us win some games, but they have to show that they can stay healthy. They both have been hit by the injury bug. A young man named Devon Wright may be the wild card. He?s not your typical I-tailback kinda of kid. He?s more of a taller (6-0), wiry kid but he has some speed and may allow us to do some things in certain situations to use his speed out of the backfield.
The pieces are there. We are excited about it. We have to be smart and proficient as coaches to make sure we get these young kids in the right situations and put them in roles that they can accomplish some things for us.