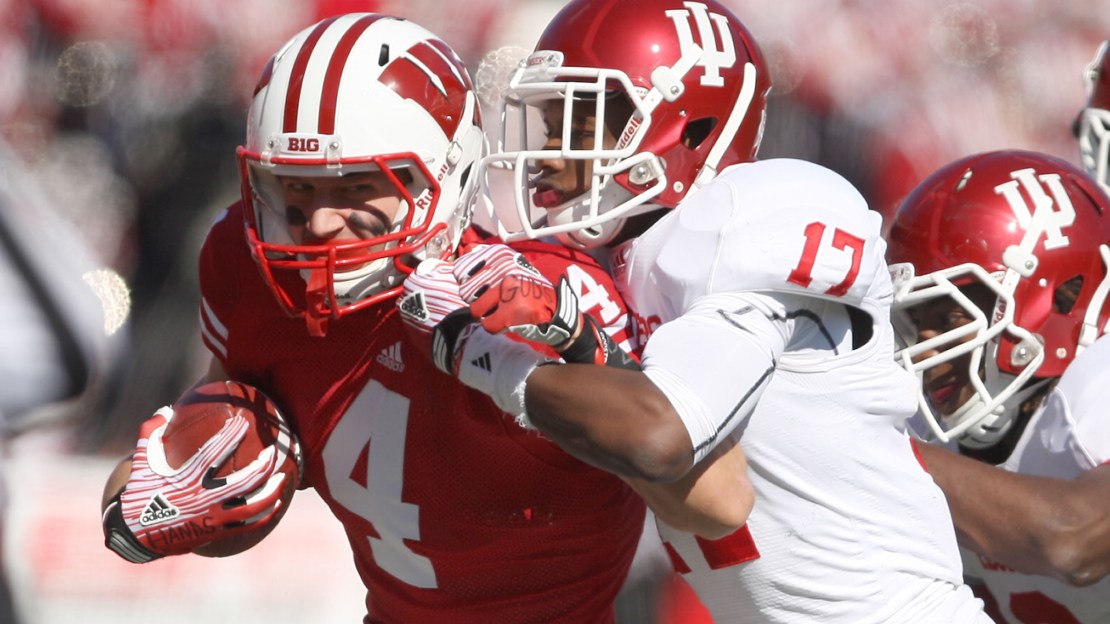 The corps could receive boosts from two transfers, as USC?s Kyle Prater is at Northwestern and Tennessee transfer DeAnthony Arnett is at Michigan State. The top veteran presences: Wisconsin?s Jared Abbrederis and Iowa?s Kennan Davis, but others will emerge.

Here?s my ranking of the Big Ten receiving corps.

1. Wisconsin – Yes, Nick Toon is gone after making 64 catches for 926 yards and 10 touchdowns, but there are several good options remaining. Former walk-on Jared Abbrederis paces all returning Big Ten receivers in receptions (55), yards (933) and touchdowns (right). Jeff Duckworth and Chase Hammond are good options who are big targets. Plus, tight end Jacob Pedersen is back after making 30 catches in 2011. He?ll be one of the Big Ten?s best.

2. Nebraska – Talent abounds on what may be one of the school?s best collections of wideouts in years with seven of last year?s top eight pass catchers back. (Brandon Kinnie is the lone loss.) Super-fast Kenny Bell is the leader who emerged as the top option in 2011 with 32 catches for 461 yards and three scores. Quincy Enunwa made 21 grabs for 293 yards and two touchdowns. Former quarterback Jamal Turner is another good option. Is there a better tight end tandem in the Big Ten than Ben Cotton and Kyler Reed? Nope.

3. Iowa – No doubt, the Hawkeyes will miss Marvin McNutt, who had 82 catches for 1,315 yards and 12 scores in 2011 and leaves campus with every significant receiving record. But talent remains, headed by Keenan Davis, who caught 50 passes for 713 yards and four touchdowns last season. Another viable option is Kevonte Martin-Manley (30 catches last year), and keep an eye on Don Shumpert and Steven Staggs. Big C.J. Fiedorowicz (16) may be the top tight end in the Big Ten.

4. Michigan – Even with Junior Hemingway gone after making a team-best 34 catches for 699 yards and four touchdowns, this corps looks solid. It?s vital for Roy Roundtree to regain his sophomore form, when he caught 72 passes for 935 yards and seven touchdowns. He inexplicably slipped to 32 receptions for 434 yards and three scores in 2011. Coordinator Al Borges is excited about Jeremy Gallon, the top returning wideout with 31 catches for 453 and three scores. And don?t sleep on Jerald Robinson and Drew Dileo. Tight end Brandon Moore has potential and needs to emerge with Kevin Koger gone.

5. Ohio State – This is Urban Meyer?s biggest worry with DeVier Posey gone after a season plagued by suspension. Are there are any game-changers in the house? It could be true freshman Michael Thomas, who was the star of the spring game with 12 catches for 131 yards. Devin Smith is back after leading the team with 14 catches for 294 yards and four touchdowns. Corey Brown also had 14 receptions but for 205 yards and a score. Who else will emerge? Chris Fields? Verlon Reed? Evan Spencer? Tyrone Williams? Jake Stoneburner could be a star tight end coming off a season that saw seven of his 14 catches go for touchdowns.

6. Penn State – This corps is peppered with questions with the loss of Derek Moye, who paced the team with a modest 40 catches in 2011. The one sure thing appears to be Justin Brown, a big target who made 35 receptions for 517 and two scores last year. Diminutive Devon Smith is a speedster who could be a game changer after making 25 receptions for 402 yards and two scores. Shawney Kersey could play a big role, along with Allen Robinson. Tight end Garry Gilliam has some Penn State watchers excited after missing two years with a knee issue. If he?s healthy, he could be a star in a tight end-friendly attack.

8. Michigan State – The losses are well-documented. B.J. Cunningham, gone. Keyshawn Martin, gone. Keith Nichol, gone. And tight end Brian Linthicum also has departed. That foursome combined for 202 catches for 2,799 yards and 19 touchdowns. What?s left is a bunch of potential, led by Tennessee transfer DeAnthony Arnett. Others expected to step up are Tony Lippett, a former cornerback, and Bennie Fowler. Massive Dion Sims could be a special tight end now that he?s healthy.

9. Northwestern – Here?s all you need to know: The leading returning receiver is the projected starting quarterback, Kain Colter. He made 43 receptions for 466 yards and three touchdowns. Lots of production to replace with Jeremy Ebert (75 catches for 1,060 yards and 11 touchdowns) and super back Drake Dunsmore (45 catches for 522 yards and six scores) gone. All eyes are on USC transfer Kyle Prater, who could be a true No. 1. Demetrius Fields will be a viable option after nabbing 32 catches for 382 yards and three touchdowns. Christian Jones could be primed for a breakout coming off injury. Rashad Lawrence also will be a factor.

10. Illinois – It will be impossible to replace A.J. Jenkins, a first-round pick who led the Big Ten with 90 catches for 1,276 yards and eight touchdowns. Spencer Harris (26 catches for 226 yards, one touchdown) and Darius Millines (19 catches for 218 yards and a score) must pick up the pace. Harris could be the next star. Ryan Lankford also excites coaches. Cornerback Terry Hawthorne could see action at wideout to inject more playmaking potential, and keep an eye on former safety Fritz Rock. Evan Wilson and Jon Davis have great potential at tight end.

11. Indiana – Fast and explosive Kofi Hughes will carry the flag after leading the squad with 35 receptions for 536 yards and three touchdowns. Jamonne Chester is back after making 21 catches for 240 yards. Duwyce Wilson will figure in the mix after making 17 catches for 217 yards and three touchdowns, as will diminutive speedster Shane Wynn. They must replace the production of departed Damarlo Belcher-booted halfway through last year–and Dre Muhammad. Ted Bolser will be one of the Big Ten?s top tight ends. He made 14 catches for 165 yards and a touchdown in 2011.

12. Minnesota – Da?Jon McKnight was the top Gopher passing game last year, pacing the squad with 51 receptions for 760 yards and four scores. Brandon Green is back after ranking No. 2 with a modest 15 catches for 190 yards and a score. He?s a steady force. Malcolm Moulton, Marcus Jones-back from a knee injury–and Devin Crawford-Tufts-a possible big-play guy–are another veteran options. And keep an eye on incoming freshman Andre McDonald. Tight end Eric Lair will be missed.