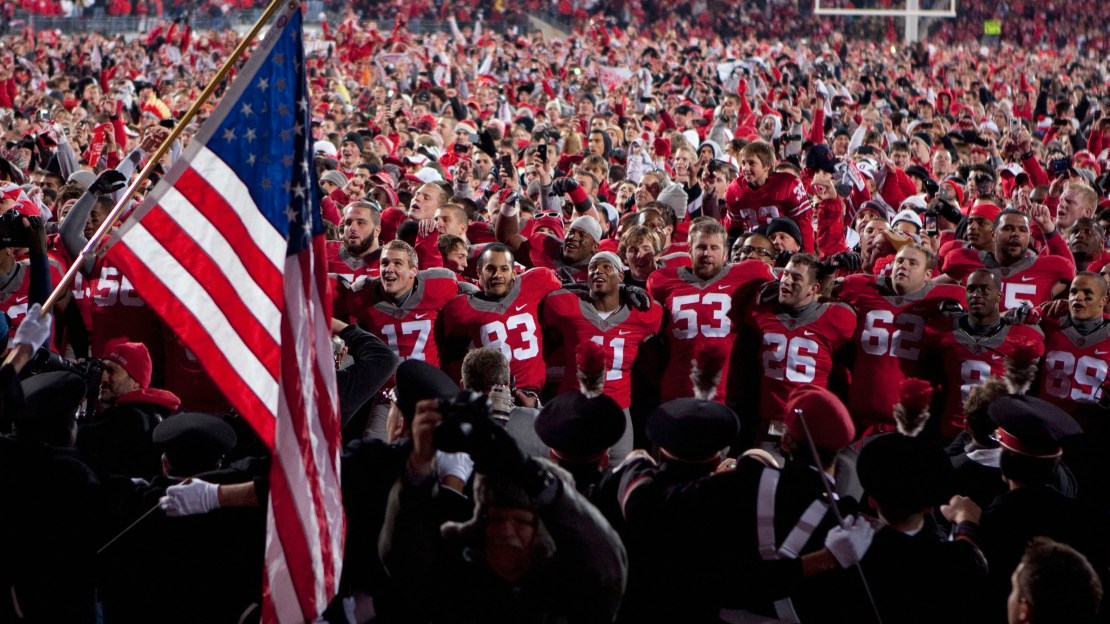 What does the SEC want when it comes to college football playoff? Wisconsin new quarterback is ready to get going, and Ohio State made a schedule adjustment. There's no better way to end your work week than by getting caught up on your Big Ten football information. Just click, read and enjoy. It?s almost as easy as making microwave popcorn.

More talk: The SEC has drawn a line in the sand when it comes to hammering out details for a new four-team playoff format: Take the top four teams in the nation. Period. The Big 12 and Notre Dame agree.

The Big Ten-along with the Pac-12, ACC and Big East–isn?t keen on that idea, however. Instead, Jim Delany?s league wants teams to win a conference championship in order to qualify for selection to a playoff, which would be slated to begin in 2014.

Who is gonna win this showdown between the country?s largest conferences? Stay tuned. The galaxy figures to learn of a compromise sometime on or after June 20, when league honchos convene in Chicago to discuss playoff matters.

It will be interesting to see who blinks first.

But O?Brien?s next look at the Badger playbook will be his first, as per NCAA rules he couldn?t receive it any form until he arrived on campus. But O?Brien figures to be a quick study, considering he graduated from Maryland in a scant three years.

In the end, I wouldn?t be shocked if O?Brien is every bit as effective as Wilson was in 2011. Yes, O?Brien isn?t as nifty with his feet as Wilson, but he?s every bit as good a passer. And he?ll hand off to Montee Ball, perhaps the nation?s top running back. The receivers have promise, and the line is-well, it?s Wisconsin, so the line will be great.

Bottom line: The Badgers may be difficult to unseat as Big Ten champs-because of O?Brien?s arrival.

Scheduling adjustment: Ohio State is dropping a two-game series with Georgia that was slated for 2020-2021. Earlier, the Buckeyes nixed a two-game set with Tennessee in 2018-2019.

It?s not what you think, SEC lovers. No, Ohio State doesn?t fear the SEC. It?s just that the Big Ten?s new scheduling agreement with the Pac-12 has put the squeeze on the Buckeyes? future schedules.
So there.

Huskers reload: Does any program in the nation have a stronger walk-on program than Nebraska? I think not. Check out the latest crop of try-hard overachievers who you know will find some way to make the Cornhuskers better.

So impressive. And the envy of every coach in America.

Getting stronger: Is there a more important member of new Penn State coach Bill O?Brien?s staff than strength and conditioning coach Craig Fitzgerald? I think not. Check out this nice Q&A with the new Nittany Lion muscle coach.

He has been busy making over the bodies of the Nittany Lions, implementing free weight workouts over machine training in hopes of building better and stronger players for the physical Big Ten.

Bring back a classic: Talk of renewing the iconic Oklahoma-Nebraska rivalry is on the table. I hope you are as excited as I am to read this.

If you don?t remember that, go ask your dad. Or, just Google it.

Barry Switzer: "There was one classic, and that was Nebraska and Oklahoma playing at Thanksgiving time for the Big 8 title. That's gone."

My take: The great Barry "Bootlegger?s Boy" Switzer has that right. The Oklahoma-Nebraska rivalry was iconic. I would love to see it revised. But could either team afford to add a tough non-conference game?

For a guy who has had problems delivering on potential, and is No. 1 replacement on decimated D-line, and expected captain, gotta be smarter

My take: Kyle is right about Michigan's Will Campbell. He has to be smarter. He has to be a leader. The Michigan offense should hum along in 2012. It?s the defense that has issues, with most key questions being up front with players like Mike Martin and Ryan Van Bergen gone. Campbell needs to show the way.

My take: Yes, this is true. But I still love the potential of the Michigan State offense. I think Andrew Maxwell will excel at quarterback. And the potential at receiver intrigues with guys like Tennessee transfer DeAnthony Arnett, Tony Lippett and Bennie Fowler. I also love tight end Dion Sims. And all of this skill will work behind what purportedly is the top line of the Mark Dantonio era. Yes, the Spartan offense will be just fine.