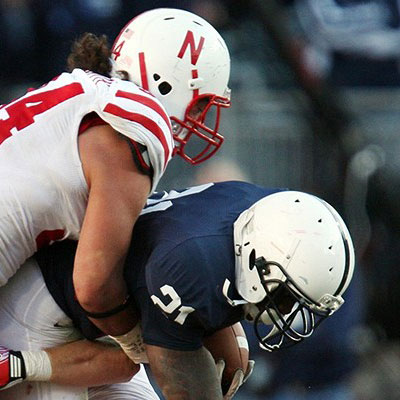 The more I really dig into each week of the 2012 Big Ten college football season with my schedule analysis, the more excited I get about football. In this post I look at Week 11 with my usual categories: top expected stories, my game of the week (hint: it involves the two teams in the video in this post), best quarterback and coordinator matchups, my upset alert, and my game rankings.

Storylines: This Saturday lacks a marquee clash. And it doesn?t help those heavyweights Michigan State and Ohio State are off. ? The top game figures to be Penn State?s trip to Nebraska in a meeting between the Big Ten?s newest members. But, honestly, this inter-divisional game lacks buzz. ? Minnesota has won nine of the last 12 meetings with Illinois. The Gophers? 27-7 win last year in the season finale over Illinois ended a bizarre regular season for the Illini as it was Illinois? sixth loss in a row following six consecutive wins. ? Wisconsin has won the last eight meetings with Indiana. And the Badgers have scored at least 31 points in each victory, eclipsing 50 points four times including that memorable 83-point effort in 2010. ? Purdue hasn?t won at Iowa since 1992 and is 1-11 in its last 12 trips to Iowa City. How lopsided has this series been the past 30 years? Since the Boilermakers beat the Hawkeyes in 1980, they have just six wins and a tie in 25 meetings. ? The last time Northwestern visited Ann Arbor, in 2008, it beat Michigan, 21-14.

Game of the week: Penn State at Nebraska. This could be a defensive battle between the two newest members of the Big Ten-Penn State joined in 1993; Nebraska in 2011. The last time the Nittany Lions visited Lincoln was in 2003, when the Cornhuskers took an 18-10 victory. In that game, now Nebraska coach Bo Pelini was the Cornhuskers? defensive coordinator. If the Huskers want to win the Legends, they likely must defend their turf. A Penn State win would be a brick in the wall of Bill O?Brien?s foundation and could wrap up a bowl bid.

Quarterback matchup to watch: How about Minnesota?s MarQueis Gray vs. Illinois? Nathan Scheelhaase? Each is a dangerous dual-threat signal-caller. Scheelhaase is looking to lead the Fighting Illini to a bowl for the third season in a row. Gray is looking to take the Golden Gophers to the postseason for the first time since 2009. This could be a huge game in both team?s bowl hopes, as you know each program feels it can win. By the way: Gophers? coach Jerry Kill and Illini coach Tim Beckman faced off two times in the MAC, when Kill was at Northern Illinois and Beckman was at Toledo. They split the two meetings, with Toledo winning 20-19 at home in 2009 and Northern Illinois winning 65-30 at home in 2010.

Coordinator matchup to watch: I like the battle that pits Penn State defensive coordinator Ted Roof against Nebraska offensive coordinator Tim Beck. Roof is a wily vet who likes to dial up aggressive defenses. Beck?s offense needs to show better balance vs. a Nittany Lion defense that should have a strong front seven to protect a rebuilt secondary. Can Cornhusker quarterback Taylor Martinez make something happen with his arm? Or will Roof?s defense confound him?

Upset alert: Could Purdue win at Iowa? It hasn?t happened since 1992, as the Hawkeyes have dominated the series. But this is the type of road game the Boilermakers need to win vs. a retooling Hawkeye squad to take the next step in their development as a program under Danny Hope, who purportedly has his best team yet. The schools are permanent cross-division rivals but only have played one time in the past three seasons. Iowa has won the past two encounters, with the Boilermakers? last triumph coming in West Lafayette in 2007.

Ranking the Nov. 10: Games
1. Penn State at Nebraska
2. Purdue at Iowa
3. Northwestern at Michigan
4. Minnesota at Illinois
5. Wisconsin at Indiana