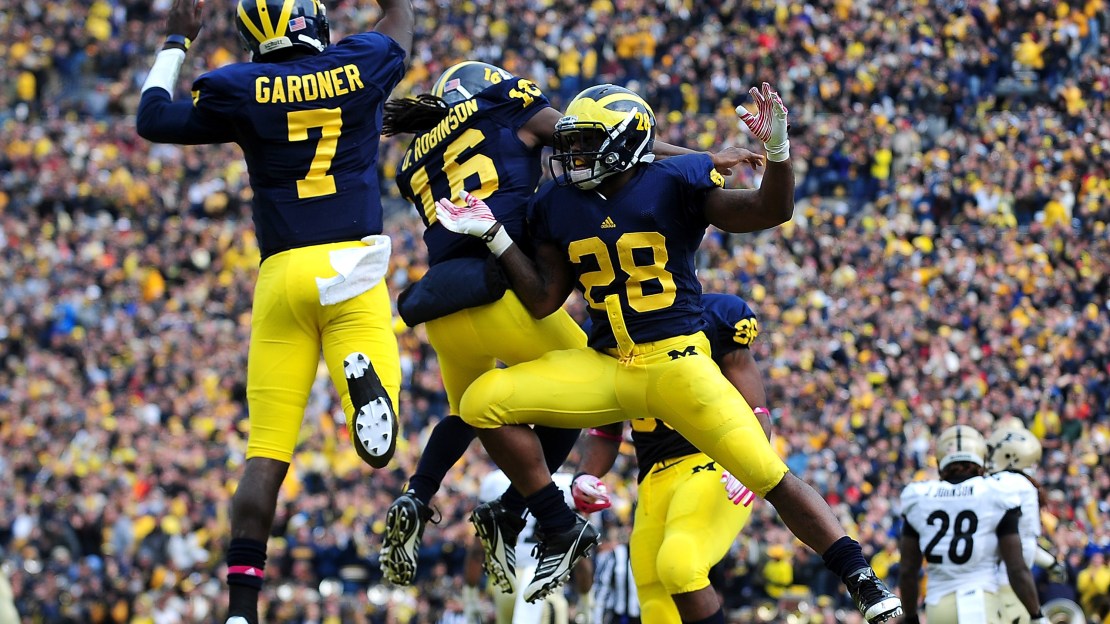 Every championship team needs a good quarterback. And it?s also helpful to have a decent backup, as injury often is commonplace in this era of running signal-callers.

Knowing that, which Big Ten team has the best quarterback situation? I rank the Big Ten quarterback situations, from 1 to 12, in my first installment of Big Ten unit rankings. Tell me what you think by posting your thoughts in the comment box at the bottom of the post.

1. Michigan – It begins with senior Denard Robinson, perhaps the most dangerous quarterback in college football and a legit Heisman contender. In 2010, he was Big Ten MVP and became the first quarterback to rush for over 1,500 yards and pass for over 2,500 in a season. Devin Gardner may be the top athlete on the roster, which is why coordinator Al Borges is trying to find ways to get the junior onto the field. Redshirt freshman Russell Bellomy continues to make strides.

2. Ohio State – Braxton Miller is the best combination runner/passer in the Big Ten who has a growing grasp of the Buckeyes? new spread scheme. But he must develop better touch and understanding of defenses-while also becoming more of a leader. The new staff likes backup Kenny Guiton, a junior who is equally adept at passing as he is running. He just lacks experience.

3. Purdue – Caleb TerBush was thrust into the starting role last August after Rob Henry got hurt. And TerBush showed progress as a passer and decision maker in leading the Boilermakers to their first bowl since 2007. He?ll be pushed by Robert Marve, who was granted a sixth season of eligibility. He finally looks healthy after being dogged by knee issues since arriving at Purdue from Miami (Fla.). In fact, don?t be shocked if the former Florida Mr. Football ends up starting. Purdue also has Henry back. Look for coaches to find ways to use him in various formations-or even as a running back.

4. Wisconsin – The arrival of Maryland transfer Danny O?Brien saved the day in Madison. The junior is a proven passer who was ACC Rookie of the Year in 2010. O?Brien has a solid arm and understands the game, but he can force the action. Joel Stave, a big redshirt freshman, looked good in the spring after arriving on campus as a walk-on. If he had to play, the coaches wouldn?t freak out.

5. Nebraska – No one doubts the athletic ability and running skills of junior Taylor Martinez. But he needs to pass better, and he worked on his footing in the offseason to help. Will it help? No doubt, playing in the same offense for a second year in succession will help after Martinez has worked with Shawn Watson and now Tim Beck. If Martinez goes down, it?s a big drop off to backup Brion Carnes, a sophomore long on potential but short on production.

6. Illinois – Junior Nathan Scheelhaase has taken the Fighting Illini to bowls each of the past two seasons. That hasn?t happened in Champaign since a five-year run from 1988-92. Scheelhaase?s is an underrated passer who also can run, as he continues to improve his decision making. But his passing still needs work. Reilly O?Toole looks like an NFL quarterback. He got his feet wet last season as a true freshman and looks to have a bright future.

7. Minnesota – MarQueis Gray, a senior, is built like a linebacker. And he sometimes passes like one, too. But Gray is getting better now that he?s a full-time quarterback working for a stable staff. And a second season in Jerry Kill?s offense, no doubt, will help. Massive Max Shortell saw significant action as a true freshman last season, proving to be more than capable of running the attack in eight games and two starts.

8. Iowa – Looking for the best passing Big Ten quarterback? Look no further than James Vandenberg, who is primed for a big senior season. His skills will be enhanced by new coordinator Greg Davis, who is terrific at molding signal-callers. It?s key for Vandenberg to show he can win big games on the road. The backup situation is iffy, as redshirt freshman Jake Rudock is on deck.

9. Michigan State – Andrew Maxwell, who has waited three seasons for this, is lauded by many as a better athlete and passer than the departed Kirk Cousins. But is the junior a leader? And can he deliver in the clutch? Maxwell?s development will be key to the Spartans? hopes to win the Legends again. Connor Cook is a redshirt freshman who showed a grasp of the offense and potential in the spring game. This duo could move up the chart quickly as its body of work expands.

10. Penn State – This is the ultimate mixed bag. It looks like senior Matt McGloin likely will be named the starter, but he has physical limitations. Some reports had junior Rob Bolden transferring, but all signs say he will be back. But he struggles with his decision making and pocket presence. Paul Jones is an exciting prospect who redshirted in 2010 and missed last year due to academics. He?s a dark horse to watch. Incoming freshman Steven Bench is a dual-threat who could make some noise.

11. Northwestern – Junior Kain Colter showed great promise last season. Who can forget his second-half heroics in leading the Wildcats to a win at Nebraska last season? He?s a fantastic athlete who also has played receiver, but he must refine his game as a passer and decision maker. Bottom line: Colter needs to become more of a true quarterback. Trevor Siemian turned heads with a strong spring and looks to have a bright future.

12. Indiana – With Edward Wright-Baker and Dusty Kiel transferring, the job looks to belong to Tre Roberson, who showed exciting playmaking skills as a true freshman in 2011. But the staff makes no bones about it: This offense needs to pass more and better to win. Is Roberson the answer? If not, junior-college transfer Cameron Coffman, whose dad Paul was a star tight end for Kansas State and in the NFL and whose brothers Chase (tight end Missouri) and Carson (quarterback Kansas State) also were football stars, may get a shot after taking part in spring drills. Incoming freshman Nate Sudfeld could be a factor, too.