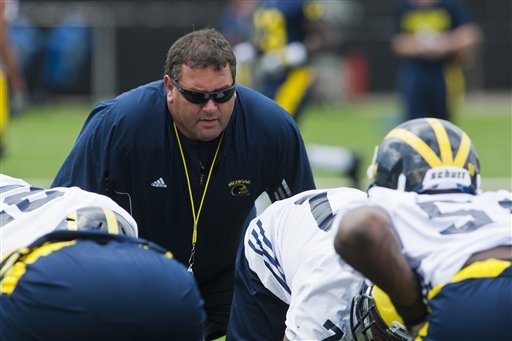 A look at what?s buzzing in Big Ten football circles as you rebound from a gloriously hot Memorial Day weekend.

It seems we never grow weary of speculation/conjecture about Notre Dame possibly joining the Big Ten. Here?s more from Scott Dochterman of the Cedar Rapids Gazette.

This is a well-conceived plan that even includes a proposed three-division format.

I likey. But, I?m not getting my hopes up-and neither should you.

Tough runs: Bruce Feldman of CBSSports.com recently ranked the 10 toughest schedules in the nation. And look who is No. 4: Michigan, the only Big Ten school on the list. It?s hard not to disagree. Look at this to-do list for Brady Hoke?s crew:

If the Wolverines can win 10 regular-season games again against this slate, it will be a very impressive feat.

Worth it? The great David Jones of the Harrisburg Patriot-News asks the following question in a video blog: Is a four-team playoff really better than the BCS if no small-conference team can make it?

Moving on: Remember Bubba Starling? Surely Nebraska fans do. For the uninformed, Starling was the uber recruit who broke Bo Pelini?s heart by opting for a pro baseball career and sweet $7.5 million signing bonus instead of slipping on a white Nebraska helmet to play quarterback.

Isn?t it fun to play the ?what if? game? You know: What if Starling had opted to attend Nebraska as a quarterback? Would he have unseated Taylor Martinez by now? Or, would the competition have made Martinez even better?

Early success: The preview magazines have hit the newsstands! Hallelujah! Randy Peterson of the Des Moines Register takes a look at the Big Ten?s three new coaches: Ohio State?s Urban Meyer, Illinois? Tim Beckman, and Penn State?s Bill O?Brien. Which one will have the most success is Year One?

My guess: Meyer. It?s pretty obvious, too. He has the most talent of perhaps any team in the Big Ten. And his Buckeyes will be motivated to excel in the regular season, knowing they can?t win the Big Ten or play in a bowl.

Please, no: Nebraska chancellor Harvey Perlman continues to insist that a plus-one postseason model is the best option. I have nothing left to say about this stance.

Preseason honors: The one-and-only Phil Steele is out with his four-team preseason All-American squads. Only two Big Ten players are on the first team. One isn?t a surprise: Wisconsin running back Montee Ball. The other is a surprise: Ohio State defensive tackle Johnathan Hankins. Really, Hankins is the best defensive lineman in the Big Ten? Better than teammate John Simon (second team) and Purdue?s Kawann Short (third team)? Wow.

On this date …:Where were you last Memorial Day? Jim Tressel surely remembers: He was fired as Ohio State coach.
Rob Oller of the Columbus Dispatch thinks the event was one of the most noteworthy in Ohio State annals, ranking right up there with the Buckeyes? national titles in 1968 and 2002 along with Woody Hayes firing in 1978,

I have to agree. But, as Oller points out, if new Buckeye boss Urban Meyer leads Ohio State to a national title-the memory of Tressel?s unceremonious ouster will fade.

New year: Speaking of Ohio State, keep an eye on linebacker Curtis Grant. He arrived on campus last year as the most heralded player in the 2011 Buckeye recruiting class. But Grant arrived heavy and was slow to pick up the schemes. Consequently, he was largely relegated to special teams. But Grant has slimmed down and impressed in spring drills. And that?s good news for an Ohio State linebacking corps that will include Ryan Shazier, Storm Klein and Etienne Sabino in addition to Grant and has a lot to prove.

Radar love: We all know the top talents at Penn State. But Bill O?Brien recently offered three under-the-radar names to watch: defensive end Deion Barnes, linebacker Mike Hull, cornerback Adrian Amos. And it?s Amos who may be most critical for a secondary that?s replacing four starters and may have depth issues.

My take: This is all good news for Nebraska?s visit to UCLA in September, right?

My take:This is a real blow to Purdue, as Gonnella was lauded by many as being a huge reason why Danny Hope was able to land his best recruiting class yet in West Lafayette. The fact Nick Saban pursued Gonnella validates his value as a personnel director.