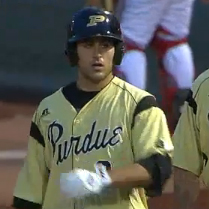 After winning the Big Ten's regular season and then winning the school's first Big Ten tournament championship, Purdue's baseball team now knows what they'll be doing as a No. 1 regional seed in the first round of the NCAA baseball tournament. Michigan State landed in the field of 64, too.

The Boilermakers will play Valparaiso in the first round on Friday and they'll be hosting the NCAA regional in Gary, Indiana. Kent State and Kentucky are the other two teams in that regional. Our friends at Purduesports.com have plenty of baseball coverage that includes live game blogs for each Purdue game. Scouting report on Valparaiso: They haven't been to the tourney in 44 years.

Congrats to @statebaseball on earning an at-large bid to the NCAA Tournament. Well deserved. #B1Gbaseball

The No. 3 regional seeded Spartans will play No. 2 seed Pepperdine on Friday in the NCAA regional in Palo Alto, Calif. Stanford and Fresno State are the other two teams in that regional. There's much more at MSUSpartans.com.

The full 2012 tourney bracket is at NCAA.com.

An NCAA Regional features a double elimination format – here's a good list of all of them. The opening weekend of the NCAA Championship features 16 four-team Regionals in a double-elimination format. Regional play runs from June 1-4 with the 16 winners advancing to Super Regionals. The eight two-team Super Regional sites will be determined on Monday, June 4, with play scheduled for June 8-10 or June 9-11 in best-of-three series. The Men?s College World Series will take place June 15-26 at TD Ameritrade Park in Omaha, Neb.