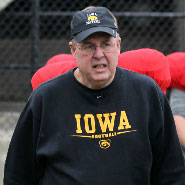 After years of stability under Kirk Ferentz, the Iowa coaching staff has undergone a big transformation. How big? For the first time since taking the job in 1999, Ferentz will have new coordinators. Defensive coordinator Norm Parker retired, while offensive coordinator Ken O?Keefe left to take a job with the Miami Dolphins. Ferentz promoted defensive backs coach Phil Parker to run the defense. But Ferentz went outside the Iowa family when it came time to find an offensive coordinator and hired Greg Davis.

Davis is a respected offensive mind who most recently pushed the buttons on the Texas offense from 1998-2010 under Mack Brown. In that time, Davis had some prolific attacks led by quarterbacks like Vince Young, Colt McCoy and Chris Simms for a program that won the 2005 national title and played for the 2008 crown. His 2005 attack set a then-NCAA standard with 652 points (50.2 ppg). But Davis was forced out following the 2010 season and didn?t work in 2011. Still, he has plenty of tread on his tires-and a fertile mind.

In the spring, Davis began putting his fingerprints on a Hawkeye attack that in the minds of many had grown stale and predictable. Iowa ranked seventh in the Big Ten in total offense last season (372.5 ypg). It?s Davis? job to punch up the Hawkeye attack.

I caught up with him earlier this week to get his thoughts on his offense and a few other subjects in the latest of my Big Ten Q&A sessions.

Q: When fans sit down to watch Iowa this season, what can they expect to see?
A: When I first started visiting with Kirk, he told me that I had done this a long time and that I had done a lot of different things. And I told him that I tried to do what our players could do. I had never run zone-read until a guy named Vince Young showed up. We tried to capitalize on his unique skills. Colt McCoy was one of the most accurate passers in the history of the game. We tried to capitalize on his skills. Going back to 1998, with Ricky Williams, we were primarily a two-back team. My philosophy is to always take what you have and make sure that is where your focus is.

Q: What did you work on this spring?
A: They have done a great job here over the years running the zone and various stretch plays and those kind of things. We want to continue to be able to do that.

We want to be able to get into two backs and come down hill. We want to get into two tight ends and do some things. We also want to be extremely proficient with the pass. We want to do some no-huddle stuff but we don?t intend to become a no-huddle team. We did work on it this spring quite a bit. The kids liked it. That will be a part of every game plan. How much we use it will depend on who we are playing and different factors.

It won?t be something drastically different where we are in empty (backfield) for 30 snaps. We have a real good line, good tight ends, solid backs, we will try to let the playmakers make plays. We do want to play at a faster tempo when we choose to and create some problems, and we do want to play with multiple personnel groups.

Q: Does James Vandenberg remind you of any other quarterbacks you have worked with?
A: I coached Gary Kubiak at Texas A&M, Eric Zeier and Mike Bobo at Georgia, Major (Applewhite), Chris Simms ? the think these guys have in common is No. 1, they love the game. James has a passion for the game. He has a passion for understanding it. Every day, if we met at 2:30, I would go in at 2:15 to set up and write on the board, he would be in there already asking me questions.

He?s an extremely accurate thrower. He can make all the throws. There?s a lot of similarities. Intelligence, arm quickness and those kinds of things are common traits among the guys I have had that have been really good players.
So, to say he reminds me of one guy I have coached, I can?t really do that. There is a common thread that jumps out to me about good quarterbacks, and James certainly has them.

Q: Where were you at when Kirk first called you about your interest in the job?
A: I was at my house in Colleyville, Texas, outside of Dallas. Kirk called and asked if I had interest in the job and I said I did. He was trying to do background on several guys and it went from there.

Joe Philbin, the new head coach of the Miami Dolphins, was a G.A. for me at Tulane a long time ago. Over the years, we have stayed in touch. I had him come speak at Texas. Through Joe I met Ken O?Keefe, who came to Texas once to talk ball with us. And we played Iowa in the Alamo Bowl (2006). I met Kirk there and met him again in New York at another awards function. I kinda knew him but didn?t know him.

When Ken decided to go to the Dolphins (to join Philbin), Joe and Ken recommended me. And Kirk called Jim Caldwell (former Colts head coach), an Iowa guy, and he spoke highly of me.

So, I was in my living room (when I got the call). Hung the phone up and told me wife it was Kirk. He wanted to know if I had interest, and I said I did. From there, things moved quickly.

Q: How are you at receiver?
A: We aren?t where we need to be in terms of foot speed. We have to improve in that area. They had begun to address it. But there are good tight ends, good solid running backs.

We will work with what we have (at receiver). I think Kevonte Martin-Manley had a really good spring for us. Really was quick to pick things up. He will predominately be a slot back for us. Keenan Davis was doing really well but had a hamstring pull and missed six practices in the middle. He came back to his credit and played because he wanted to be involved. I am encouraged by that. Don Shumpert and Steven Staggs had solid springs, too. But we need to improve the speed on the outside.

Q: What did you do with your year away?
A: I tried to stay involved. I went to Florida, Auburn and Iowa State. At some places, I (worked at some clinics). Others were just visits. In the fall, I went to Tulane where my son coaches. Then I visited my good friends Larry Fedora and Blake Anderson, who were at Southern Miss and now are at North Carolina. I sat in on meetings as they installed things. In the season, I would watch a high school team practice and visit with coaches. On Saturdays, I would watch a few games and tape others and would watch them later in the week and would make notes to see how people did things.

It was fun. I think I became a better coach because of it all. You can back off and see how other people do things.

Q: Do you still talk to Texas coach Mack Brown?
A: Sure. I was with him 18 years. He?s one of the great guys in the business. I?m sure Kirk and he talked about me during the process. We remain friends.