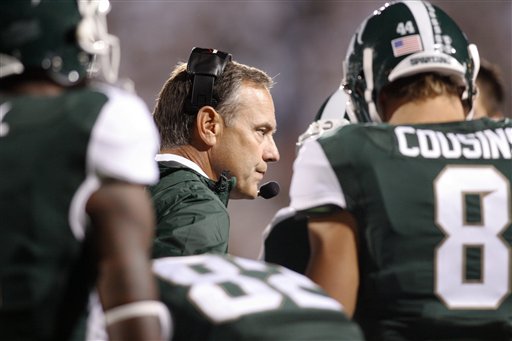 Each week of the college football season offers a variety of games for fans to watch. I?m taking a super-early look at each week of the Big Ten season as a way to preview the 2012 campaign. Find my Week 3 schedule analysis in this post and watch our feature on Michigan State's memorable 2010 win over Notre Dame now. Here's my Week 1 and Week 2 posts, too, if you missed them.

Storylines: Arkansas State will be Nebraska?s third foe in a row with a new head coach, with former Auburn offensive coordinator Gus Malzahn in control. The Cornhuskers need to be on upset alert vs. a Red Wolves team that is led by dangerous quarterback Ryan Aplin. Arkansas State went 10-3 en route to winning the Sun Belt in 2011. ? Illinois foe Charleston Southern is a FCS foe that went 0-11 last season. ? Ball State beat Indiana, 27-20, last season in Lucas Oil Stadium in Indianapolis. ? Northwestern won at Boston College, 24-17, in 2011; the Eagles went 4-8 last season. ? The Hawkeyes needed to block two Northern Iowa field-goal attempts in the closing seconds in 2009 to avoid embarrassment. ? Western Michigan is the only bowl team among Minnesota?s non-conference foes.

Game of the week: Notre Dame topped Michigan State, 31-13, last year and has won two of the last three meetings, so the Spartans are thinking revenge. And, know this: Notre Dame hasn?t won in East Lansing since 2006. The last time the Irish visited Michigan State, the Spartans won 34-31 by scoring the winning touchdown on a fake field goal in overtime. After the game, MSU coach Mark Dantonio suffered a mild heart attack.

Quarterback matchup to watch: Utah State was a bowl team last season and almost won at Auburn. Why? It was largely because of Aggie quarterback Chuckie Keeton, who is back after a sensational debut in 2011. He?ll likely face off with Danny O?Brien, who is expected to win the starting job at Wisconsin after transferring from Maryland.

Coordinator matchup to watch: When Charley Molnar left to coach UMass, Notre Dame coach Brian Kelly promoted Chuck Martin-who was safeties coach and recruiting coordinator–to run the offense. Martin, who was a highly-successful head coach at Division II Grand Valley State, will square off vs. Michigan State defensive coordinator Pat Narduzzi, who is one of the best in the business. Whoever wins this showdown will give his respective team a great chance to prevail. Will the Irish offense have success vs. what could be the Big Ten?s top defense?

Upset alert: Navy is coming of a 5-7 season, but the Midshipmen always are well coached by Ken Niumatalolo and a tough out with their confounding option offense. Preparing to face that option attack always is a tough task. It will be fun to watch sage Nittany Lions defensive coordinator Ted Roof try to combat the attack of touted Navy offensive coordinator Ivin Jasper.