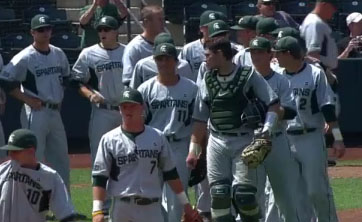 Senior co-captain Tony Bucciferro allowed just two runs and struck out five in eight innings to lead the Michigan State baseball team past Nebraska, 10-9, in the first round of the Big Ten Tournament Wednesday afternoon at Huntington Park. Michigan State (36-19) collected 17 hits and appeared to have the game in hand with a 10-2 lead going into the bottom of the ninth inning, but Nebraska (34-22) rallied for seven runs in its final at-bat. Read more at MSUSpartans.com and follow @statebaseball on Twitter.

Nebraska (34-22, 14-10 Big Ten) nearly completed one of the biggest comebacks in program history on Wednesday afternoon at the 2012 Big Ten Tournament, but a leaping catch by Michigan State second baseman Ryan Jones on a line drive off the bat of Pat Kelly sealed the win. The Huskers entered the bottom of the ninth inning down 10-2, but five two-out runs had the Huskers in position to tie the game with Kale Kiser at third base and Kelly at the plate. See that last play here, and then read more at Huskers.com. Follow @Huskers_baseball on Twitter.

Watch all of our video from Michigan State's win over Nebraska: