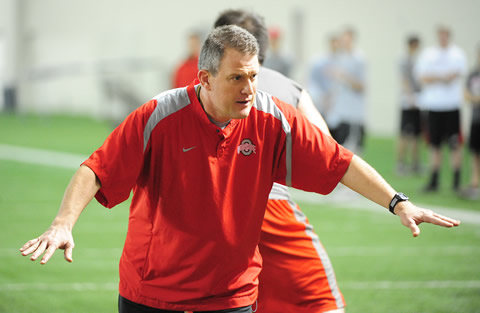 Urban Meyer has built an impressive staff at Ohio State. On defense, Meyer retained coordinator Luke Fickell and lured Everett Withers from North Carolina to help run the unit. On offense, Meyer tabbed Tom Herman from Iowa State to serve as coordinator. And the offense will be co-coordinated with Ed Warinner, one of the nation?s most respected-and underrated-offensive minds.

Warinner brings an impressive resume that includes stops at Notre Dame, Kansas (twice), Illinois, Air Force and Army, among other jobs. Warinner was offensive coordinator at Kansas and run-game coordinator at Illinois and Notre Dame, where he worked the past two seasons under Brian Kelly. Warinner?s Jayhawk offenses were among the best in the nation, helping Kansas cap a 12-1 season by beating Virginia Tech in the Orange Bowl after the 2007 season.

Now, he wants to put his mark on Ohio State as co-offensive coordinator and offensive line coach. Warinner?s primary task will be coordinating the running game. The Ohio native and 1984 Mount Union graduate has worked with four offenses during his career that have led the nation in rushing.

Warinner is taking over a line in flux. Gone are center Michael Brewster along with tackles Mike Adams and J.B. Shugarts. The unit began taking shape in the spring, with Jack Mewhort at left tackle; Andrew Norwell at left guard; Marcus Hall at right guard; Corey Linsley at center. Right tackle? It?s a work-in-progress with three players battling.

I caught up with Warinner to get his thoughts on the Buckeye offense and line while he's on the road recruiting.

Q: What can fans expect to see from the Ohio State offense under Urban Meyer?
A: More balance, for sure. As things wound down last year, I think they were throwing the ball about 10 times a game. They will see more spread formations. They?ll see more option-oriented offense in terms of the quarterback having options to give, run, pitch ? things like that. They were more of a power, I formation, down-hill run team last year. We have some elements of that. But we will spread it around. We have some playmakers. We have good running backs and tight ends who can do some things and we are developing some wideouts. It will be about getting the ball into playmakers? hands.

Q: Who will be some of the playmakers for the offense?
A: Our running back (Jordan Hall). He really didn?t play in the spring game. In practice, he has shown that he?s a pretty good player. (Quarterback) Braxton Miller is a playmaker. He touches the ball every play. (Receiver) Devin Smith could be a playmaker. The freshman wideout (Michael Thomas) who did a nice job in the spring game. He had 12 catches. Corey Brown is going to be a good slot receiver. Carlos Hyde is coming along at running back. I think he will be pretty good. The (Zach) Boren kid as a fullback-H-back will be a playmaker for us, too. Jake Stoneburner at tight end. We will have a lot of different guys.

Q: Is this offense similar to any offense you have been a part of?
A: It?s different. There are elements of the spread that are common. It?s about 40 percent the same as the offense we had at Kansas. Our personnel is different here that will allow us to do some different things. With (Kansas quarterback) Todd Reesing, we weren?t gonna run a lot of zone read. But we had it in our offense and scored the winning touchdown vs. Virginia Tech in the Orange Bowl with it. They weren?t expecting it. Braxton Miller will run more zone read. There are passing concepts that are similar, so maybe it?s about 50 percent the same (as Warinner?s Kansas offense).

Q: How is the talent level?
A: We have enough talent to be successful on both sides of the ball. For sure. We have good kids. They work hard. They recruited good players to come to Ohio State. I think we will be happy with these guys and we?ll keep adding to it. Urban is a great recruiter. We can spread our wings and recruit nationally a bit more for certain positions of need we can?t find in the state of Ohio.

Q: How is the line coming together?
A: It?s coming together well. It was a concern coming in. But the guys have worked hard. They are in good shape and becoming more disciplined, tougher. We were really concerned at the start when we took over but have seen a lot of transformation. We lack some depth but do have some young guys who are coming who hopefully will supple some depth and get where they need to be by the fall. The linemen had to adjust to the offense, as the spread was different from what they were doing.

Q: Did you ask the linemen to lose weight?
A: We had to get leaner. We put them on a diet and leaned out. They also must adjust to using a two-point stance, a new cadence, a new numbering system, a no-huddle look.

Q: Who will be the leader?
A: Jack Mewhort is one leader at tackle. Corey Linsley is the other at center.

Q: How is the right tackle spot shaping up?
A: That?s a position that?s still up in the air. We moved tight end Reid Fragel there. He is coming along and developing. We also have a true freshman (Taylor Decker) who came for spring ball who has really looked good. He could be the guy. We moved a defensive end there, Darryl Baldwin. It?s between those three guys. One played tight end, one played d-end and one was in high school last season. I have three guys with ability but have no experience. Getting them ready is my challenge. They have the tools.