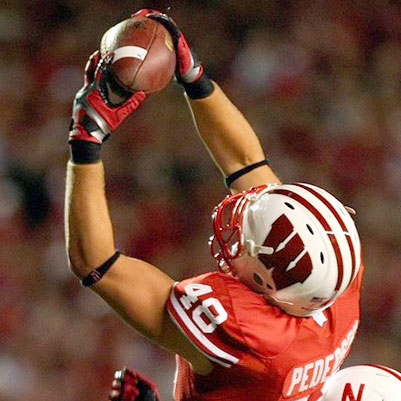 The tight end spot continues to evolve into a more prominent position across the football landscape, as teams are featuring them more often as vertical passing threats.

The Big Ten is no different, featuring some dynamic and athletic weapons that can work the middle of the field as ?move? tight ends who line up in a variety of positions and often are in motion. And so, here my ranking of the top 10 Big Ten tight ends heading into the 2012 season.

2. C.J. Fiedorowicz, 6-7, 265, Iowa, Jr. Keep an eye on the big fellow, who could be the next great tight end at Iowa. And that?s saying something for a school that recently has produced the likes of Dallas Clark and Scott Chandler in recent seasons. Fiedorowicz made 16 catches for 167 and three touchdowns in 2011. Look for those numbers to double-and then some.

3. Jake Stoneburner, 6-5, 245, Ohio State, Sr. The rangy Stoneburner has become a better blocker, which complements his underrated pass-catching skills. Last season, Stoneburner caught 14 passes for 193 yards and a team-high seven touchdowns receptions, showing how impactful he can be in the red zone. Urban Meyer likes to use tight ends, which is good news for Stoneburner.

4. Ben Cotton, 6-6, 255, Nebraska, Sr. He is a big, steady target who caught 14 passes for 189 yards in 2011. Cotton, an honorable mention All-Big Ten choice last season, is effective as an in-line blocker but also can move the chains as a massive option on third downs. No doubt, Taylor Martinez will look for him on third downs.

5. Kyler Reed, 6-3, 230, Nebraska, Sr. He has been one of the Huskers? steadiest pass-catching options in recent years, making 15 catches 257 yards and a touchdown in 2011. Reed is a speedy athlete who excels getting down the field and out running linebackers and over powering safeties. He and Ben Cotton will be the top tight end tandem in the Big Ten.

6. Jon Davis, 6-3, 230, Illinois, So. He was one of the most promising freshman tight ends in the nation last season, making 22 catches for 187 yards and a score. Davis is more of a ?move? tight end or H-back, best suited to be used in motion, split out or lined up in the backfield. He?s a good athlete and a difficult matchup for defenses. Davis will form a nice duo with junior Evan Wilson in the new Illini offense.

7. Dion Sims, 6-5, 280, Michigan State, Jr. This is based on potential, as the sky is the limit for the mammoth Sims, who was limited by playing the second half of last season with a broken hand. But Sims still made 12 catches for 99 yards and three scores. He?s an athletic freak who could be special.

8. Ted Bolser, 6-6, 255, Indiana, Jr. He?s a steady target whose role could increase as the Hoosiers put even more of an emphasis on passing the ball. Bolser caught 14 passes for 165 yards and a touchdown last season. A massive man, Bolser also excels as a blocker for the Hoosiers, who will look to him to be a threat in the red zone and on third downs.

9. Crosby Wright, 6-3, 248, Purdue, Sr. A former walk-on, Wright has steadily worked his way into the lineup and is emerging as a reliable target. He made 16 receptions for 223 yard and two scores last season. Wright will form a nice tandem with junior Gabe Holmes, whom Danny Hopes raves about. Holmes caught 11 passes for 133 yards and a score last year.

10. Brandon Moore, 6-5, 255, Michigan, Sr. He is ready to become a leader and key contributor after four mostly quiet seasons in Ann Arbor. He has just two career catches in 17 games. But Moore?s potential as a pass catcher and blocker is good. He needs to become more consistent, especially as a blocker. But the potential and maturity are there for him to put it all together.