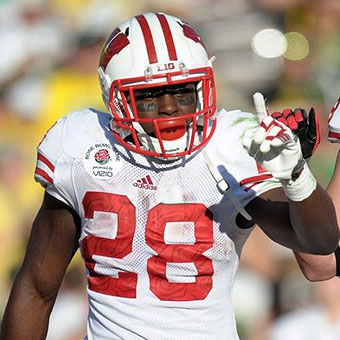 In my last Big Ten football schedule analysis post, I examine Wisconsin, your defending Big Ten champions. What will be the Badgers' toughest non-conference and conference games? Where does the schedule get really rugged? Go ahead and guess which game I call their ?must win? game, then read the rest of this post to what else I picked.

I've done all 12 programs now and you can find all of my Big Ten schedule posts here. As for Wisconsin, tell me what you think about its schedule in the comments section of this post, or come tell me on Twitter and Facebook.

Toughest non-conference game: This is a tough one. Why? Because there really aren?t any scary ones in what may be the softest non-conference schedule of any Big Ten team. If I have to pick one, I?ll go with the game at Oregon State on Sept. 8. But remember: The Beavers are coming off a 3-9 season and got clobbered, 35-0, in Madison last year. But Oregon State is well coached by Mike Riley. So, the Beavs have that going for them ? which is nice.

Who they don?t play: Iowa, Michigan, Northwestern. This works out well for the Badgers. If Michigan State isn?t the best team in the Legends Division, then Michigan may be. And Iowa is, well, Iowa-always a tough, hard-nosed, well-coached team.

Easiest game: When UTEP visits on Sept. 22, it may be overmatched and overwhelmed. The Miners went 5-7 in 2011 under Mike Price, whose program has been to one bowl in the last six seasons.

Rugged stretch: The season ends with a tough 1-2 punch, as Ohio State visits on Nov. 17 followed by a trip to Penn State on Nov. 24. But a three-game skein from Sept. 29-Oct. 13-at Nebraska, vs. Illinois, at Purdue–may be more perilous. The Cornhuskers and Boilermakers want revenge after getting absolutely thumped last year in Madison. Nebraska lost, 48-17, and Purdue fell, 62-17. And, who knows what the Illini will look like under new coach Tim Beckman?

Best chance to be upset: Wisconsin may be favored in all of its games. But keep an eye on the Buckeyes when they visit Mad City on Nov. 17. Ohio State registered a shocking 33-29 win over the Badgers last season, when Braxton Miller hit Devin Smith with a 40-yard scoring strike with 20 seconds left in the game. This figures to be a de facto Leaders Division title game, but the Buckeyes aren?t eligible to win the league title. Still, it will be a tremendous tilt. Ohio State has won four of the last five meetings, and is 4-2-1 in its last seven trips to Madison.

Best chance to pull an upset: If there is a game that the Badgers are underdogs, it may be in their Big Ten opener at Nebraska on Sept. 29. You know Cornhusker coach Bo Pelini is aching to whip Wisconsin after being embarrassed last season in this game. It?ll be fun to watch this battle of running backs: Nebraska?s Rex Burkhead vs. Wisconsin?s Montee Ball.

Must win: Michigan State and Wisconsin arguably have become the two top programs in the Big Ten. So, when the Spartans visit on Oct. 27, the Badgers will want to send a message that they remain the lynchpin of the conference after advancing to the Rose Bowl in each of the past two seasons. Michigan State hasn?t won in Madison since 2001, losing its last three trips.

Bye week: Nov. 3. Decent timing. Think of this as Wisconsin?s one last breath before finishing the season. The Badgers will have played nine games by the time they reach their bye. Wisconsin then finishes the season at Indiana; vs. Ohio State; at Penn State.