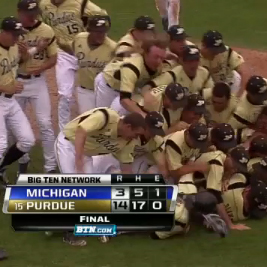 For the first time in 103 baseball seasons, the Purdue Boilermakers are at least Co-Big Ten Champions after beating Michigan, 14-3 on Saturday. The 1909 Boilermakers won the seven-team Big Ten with a 7-2 conference record. Purdue has come up short before finishing in second place in 2001, 2005 and 2008.

Last year, the Boilers finished only one game behind co-champions Illinois and Michigan State. Click inside for Saturday's roundup, and use the comprehensive  live national scoreboard to track games live every weekend.

PURDUE 14, MICHIGAN 3: Lance Breedlove pitched seven innings of one-hit ball, retiring the final 20 batters he faced, and No. 14 Purdue scored in seven consecutive innings to blowout Michigan, 14-3, and in the process clinch the program's first Big Ten Conference title since 1909. The Boilermakers (39-9, 16-4 Big Ten) assured themselves of at least a share of the regular-season league title. They can clinch the championship outright with a win Sunday. Read more at Purduesports.com.

PENN STATE 8, ILLINOIS 6: Penn State baseball (26-24, 12-8) picked up its sixth win in its last seven Big Ten games and clinched its fifth-straight conference series, defeating the Illinois Fighting Illini by a score of 8-6 on Saturday afternoon. Read more at GoPSUsports.com.

INDIANA 5, NORTHWESTERN 2: Another brilliant long relief effort from Jonny Hoffman thrust Indiana Baseball into another Sunday rubber match following a 5-2 Hoosier win over Northwestern (17-32, 6-17 Big Ten) in game two. Six days after recording a pair of four-inning saves in the same day against Nebraska, Hoffman clocked in for a 4.1-inning shift on the bump to earn the win and improve to 5-1. Read more at IUHoosiers.com.

IOWA 2, MICHIGAN STATE 1: Iowa scored runs in the eighth and the ninth innings to come-from-behind and upend Michigan State, 2-1, Saturday afternoon at a soggy McLane Stadium.  The start of today?s game was delayed two and a half hours due to rain. Read more at Hawkeyesports.com.

NEBRASKA 8, MINNESOTA 7: The University of Minnesota baseball team erased a 7-1 deficit and tied the game, 7-7, only to fall, 8-7 against Nebraska, today in Lincoln, Neb. The Gophers fall to 28-24 on the season and 10-10 in Big Ten play. Read more at Gophersports,com.

SEATTLE 11, OHIO STATE 1: The Ohio State baseball team fell to Seattle, 11-1, Saturday afternoon at Nick Swisher Field at Bill Davis Stadium. With the loss, the Buckeyes fall to 29-22 on the season while the Redhawks improve to 22-23. Read more at OhioStateBuckeyes.com.