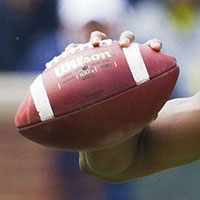 The Big Ten will be bolstered by the return of nine starting quarterbacks in 2012. The only schools breaking in new starters under center are Michigan State (Kirk Cousins gone), Northwestern (Dan Persa gone) and Wisconsin (Russell Wilson gone). Without a doubt here, Michigan?s Denard Robinson looks like the top quarterback in the league. Could he become the first Big Ten quarterback to win the Heisman since Ohio State?s Troy Smith turned the trick in 2006?

Let's fire up the debate. Following is my ranking of each Big Ten quarterback who is projected to start in 2012.

1. Denard Robinson, 6-0, 195, Sr., Michigan. ?Shoelace? exploded onto the scene as a sophomore in 2010, when he won Big Ten MVP honors as he emerged as one of the nation?s most dangerous weapons in running for 1,702 yards. No quarterback ever has rushed for more yards in a season. That same year, he also became the first quarterback to rush for over 1,500 yards and pass for over 2,500 in a season. Two years and a new coach later, Robinson remains a dynamic weapon that new coach Brady Hoke is trying to reign in as a runner and improve as a passer. So far, so good, as the Wolverines went 11-2 last season, but Robinson needs to trim those Big Ten-high 15 picks and continue to improve his accuracy and decision making.

2. James Vandenberg, 6-3, 212, Sr. Iowa. He showed us how good he could be back in 2009, when he nearly led the Hawkeyes to victory at Ohio State while subbing for an injured Ricky Stanzi. Vandenberg now enters his second season as a starter as arguably the top passer in the Big Ten (see 2011 Big Ten QB Ratings). He could be primed for a huge send off if Iowa can develop a rushing game to take pressure off Vandenberg-who in 2011 became the first native Iowan to start an opening game since 2001–as a passer.

3. Braxton Miller, 6-2, 210, So., Ohio State. He received a baptism by fire as a true freshman last season, taking over for an ineffective Joe Bauserman and flashing great potential. Miller is a dangerous dual-threat, running for 715 yard and completing 54.1 percent of his passes for 1,159 yards with 13 touchdowns and four interceptions for a Buckeye program that suffered its first losing season since 1988. Miller looked good in the spring running Urban Meyer?s spread scheme. This could be the start of something very special.

4. Danny O?Brien, 6-3, 215, Jr., Wisconsin. The Maryland transfer figures to step right in and claim the starting job, the second season in a row the Badgers will have been led by a quarterback transfer from the ACC (Russell Wilson, N.C. State). O?Brien earned ACC Rookie of the Year honors in 2010 but lost his job last year with the arrival of a new coaching staff. O?Brien, who threw for 4,086 yards, 29 touchdowns and 18 interceptions at Maryland, is an athletic signal-caller who is equally adept with his arm and legs for what could be the top offense in the Big Ten.

5. Taylor Martinez, 6-1, 200, Jr., Nebraska. He worked on improving his footwork in the offseason. Not to improve as a runner. Martinez already is one of the best running quarterbacks in America. Rather, Martinez is looking to become a better passer (57.4 completion percentage) with improved balance. He also figures to benefit from playing in the same offense in consecutive seasons for the first time since ? ever. Martinez played at three different high schools, then worked in Shawn Watson?s offense in 2010 and Tim Beck?s in 2011.

6. Andrew Maxwell, 6-3, 212, Jr., Michigan State. He has waited three seasons for this day, redshirting in 2009 and backing up Kirk Cousins the last two seasons. All indications point to Maxwell being ready. He?s more athletic than Cousins and may have a better arm. But Maxwell, who has completed 29-of-51 passes for 294 yards with a touchdown, lacks the savvy and experience of Cousins. The good news: A strong line and running game will take pressure off Maxwell, who won?t have to carry a big load with his right arm as he and new receiving corps get acclimated.

7. Nathan Scheelhaase, 6-3, 195, Jr., Illinois. He became just the third redshirt freshman in school annals to start a season opener in 2010-and Scheelhaase hasn?t looked back. Yes, he?s has some inconsistencies, primarily as a passer, but Scheelhaase is improving and remains a deadly threat as a runner. And he showed a decent grasp of new coach Tim Beckman?s offense to emerge from spring drills as the starter.

8. Caleb TerBush, 6-5, 225, Sr., Purdue. Rob Henry was primed to start in 2011 until injuring a knee in camp, and Robert Marve was slow to recover from a knee injury. Enter TerBush, who showed steady progress all season. TerBush hit 61.7 percent of his passes for 1,905 yards with 13 touchdowns and six interceptions in leading the Boilermakers to their first bowl since 2007. While TerBush is pegged to start, count on Marve-who was granted a sixth year of eligibility–playing often. And Henry also will be involved in some way (Receiver? Running back? Quarterback?). Are three quarterbacks too many?

9. MarQueis Gray, 6-4, 240, Sr., Minnesota. His career can best be described as ?up and down.? It?s understandable, as he split time between quarterback and receiver his first two seasons on campus before focusing on being a signal-caller this past season. Gray began to show glimpses in 2011, almost single-handedly carrying the Golden Gophers to victories over Iowa and Illinois. He set a school single-season rushing mark for a quarterback last year with 966, but he needs to pass better (50.7 completion percentage in 2011) to take the next step.

10. Matt McGloin, 6-1, 199, Sr., Penn State. Bill O?Brien isn?t saying who will be the starter, but signs seem to point to McGloin being the guy. He started five of the last six games in 2010 and was the primary quarterback last season until Rob Bolden proved to be ineffective, assuming command and then missing the bowl game after suffering a concussion in a fight with a teammate in the locker room. McGloin-the first walk-on quarterback ever to start for Joe Paterno–is a decent game-manager, but he?s prone to throwing costly interceptions (22 TDs-14 INTs) and tends to struggle in big games.

11. Kain Colter, 6-0, 190, Jr., Northwestern. He showed his talent in taking over for an injured Dan Persa and leading the Wildcats to a win at Nebraska last season. Now, the No. 1 job belongs to Colter, who also played wideout the previous two seasons. How versatile was Colter in 2011? He fell just 34 yards short of finishing with 500 or more yards passing (673), rushing (654) and receiving (466). He will focus on quarterbacking, needing to improve his pocket presence and accuracy.

12. Tre Roberson, 6-0, 183, So., Indiana. Kevin Wilson wouldn?t anoint a starter exiting spring drills, but Roberson figures to have a leg up on JC transfer Cameron Coffman, who took part in spring drills. Roberson became the first true freshman ever to start at quarterback at Indiana, getting the nod in five games and playing in nine last season and throwing for 937 yards. But he had just three touchdown tosses and six interceptions. Roberson is a deadly runner, but he must improve his passing-a top priority in Wilson?s offense this fall.