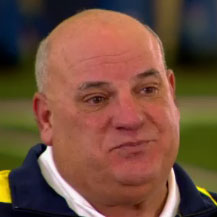 Michigan was one of the nation?s most surprising teams last season under first-year coach Brady Hoke. The Wolverines finished 11-2, capping the remarkable season with a Sugar Bowl triumph over Virginia Tech. Some of the credit for Hoke?s remarkable debut has to go to offensive coordinator Al Borges.

This week I caught up with Borges  to ask him-among other things–about quarterback Denard Robinson, how Devin Gardner will be used and to compare the SEC and Big Ten. It' the latest in my series of one-on-one interviews, which have included Penn State's Bill O'Brien, Indiana's Kevin Wilson, and Michigan State's Mark Dantonio, among others.

The sage Borges, 56, has an impressive resume that includes offensive coordinator stints at Boise State, Oregon, UCLA, Cal, Indiana, Auburn and San Diego State. And his impact on Michigan?s attack has been profound.

Earlier this spring, BTN's Howard Griffith sat down with Borges in a must-see film session. Now here's what Borges had to say to me this week.

Q: Were you pleased with the development of quarterback Denard Robinson this spring?
A: I think he has come a long way. I want to see him carry some of the headway he made this spring into the fall. In the spring, he eliminated a lot of the throwing of the ball off his back foot into the middle of the secondary. He gets in trouble when he tries to make a play when it isn?t there to be made. But a lot of that went away in the spring. But we?ll have to see if he maintains that under pressure when it counts. But as far as understanding the offense, where to go with the ball, the decision-making process, he has taken a quantum leap. He knows what we want now.

Q: How difficult was it for him to adapt to your passing scheme?
A: I don?t know how many people knew the drastic disparity in the style of passing between what he was running before to what we are asking him to run. It was a blank slate. We took some hits literally and figuratively adjusting. He dealt with them well. He threw too many interceptions (Big Ten-high 15). He?ll be the first to tell you. But he made enough plays. His improvement from Game One to Game 13 was drastic. He wasn?t doing as many indiscriminate things at the end that he was in the beginning.

No. 2, I also wanted to keep him healthy. That kinda went hand in hand with No. 1, so he could play and practice the duration of the season and get out of bed on Sundays. The biggest thing that happened for Denard was (running back) Fitzgerald Toussaint. When Fitz manifested himself around the midpoint of last season, a lot of pressure came off Denard?s shoulders. Not all of it. But now he didn?t feel obligated to run for 150 yards a game. We were trying to cut his carries to 15-17 a game.

We didn?t want to make him a pro-style quarterback; we knew what his skill set was. Our intent was to take some carries away and get someone else involved so he could be more of a quarterback. Because, really, he had been playing single-wing tailback. Now, he is more involved in every phase of the game. I took some hits-?Why wasn?t he running??–but it didn?t bother me. I knew once we found that running back, it all would fall into place.

Q: Will your offense look any differently or have any new wrinkles in 2012?
A: Nothing all that significant. I?m trying to not change that much. I don?t want to reinvent the wheel and come up with new schemes that he has to learn. He has a good understanding of what we do. That said, from week to week, we change some things formation wise and add a play or two here or there. But I don?t want any paralysis by analysis.

Q: What are your plans for backup quarterback Devin Gardner? Will he play some receiver?
A: We will use him a lot like we did last year, but we are gonna try to expand his role. He?s an incredible athlete. He has a special skill set. We used him last year in our deuce package when we used two quarterbacks. And will continue from game to game to still tap that but expand it a bit because we were productive for the most part in that package. We had our bad plays but we averaged over eight yards from that formation. He is a kid who has to be in the game.

Q: Roy Roundtree is a proven receiver. Who else will catch passes?
A: Jerald Robinson had a good spring. He?s a bigger guy (6-1, 195) that fits our style well. I think you?ll see him make an impact. Inside, Jeremy Jackson and Drew Dileo are really solid guys, catching the ball in traffic and doing the dirty work in the running game. They are very solid players. And we will see what some of the freshmen do. We have a couple fast kids coming in. They could have small roles until they learn more. We have talent at receiver but aren?t deep, which is disconcerting.

Q: You were offensive coordinator at Indiana from 2002-03. How has the Big Ten changed since your return to the conference at Michigan in 2011?
A: Not a lot. There are more spread teams. Still, the nucleus of the conference is physical in nature-more than probably any league. The SEC is close. In terms of big, strapping linemen, down-hill running-it was like that before, but you have a few more spread teams. Who is winning? The teams in the Big Ten title game were pro-style, down-hill running teams that played good defense, right? That?s what the Big Ten is. The first thing I think about when I think of the Big Ten is ?physical.? Always has been no matter where I have been. Now, to be better as a league, we have to enhance our speed, which we are in the process of doing. We can get linemen, but we need to enhance our speed if we are going to compete at the highest level.

Q: The Big Ten always is compared to the SEC, which has won the past six national titles. You were offensive coordinator at Auburn from 2004-07. Having coached in each league, do you think the SEC is that much better than the Big Ten?
A: No, I don?t think it is at all. But they have more fast players-on defense in particular but also on offense. That?s the difference. Having coached in the Pac-10, SEC and Big Ten, I can make a rational comparison. I see no discernible difference in coaching. They all do a good job. If we had Big Ten coaches in the SEC, I think they?d win, too. The biggest difference is the SEC has done a nice job getting speed. You can get those kind of kids here and at other schools. I think this is cyclical. We could see a Big Ten team win several national titles in row.

Q: Michigan opens the season vs. defending national championship in Arlington, Texas. You have stared down, prepared for and competed against the Crimson Tide. What can the Wolverines expect from Bama?
A: I have been involved in five games vs. Alabama. The thing about them, they will be fast. And always have been a good defensive team. (Nick) Saban has perpetuated that. They will play defense, no ifs, ands or buts about it. They have gotten better on offense. They are still a bit old-school. They want to run and efficiently pass it. They will play a disciplined style and have an emotional fan base. They just won the national title and I think they feel like they are getting back to those Bear Bryant days. They are a confident bunch and should be.

Our kids will play hard and with resolve. Always have and will. A lot of pride and accountability here. They put on that winged helmet, they are serious about it. We try to send that message daily. We won?t be intimidated by the environment, but it definitely will be challenging.