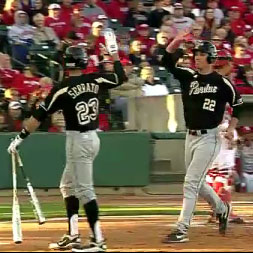 The Big Ten Baseball Tournament right around the corner, which means the NCAA baseball tourney isn't far away either. A number of sites are rolling out their tourney projections, including PerfectGame.org. Writer Kendall Roger has Purdue winning the Big Ten's automatic bid as the No. 1 seed in the Gary Regional, one of sixteen regional brackets in the 64-team tournament. By the way, we featured Purdue's baseball team earlier this season so you can get to know the squad by watching the video in this post.

To review: The winner of the Big Ten tournament gets the conference's standing bid. Any other team to make it will need to earn an at-large bid, just as with men's basketball  As for tourney projection, Jeremy Mills at ESPN.com has a similar projection for Purdue at their College Baseball Blog, and Mills also drops Michigan State into the Lexington Regional as an at-large bid, too.

Like Mills and Rogers, BaseballAmerica.com has Purdue safely in. But their blogger lays out a scenario here with Michigan State, Ohio State, and Illinois on the wrong side of the bubble. Michigan State has the stronger RPI of the three but right now they're out because they don't currently lead their league (see latest standings at BigTen.org). Fitt writes, "The Buckeyes and Illini have RPIs in the 60s but aren't serious at-large contenders given their places in the Big Ten standings."

Want to track national RPI? NCAA.com posts here it. Use that same page to find the latest NCBWA, Collegiate Baseball, Baseball America, and USA Today Coaches rankings, too. And you can brush up on your NCAA championship knowledge by looking at this comprehensive list of every champ and runner-up, too.