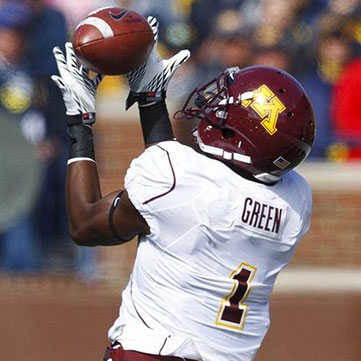 Jerry Kill enters his second year as Minnesota's head football coach and the challenges of the 2012 season are clear. What is one must-win game? When could the Gophers possibly pull off an upset?  What could be the bumpiest stretch for Kill and Company? I lay it out here in my latest team-specific schedule analysis.

Have a look at my previous posts – we've now done Illinois through Minnesota alphabetically. The rest come out in the coming days. And tell me what you think about the Gophers' schedule in the comments section, or come tell me on Twitter and Facebook.

Toughest non-conference game: A visit from Syracuse on Sept. 22 will be a good litmus test for Jerry Kill?s second edition of the Golden Gophers. Yes, the Orange went only 5-7 (1-6 Big East) last season, but Syracuse appears to be a program on the rise under Doug Marrone. Minnesota may be aiming for a 4-0 start with a victory here. Really. And that would be huge for the Gophers? bowl hopes.

Toughest Big Ten game: Minnesota will resume the longest rivalry in college football when it travels to Wisconsin on Oct. 20 to battle for Paul Bunyan?s Axe. But this hasn?t been a pleasant experience for the Gophers. The Badgers have won eight in a row and 15 of the last 17 meetings-and they may be the best team in the Big Ten again.

Who they don?t play: Indiana, Ohio State, Penn State. Not playing the Buckeyes always is a good thing. But, Minnesota may have had a good chance to topple the Hoosiers and Nittany Lions.

Easiest game: There usually aren?t many for a team that goes 3-9, as Minnesota did in 2011. But a visit by FCS New Hampshire on Sept. 8 is the closest thing to a lay-up for the Golden Gophers, who play one of the weaker non-conference schedules in the Big Ten. New Hampshire went 8-4 last season playing in the FCS Colonial Athletic Association.

Rugged stretch: The month of November shapes up as daunting. It starts with a visit from Michigan (Nov. 3), continues with back-to-back road games at Illinois (Nov. 10) and at Nebraska (Nov. 17) and concludes with a visit from Michigan State (Nov. 24). All together now: Whew! The Gophers? postseason hopes may be riding on their ability to win at least one-maybe two–of the those games.

Best chance to be upset: Minnesota needs to be cautious when Syracuse visits on Sept. 22. The Orange are a program on the rise under Doug Marrone. A win over Syracuse could push Minnesota?s record to 4-0, giving the Gophers lots of mojo entering Big Ten play the next week at Iowa, a team Minnesota has beaten two years in succession.

Best chance to pull an upset: Michigan will be coming off a game at Nebraska when it rolls into Minnesota on Nov. 3 for the battle of the Little Brown Jug. But know this: The Gophers have beaten the Wolverines just one time (2005) since 1986. Still, you never know.

Must win: The losing to Northwestern has to stop. And it must begin when the Wildcats visit Minnesota on Oct. 13. Northwestern has won four of the last five meetings. To climb the Legends Division food chain, the Golden Gophers need to win this game in hopes of reaching a bowl for the first time since 2009. It?s the proverbial next step for the program under Kill.

Bye week: Oct. 6. This comes at a nice time, as Minnesota will have played five games. By then, the staff should know what type of team it has as the Gophers prepare to dig deep into conference playing coming off their Big Ten opener at Iowa on Sept. 29 and gearing up for Northwestern?s visit on Oct. 13.