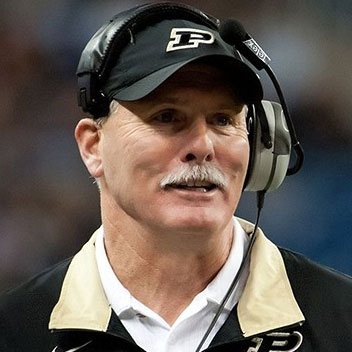 Danny Hope admits that this is his best team at Purdue. He enters his fourth season in West Lafayette with a 16-21 record (10-14 Big Ten) after first arriving from Eastern Kentucky as Purdue's head-coach-in-waiting in 2008 under Joe Tiller. Hope assumed command in 2009 and guided Purdue to its first bowl since 2007 last season, when the Boilers downed Western Michigan in the Little Caesar?s Bowl.

Now, Hope is aiming for more. His tenure has been marked by knee injuries to key players. Running back Ralph Bolden and quarterbacks Robert Marve and Rob Henry have incurred knee injuries that at one point or another have proved to challenge and compromise the team. The good news: Purdue emerged from the spring without any key injuries.

And-who knows?-it may be a dark horse in the Leaders Division if the offense becomes more consistent after ranking seventh in the league in scoring last season and the defense tightens after ranking ninth in the Big Ten.

I caught up with Hope at the conclusion of spring drills to get his thoughts on his fourth Purdue team in the latest of my series of spring football Q&A sessions.

Q: Did Caleb TerBush come out of spring drills as the No. 1 quarterback?
A: Yes he did. He finished the season No. 1 after being thrust into the starting role right before the opener last year. He progressed as the season went along. He always managed games well but began to impact games more as the season went along and got more confidence. I don?t think he threw an interception in the last four and a half games. So, in spring ball, he was a confident, experienced and winning quarterback. He ended the year No. 1, entered spring No. 1 and left spring No. 1.

Q: Quarterback Rob Henry was the returning starter before he hurt a knee prior to the start of the 2011 season. How does he look?
A: Henry didn?t get many reps in the spring coming off a knee injury. We were cautious with him. He is a great player and athlete who we are excited about.

Q: Robert Marve is another quarterback with starting experience. He was granted a sixth year of eligibility. What do you expect from him?
A: For the first time, he got the quality reps he needed. He wasn?t recovered from a knee injury when last year started. He started slow and wasn?t ready. But the second half of the season, he was healthy and confident. He played well vs. Ohio State and we got a huge win there. Getting reps was huge for him. He?s an unbelievable talent, but he was behind in his development after sitting out a year to transfer and then getting hurt. But he got better and better as last year went along and really improved and then shined in the spring game. He threw well, looked fast and was confident. It was the best he looked since he has been here. We are strong at quarterback.

Q: Could this be your best team?
A: There is no question about that.

Q: The defensive staff has three new coaches, including new coordinator Tim Tisebar-the team?s third defensive coordinator in three years. How does the defense look?
A: I thought the new coaches did a good job installing the new plan. The players did a good job learning the system. The new scheme has a lot of options but a minimal amount of teaching. I like the potential we have from a schematic standpoint. I think the new scheme will be good for our team and I like what I saw execution wise in the spring. As little time as we had in the spring, I thought the players picked it up well. So I am excited about the scheme, fundamentals, teaching and progress in that area.

Q: Do you have the personnel to carry out the new defense, which could include some 3-4 looks?
A: We have a lot of good players back on defense. We have the potential to be very strong up front. It starts with (tackle) Kawann Short. His progress had been good. He has improved physically. We think he can be a first-round pick. When you have that type of force in the middle, it?s a great place to start. He is flanked by Bruce Gaston, who has gotten better and better. He is bigger and stronger. Brandon Taylor also has played a lot as a tackle–another big, strong guy inside.

Q: How good can end Ryan Russell be?
A: Ryan Russell is a guy who really could make a difference for us next year. He was very good as a freshman last year. He keeps getting better. He finished the spring playing as well as any end in the league. And we needed a big-time end to go with those tackles. Robert Maci and Jalani Phillips are other ends we like, too.

Q: And is it fair to say that your secondary could be good, too.
A: We are talented and deep there. It starts with (cornerback) Ricardo Allen. Normondo Harris and Josh Johnson are other good corners. They could be potential top players at their position in our league. Taylor Richards played some as a true freshman last year and has emerged as one of our top defensive backs. Max Charlot also is back. We struggled to manufacture a rush early last season and that hurt our secondary a bit. We have an awfully good secondary and front coming back.

Q: Is running back Ralph Bolden ready to go after suffering another knee injury?
A: We hope Ralph can rebound and recover and be a good player for us. He is optimistic about it and so are we, but he has a lot of work to do. Akeem Shavers is back. He was out second-leading rusher and was MVP of the bowl. He?s a strong, fast experienced back.

Q: What about the receiving corps?
A: We have some fast guys. Antavian Edison ** is fast. (Raheem) Mostert, who led the nation in kickoff returns, is back. Gary Bush is a class athlete who is back. O.J. Ross had an excellent spring and we expect him to have a good year. We have good quarterbacks and speed on the perimeter and potentially in the backfield. And tight end has gotten better. We have Gabe Holmes back, who is a great talent.

Q: How does the offensive line look?
A: We have made progress on the line. We potentially have three or four starters back, but two were out in the spring-Peters Drey and Justin Kitchens. We had new faces in there which helped us develop depth.

And we hired Duane Carlisle as director of sports performance (in the winter). He is developing our players. He has the most comprehensive and best sport performance program in the country. Our players believe in him and what he does to get them ready to play.

So, a lot of things the average fan wouldn?t be aware of (from a progress standpoint) have taken place. A sports performance director, director of player personnel, I like our staff, I really like our team.

Q: Will Purdue be back in a bowl this season?
A: That?s always the goal. We think we can have a winning season and qualify for postseason play, and we think we are ready to take a big step.

** – (Editor's note: Edison was arrested over the weekend in Florida and charged with carrying a concealed weapon)