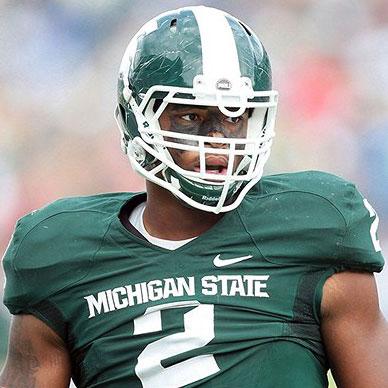 When it comes to fabulously famous tandems, there have been many over the years. TV's Captain Kirk and Spock. Literature and film's Sherlock Holmes and Dr. Watson. Google's Larry Page and Sergey Brin. You see where I'm going. Each individual helps make the duo's value greater than just the sum of their parts. What are the best tandems in the Big Ten? Glad you asked.

Here are my picks for top dynamic duos at each position – with a curve ball at one spot – heading into 2012. Agree or disagree? If you missed my earlier posts, I've been spending some of the offseason ranking other things in the Big Ten, too. And I heard from some of you on this one for sure.

OFFENSE
Quarterbacks: Michigan?s Denard Robinson, Sr. and Devin Gardner, Jr.
This is a dynamic quarterbacking duo that?s long on athletic ability. Both Robinson and Gardner-who may play some wideout–have the speed and footwork to make defenders miss and gain ample yards rushing. And each is making strides as a passer, making both that much more deadly. D-Rob is like two players in one. In 2010, Robinson set the NCAA single-season mark for rushing yards by a quarterback (1,702) and became the first player in NCAA annals to pass for 2,500 yards and rush for 1,500 in a season.

Running back: Wisconsin?s James White, Jr. and Montee Ball, Sr.
Many people forget that White out rushed Ball back in 2010, when White ran for 1,052 yards and 14 touchdowns and Ball had 996 yards rushing and 18 scores. Of course, Ball emerged last year en route to rushing for a national-best 1,923 yards with 33 touchdowns. White-the speedier of the two–ran for ?only? 713 yards in 2011. Add it all up, and the Badger duo has 5,075 yards rushing with 75 touchdowns on the ground.

Receivers: Iowa?s Kevonte Martin-Manley, So. and Keenan Davis, Sr.
There really isn?t an obvious Big Ten wideout tandem that stands out entering the season. This Hawkeye duo may be the best bet. Martin-Manley showed great promise as a freshman in 2011, when he grabbed 30 passes for 323 yards and three scores. Davis is a legit Biletnikoff Award candidate who made 50 catches for 713 yards and four touchdowns in 2011. Now, with Marvin McNutt gone, Davis looks like Iowa?s go-to guy. And both Davis and Martin-Manley-big targets with each over 6-foot and 200 pounds–will benefit from having James Vandenberg throwing to them in what looks like a more pass-friendly offense.

Tight ends: Nebraska?s Ben Cotton, Sr. and Kyler Reed, Sr.
Cotton made 14 catches for 189 yards, while Reed nabbed 15 catches 257 yards and a touchdown in 2011. Look for quarterback Taylor Martinez to lean on the duo when it?s third down or when the Cornhuskers are in the red zone. Good news for each: Coaches want to make the tight end a bigger part of the attack, much like what is happening in the NFL.

Tackles: Wisconsin?s Ricky Wagner, Sr. and Rob Havenstein, So.
The beat goes in Madison, as Wagner and Havenstein are the top bookend tackles. In fact, Bret Bielema thinks Wagner-a left tackle–is in line to be Wisconsin?s third Outland Trophy since 2006, when Joe Thomas won; Gabe Carimi took the honor in 2010. The mammoth Havenstein (6-8, 343) will take over on the right side with Josh Oglesby gone. This duo figures to pave the way for another huge year for running back Montee Ball, the Big Ten?s top Heisman candidate.

Guards: Ohio State?s Andrew Norwell, Jr. and Marcus Hall, Sr.
The Buckeye front is undergoing change with tackles Mike Adams and J.B. Shugarts gone, along with center Michael Brewster. But Ohio State looks good at guard. Norwell, the left guard, is the only projected starter up front who is back at his position. Hall looks ready to blossom after being a part-time starter in 2011.

DEFENSE
Ends: Michigan State?s Marcus Rush, So. and William Gholston, Jr.
Gholston may be the top end in the nation. He?s coming off a huge 2011, notching 16 tackles for loss and five sacks. Rush was a freshman sensation last year, totaling 12 tackles for loss and four sacks. If that?s not enough, the duo combined for 128 tackles last season for what was one of the top defenses in the nation last year.

Tackles: Purdue?s Kawann Short, Sr. and Bruce Gaston, Sr.
The team defensive numbers may not impress, but opponents and coaches know how formidable Short and Gaston are. Short leads the way. The high school basketball teammate of former Purdue great E?Twaun Moore, the 6-3, 310-pound Short is a tremendous athlete. He finished fourth in the Big Ten in tackles for loss (12.5) and sacks (six) in 2011. And-get this-he paced the Boilers with eight pass breakups. Gaston was a starter as a true freshman in 2010 and has only gotten better.

Linebackers: Wisconsin?s Mike Taylor, Sr. and Chris Borland, Jr. The duo was among the most active in the Big Ten last season. Taylor paced the Big Ten in tackles (10.7 pg). Borland ranked No. 4 (10.2). Taylor is stouter against the run, while Borland flies from sideline to sideline making plays for what should be a strong Wisconsin defense.

Cornerbacks: Michigan State?s Darqueze Dennard, Jr. and Johnny Adams, Sr. They are the best of a number of strong Big Ten cornerback duos, with Ohio State?s tandem of Travis Howard and Bradley Roby, Michigan?s duo of Blake Countess and J.T. Floyd, Purdue?s Ricardo Allen and Josh Johnson and Iowa?s twosome of B.J. Lowery and Micah Hyde also looking good. Still, I give an edge to the Spartan pair that is led by Adams, the top corner in the Big Ten who projects as a first-round draft choice. He also may see some action at receiver this fall. Is he a Heisman candidate? Hmmm.

Safeties: Ohio State?s Christian Bryant, Sr. and C.J. Barnett, Sr.
Bryant is a hard hitter who started nine games last season and notched 68 tackles with eight passes broken up. Barnett has started 15 games in a row and paced the Buckeyes with 75 tackles in 2011 while also picking off two passes and breaking up six. And coaches also can throw in senior Orhian Johnson, who has 15 starts. Combine these safeties with corners Travis Howard and Bradley Roby, and you can see why Ohio State probably has the top secondary in the Big Ten.

Kicker/Punter: Nebraska?s Brett Maher, Sr.
Maher is his own duo. He led the Big Ten in field goals last year, nailing 19-of-23 (.826). He also paced the conference with a 44.5-yard punting average. The team with the best actual ?tandem? is Michigan State, with sophomore punter Mike Sadler back after averaging 41.2 yards per boot in 2011 and senior kicker Dan Conroy returning after hitting 17-of-23 field-goal attempts (.739).