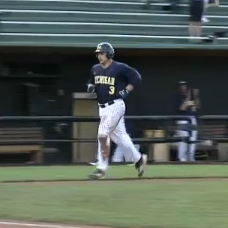 Game 1: MICHIGAN 8, IOWA 2 (10); Game 2: MICHIGAN VS, IOWA: The University of Iowa baseball team split a Saturday afternoon doubleheader against Michigan at Duane Banks Field. The Wolverines came from behind to win game one in 10 innings, 8-2. The Hawkeyes claimed the second contest of the doubleheader, and final game of the three-game set, 7-2. Read the full recap or both games at Hawkeyesports.com.

NEBRASKA 13, INDIANA 2: Behind a seven-strikeout performance from freshman Kyle Kubat and three home runs from the Husker offense, the Nebraska baseball team put an end to the Indiana Hoosiers? four-game winning streak with a 13-2 win. Chad Christensen, Kash Kalkowski and Josh Scheffert each had three hits and three RBI?s on the afternoon, as the Huskers outhit the Hoosiers, 16-5. Read the full recap at Huskers.com.

MICHIGAN STATE 6, ILLINOIS 5 (10): Junior third baseman Brandon Hohl tied the game with a two-run single in the fifth inning but Michigan State scored an unearned run in the 10th inning to take a 6-5 victory over the Illini and win the series at Illinois Field on Saturday. The loss is Illinois' third-straight defeat and drops the Illini to 25-21 overall, 8-9 in the Big Ten and into eighth place in the league standings. Illinois currently stands one game out of sixth place, which is the final spot in the Big Ten Tournament field. Read the full recap at FightingIllini.com.

Game 1: OHIO STATE 3, NORTHWESTERN 1; Game 2: OHIO STATE 7, NORTHWESTERN 1: Northwestern struggled to get its offense going in the second game of a doubleheader as Ohio State jumped out to an early lead en route to a 7-1 win Saturday evening at Bill Davis Stadium. The Buckeyes also won the first game, 3-1. Ohio State moves to 26-20 on the season, 10-10 in the Big Ten, while Northwestern falls to 16-28, 5-15 in conference play. Read the full recap at NUsports.com.

Game 1: UCLA 5, PURDUE 1; Game 2: UCLA 3, PURDUE 2: No. 11 Purdue baseball managed to score only three runs over 18 innings on the day, dropping both games of a doubleheader at No. 14 UCLA Saturday afternoon, 5-1 and 3-2. The Boilermakers (34-9) suffered their first series loss of the season and have now dropped three consecutive games for the first time since the 2011 spring break trip. Purdue was swept in a doubleheader for the second time this year, falling to 7-5 in twinbill action overall this year. Get more at Purduesports.com.