Which Football Playoff Idea Do You Prefer? 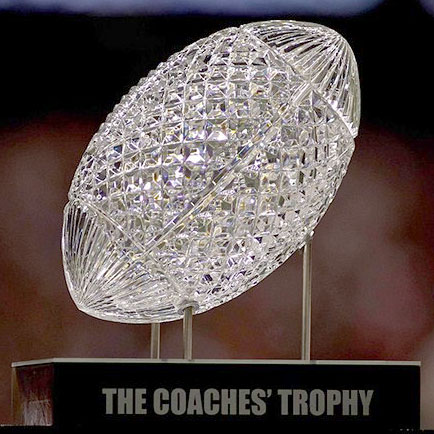 While America is falling in love with the possibility of a four-team playoff, the Nebraska president favors a plus-one. Really. In fact, University of Nebraska-Lincoln chancellor Harvey Perlman says a plus-one is the favored format among many leaders at Big Ten and Pac-12 schools.

Here?s another bucket of ice cold water over your noggin: If there was a four-team playoff, Perlman says he didn?t think decision makers would want the two semi-final games to be played on campuses of higher-seeded teams. Why? Perlman fears such a set up would diminish the bowls. I'm sounding off on this and other Big Ten football links that matter on this Friday. Dive on in.

News flash: The bowls already are diminished. It happened back in 1998, when the BCS was created and the college football head honchos told us: ?Look, here is a national title game. Those other bowls? What do they mean?" (Silence. Shoulder shrug.)

So, back to Perlman: How again would having two national semifinal games played on campuses diminish bowls any more than they already are?

Please, someone, enlighten me.

In other playoff news …: On the subject of playoffs, Big Ten commish Jim Delany still favors a four-team format. YES!!!!

But while Delany is pro playoff, he favors having conference champions make up the four teams in a playoff-as long as they rank among the Top 6 schools in the nation in whatever ranking system is used to determine playoff teams.
Bad idea.

This certainly would prevent a league from having multiple teams in the playoffs. Yes, we?re looking at you, SEC. But, who cares? To me and most rational thinking people, a playoff is about having the best teams-not trying to be inclusive.
Do you think America would have embraced a four-team playoff last year if it didn?t include Alabama and LSU?

In pro sports, divisions aren?t limited to having one team in the playoffs. If a division (or conference in the case of college football) happens to be strong, why penalize a team by not letting it in the playoffs while rewarding a team from a weaker conference with a playoff berth?

Does that make sense?

The more people talk about a playoff and kick around ideas, the less enthused I am becoming. Delany thinks a final decision on a playoff could come by June 20.

Rank it: Sports Illustrated has released its post-spring Top 25. Have a gander here. Wisconsin is No. 6; Michigan State is No. 10; Michigan is No. 13; Nebraska is No. 18.

I have to admit that I'm  a little surprised that the Spartans aren?t the highest ranked Big Ten team. If having what looks like the best defense in the Big Ten matters-and it surely does-then Michigan State should be the favorite. And while a new quarterback is being broken in along with an overhauled receiving corps, the Spartan offense has a good base with a strong line and deep collection of running backs.

See you in Pasadena, Spartans?

Just do it: We all know about those other 10 commandments. But here are Penn State coach Bill O?Brien?s 10 commandments for his starting quarterback. I?m guessing they are carved in pigskin. Maybe not.

I think every Nittany Lion fan can agree with all of these, especially No. 10: Win. And in a hurry.

What if Iowa coach Kirk Ferentzt tweeted? Yes, you are correct. It probably would be boring stuff. Forget I even provided this link. Still, it?s a fun read from Mike Hlas of the Cedar Rapids Gazette-one of my favs.

Up to speed? A look at some Penn State football true freshmen who could contribute in 2012: Keep an eye on tight… http://t.co/jTadqVJT

My take: While most recruiting gurus agree there was just one four-star recruit in Penn State?s 2012 class (WR Eugene Lewis), several true freshmen still could impact the Nittany Lions this fall. Along with Lewis, I think CB Jake Kiley and TE Jesse James have the best shots to play.

My take: Remember Greg Skrepenak? Guy was a great Michigan offensive lineman. I don?t like ?Where are they now?? updates like this.

My take: Not only is Michigan State on a roll on the field, but the mojo is working off the field, too. Is there a hotter program in the Big Ten? Of course not. Now, about that first Rose Bowl trip since the 1987 season ?