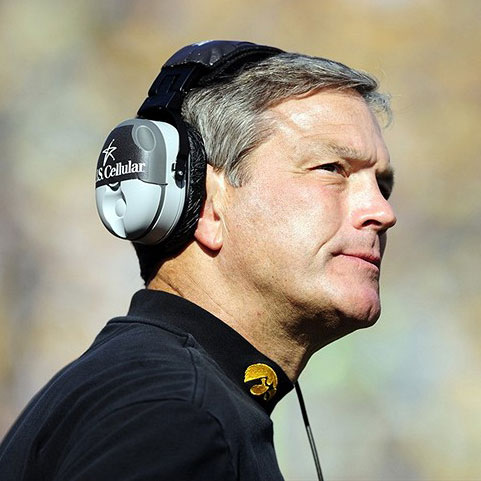 As we head into our first football-less weekend after three straight weekends of Spring Games coverage, I continue my Big Ten football team?s schedule analysis with a look at the Iowa Hawkeyes and their 2012 slate. If you missed my earlier ones, we covered Illinois here and Indiana over here. we're rolling them all out in the coming days right here.

Toughest non-conference game for Iowa? Toughest Big Ten game for the Hawkeyes? Where should Hawkeye fans be extra wary?  I give my opinion on these questions and more in this post so feel free to tell me what you think in the comments section, or come tell me on Twitter and Facebook. I always love talking Big Ten football.

Toughest non-conference game: The visit from Iowa State on Sept. 8 always is fun. Kirk Ferentz is just 6-7 against the Cyclones. The teams will battle for the newly designed Iowa Corn Cy-Hawk Trophy, a bauble that the Hawkeyes won three seasons in a row before the Cyclones claimed a wild 44-41 triumph last year. But know this: Iowa has won four in a row in Kinnick over Iowa State.

Toughest Big Ten game: The trip to Michigan State on Oct. 13 will be daunting. No doubt, Iowa will be helped by the fact it has a bye week before making this trip, and it could be 5-0. But this also will be the Hawkeyes? first true road game. The last two games in the series were played in Iowa City; the Hawkeyes won the last time they visited East Lansing in 2009.

Who they don?t play: Illinois; Ohio State; Wisconsin. This works out well for the Hawkeyes, as they miss the two best teams in the Leaders in the Buckeyes and Badgers. But, it?s too bad Wisconsin and Iowa won?t meet, as this was the only real rivalry that was a casualty of the Big Ten splitting into divisions.

Easiest game: Northern Iowa is an elite FCS program that relishes to play Iowa. The Hawkeyes needed to block two Panther field-goal attempts in the closing seconds in 2009 to avoid embarrassment. Despite all of that, the Hawkeyes should never-EVER-lose to the Panthers. Quick side note: Iowa is one of two Big Ten teams that isn?t playing a road non-conference game. (Ohio State is the other.) The Hawkeyes? game with Northern Illinois is in Chicago?s Soldier Field.

Rugged stretch: Iowa finishes with a tough 1-2 punch, playing at Michigan and then concluding the season vs. Nebraska. These could be huge Legends Division games.

Best chance to be upset: The Hawkeyes open Big Ten play with a Homecoming tilt vs. Minnesota on Sept. 29. Yes, the Golden Gophers went 3-9 last season, but they have beaten Iowa each of the last two years with both games being played in Minneapolis. Know this: The Gophers haven?t won in Iowa City since 1999.

Best chance to pull an upset: Iowa and Nebraska could be jostling for the division title when they meet on the Friday after Thanksgiving on Nov. 23 in the season finale. The Huskers won last year, 20-7.

Must win: If the Hawkeyes have dreams of contending for the Legends title, they must beat Penn State when the Nittany Lions visit on Oct. 20. Iowa has won eight of the last 10 meetings with Penn State. Getting this win is even more vital for Iowa when you consider they play their next two on the road (Northwestern and Indiana).