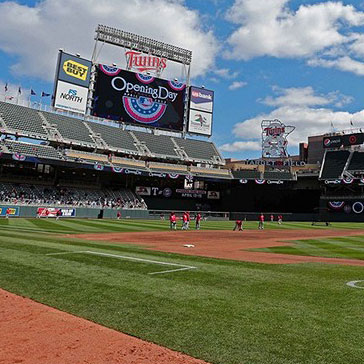 Minnesota and Penn State will be the latest Big Ten baseball teams to play in a MLB stadium when the Gophers and Nittany Lions open a three-game series in Minneapolis. They'll play indoors at the Metrodome on Friday and Sunday but Saturday's game airs at 3 p.m. ET on BTN live from Target Field, home of the Minnesota Twins.Earlier this season, Illinois faced Missouri at Busch Stadium in St. Louis (see video in this post).

GopherSports.com tells us this is the third straight year Minnesota has played at Target Field. The Gophers played in the first-ever game at Target Field in 2010 in front of 36,056 fans, the second-largest crowd to ever witness a collegiate baseball game. Read more at GopherSports,.com and tune in for the BTN's "B1G Diamond Report" on Sunday at 5 p.m. ET as we recap the entire weekend of Big Ten baseball and softball action.

As for other Big Ten teams playing in Major League Baseball stadiums, later this month Michigan State faces Central Michigan at Comerica Park in Detroit on May 15, also on BTN.

Three of tonight's games are available live online via our subscription package on the Big Ten Digital Network: They are Illinois at Michigan State, Michigan at Iowa, and Minnesota at Penn State. Get more details here.Tonight;s game between Northwestern and Ohio State is set to air on BTN TV airs at 7 p.m. ET, and OhioStateBuckeyes.com has more details here.

Also, our colleagues at BigTen.org have the full slate of weekend action over on their Big Ten baseball blog, and BTN.com will post selected video highlights all weekend. Watch previous highlights right now.