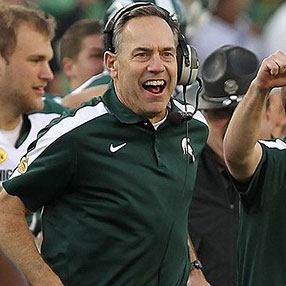 Michigan State is one of the hottest programs in the Big Ten-if not the nation. And the Spartans can thank Mark Dantonio. Since arriving from Cincinnati to assume command in 2007, Dantonio has forged a 44-22 record in six seasons, including a 27-13 mark in the Big Ten. And each season, Michigan State has gone to a bowl, highlighted by a win over Georgia in the Outback Bowl after last season. Dantonio also beat rival Michigan for a fourth consecutive season in 2011, forever endearing him to Spartan fans.

I caught up with the Spartan boss a few days after Michigan State capped its spring drills to get his impressions on the team and other topics in the latest in my series of one-on-one interviews with Big Ten names.

The Michigan State program appears to be peaking over the past two seasons with a combined 22 victories. Dantonio, 56, led the Spartans to a share of the 2010 Big Ten title-the school?s first since 1990–as well as a trip to the league title game last season after capturing the Legends Division crown. But a trip to the Rose Bowl continues to elude Dantonio and the Spartans, who last were in Pasadena after the 1987 season.

But that may all change in 2012, as Dantonio may have his best team yet when it opens vs. Boise State in East Lansing on August 31.

Q: Could this be your best offensive line since you have been in East Lansing?
A: I think it has the ability to be. We have more experience coming back, top to bottom. This line won 11 games last year, and a couple of the guys are still playing from the year previous or were at least in the two deep. So, I think it has great possibilities. We have good running backs. But we have to be able to throw the ball to keep people honest, and things could happen.

Q: Who are you looking at to step up at receiver?
A: He didn?t play in the spring game, but Tony Lippett is a guy with big play ability who was out with an ankle injury for about four or five practices. Keith Mumphrey I think had an outstanding spring. He played a little on Saturday. Bennie Fowler was on the sideline all last year but had a good 2010 season when he was our fourth or fifth guy. He has to return to being normal. Those would be the three guys.

DeAnthony Arnett is a guy, but we have to get him eligible. And we have some outstanding freshmen coming in. I think A.J. Sims is a guy who has done some good things this spring as a redshirt freshman. There are some other guys who could play into this, but I would say those are our top five coming out of spring. You never know how Kyle Kerrick will come back because he?s a freshman.

Q: Even without safety Trenton Robinson and Jerel Worthy, the defense could be one of your best, right?
A: The defense could be good as a result of eight, nine players coming back with experience and they only will get better. They have another year in the weight room, so they will get bigger, stronger, faster as well. And our defensive staff will be together for what is our ninth straight year. I think those are the things that you look at. We have game experience and we have had success, the confidence level will be there. But it depends on how every game goes. Everyone matches up differently. You have to play every game.

Q: What?s the biggest thing that has change about the program since you took for the 2007 season?
A: I would imagine internal and external expectations. When we first got here, we were trying to do some things that hadn?t been done in a while. And we have been able to accomplish a lot of those things. We haven?t been to the Rose Bowl yet, but we have won a lot of games. We are one of seven teams to have won 11-plus games in each of the last two years. That?s a positive and something to build on. Expectations are higher. Now, we sit and wonder: What can we become? I think we always are trying to reach higher and look to new horizons. That?s how we are gonna approach it here, but we have to understand that everyone is working it. I said on the first day of spring that we can?t be complacent and settle for what we did last year. We have to continue to push forward.

Q: Are you obsessed with trying to get to the Rose Bowl?
A: Am I obsessed? No. I?m obsessed with doing the very best we can do. I?m obsessed with whatever we can do, that we do it and try to overachieve. But that?s goal, and always has been the goal here. And that?s the way it should. And that should be the goal of every program in every conference to get to their ultimate championship game or format; for us, it?s the Rose Bowl. I just try to keep that picture in front of us. It?s something we strive for and hope to accomplish, and something could happen beyond that. Until we get to that (Rose Bowl), you can?t move beyond.

Q: How do you explain your mastery of Michigan the last four seasons?
A: Guys making plays. Players make plays, we get ready to play, but guys make plays. In the end, all the hype and all the talk, it sorta goes away once the game starts. You start to play the game and somehow you find a way to win. They certainly are competitive games. There is no question about that. We have been able to succeed, and we will try to continue to build on that and have confidence with that. But we have great respect for them. But it?s a rivalry game, so things get twisted and turned a little bit, too.

Q: What?s good about playing a team like Boise State coming out of the gate?
A: I think you get national exposure because Boise is such a well-known team coming in and have played BCS games the first game I think the last three years (Oregon; Virginia Tech; Georgia). There is Friday night exposure, national TV, you have the opportunity to play against a very good football team that is well coached. And it goes to figure the tougher teams you play in your out-of-conference schedule, you would hope that prepares you for your conference schedule. But obviously, you need to have success and come out of the gate fast. It?s going to give us great experience for our new quarterback and some of our younger players. It?s gonna be a prime-time type of game.

Q: How big was that win over Georgia in the Outback Bowl last year?
A: A huge win. We have been able to enjoy that until we get to August. That gives us a great deal of confidence that we can play at that level. And it gives us an understanding that we can win a bowl game. Whether you win your last game and don?t go to a bowl, or when you win your bowl game, I think it propels you into the next season.

But things never really stop. You never stop and say: ?OK, we are done here. Let?s take a month off.? It just doesn?t happen like that. You go on to the next thing. But you do have a feeling that ultimately the season was a success and that we finished in the Top 10 and there are some good things to point to and those are things we can build on as we climb the ladder.

Q: Do you think Michigan State gets enough national respect?
A: That?s not my job. My job is to win football games. We let everyone write about it. I think people are starting to take notice a little bit more.

Q: How is your health?
A: My health is great. Very, very good. I?ve always felt I have good balance (in my life). I take time away. But you can?t be away from this job and not think about it. But I get time off and I am in great health. I look forward to coaching for a long time.