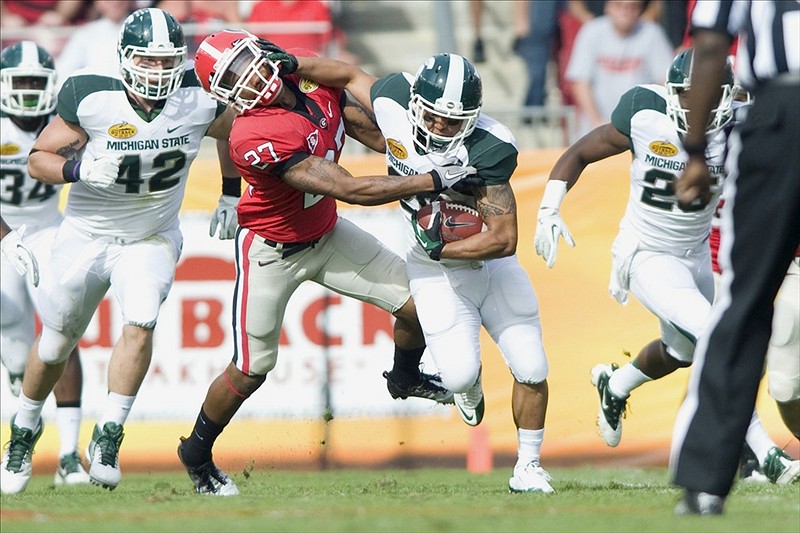 A Big Ten-SEC bowl game? In St. Louis? Maybe, according to this story in STLToday.com. Long story short: This is a LONG shot. A big long shot, as a lot of hurdles would have to be cleared for this to be a reality. But I love any concept that has the nation?s two best leagues meeting.

We already have that guarantee in three bowl games: Capital One; Outback; Gator. Would a fourth SEC-Big Ten bowl clash be overkill? Perhaps. I have a better idea in this post as I look at that story and more Big Ten football news fit to link to on a glorious Thursday (pssst, I break down links like this in my Daily Links).

So instead of that St. Louis game, I propose that the Big Ten and SEC meet in a season-opening game, much like the annual Chick fil-A game in Atlanta that typically pits an SEC team against an ACC squad. That game has become one of the most anticipated matchups of the season, featuring recent matchups like Alabama-Virginia Tech and North Carolina-LSU.

And instead of St. Louis, let?s have this preseason Big Ten-SEC game in, say, Indianapolis, where the Big Ten ends its season with its league title game. The idea of a "preseason? meeting filled with hype and anticipation is much better than the concept of having, say, two 7-5 Big Ten and SEC teams meet in a meaningless bowl anyway.

Playoff talk: The discussion continues as to how the four teams will be selected to play in a proposed playoff.

Big Ten commish Jim Delany said yesterday that one model being considered would be a conference champs only format-if the league champs ranked among the top six teams in the nation. If four league champs didn?t meet those criteria, then spots would be filled by the highest-ranked teams that didn?t win league titles or by an independent.

So, I?m guessing under such a formula, Alabama wouldn?t have been in a playoff last year because it didn?t win the SEC. Hogwash.

Look: Just take the top four teams in whatever ranking system is adopted.

What does being a conference champ have to do with anything? Don?t wild-card teams win championships in pro sports?
America wants to see the best compete in a playoff. We have come this far. Don?t screw it up.

Payout drops: Non-conference opponents who play at Iowa will leave with lighter pockets in 2012.

Iowa?s payout to foes will drop by $175,000 from last season. Hey, times are tough all over, people. Directional U and East Timbuktu State have to understand.

When Central Michigan visits, it will be paid $875,000-the most of any Iowa non-league opponent who visits this fall. Last year, the Hawkeyes paid Louisiana-Monroe $1.05 million, the most Iowa ever paid a non-conference foe.

Compare & contrast: Look, I understand coaches love and support their players, but in this story from the Detroit Free Press is Michigan State coach Mark Dantonio over-hyping running back Le?Veon Bell by comparing him to former Ohio State legend Keith Byars?

For you young folks out there, Byars was an absolute mega stud back in 1984, when he finished second in Heisman voting to some guy named Doug Flutie. That year, Byars ran for 1,764 yards and 22 touchdowns.

Bell? The junior finished eighth in the Big Ten last season with 948 yards rushing. Yes, Bell is good, but he likely won?t even be the top running back in the Big Ten this fall. That honor figures to go to Wisconsin?s Montee Ball. And, is Bell better than Nebraska?s Rex Burkhead? Michigan?s Fitz Toussaint? Penn State?s Silas Redd?

Hands on: No doubt, Iowa will miss Marvin McNutt, who left Iowa City as the school?s best wideout ever. But the Hawkeyes still have the makings of a good corps of receivers. Keenan Davis figures to be a top target. But don?t forget about Kevonte Martin-Manley, as this story in the Cedar Rapids Gazette points out.

As a redshirt freshman last season, he was the Hawkeyes? No. 3 receiver, grabbing 30 passes for 323 yards and three scores-the best performance by a freshman wideout since Derrell Johnson-Kouliano had 38 receptions in 2007 and James Cleveland had 36 the same season. Look for Martin-Manley?s numbers to jump in the offense of new coordinator Greg Davis, giving Iowa needed playmakers on the edge for an offense that will need to develop a ground game if it wants to compete in the tough Legends Division.

The question remains: Penn State coach Bill O?Brien says he knows who his quarterback will be ? but he isn?t saying. Watch for yourself at PennLive.com. C?mon. It?s Matt McGloin. Just say it.

Random note, at last night's #psucaravan QnA, Bill O'Brien was asked if the wildcat would be part of the new offense. The coach's answer: no

My take:  Look, O?Brien comes from the NFL. The Wildcat came and went like a bad pair of bellbottoms in that league. It?s a gimmick, and BOB doesn?t believe in gimmicks as a Bill Belichick disciple.

#Badgers football team didn't release depth chart this spring, so I take a stab at it. Story will be in Thursday paper, online late tonight.

My take: Meyer, Bielema, Dantonio, Hoke and Ferentz are top five. I have no issues with any of that. The caboose? Kevin Wilson. But, honestly, has Bill O?Brien (No. 8) done more than Wilson in his career? I don?t think so.