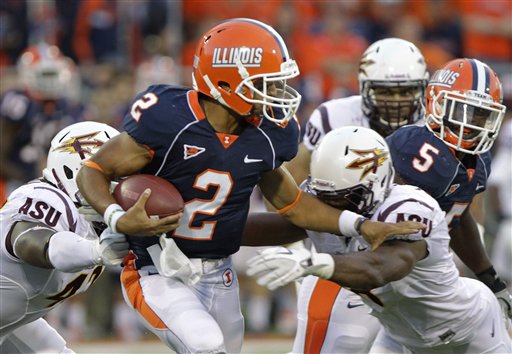 In the coming weeks, I will take a close look at each Big Ten football team's schedule, offering insight and analysis on what is ahead for each school. Up first: Illinois.

The Illini, of course, enter the first year of the Tim Beckman regime. A season ago, Illinois started 6-0 and entertained early dreams of playing in the Rose Bowl. Six games later, the Illini were 6-6. It was a rough finish–so rough it cost Ron Zook his job. See my Illinois schedule analysis in this post.

Toughest non-conference game: Sept. 8, at Arizona State. The Sun Devils are a quality Pac-12 foe that lost 17-14 at Illinois last year but has a new coach in Todd Graham.

Toughest Big Ten home game: Sept. 29, Penn State. Honestly, the home schedule isn?t too daunting. In fact, it isn?t crazy to think Illinois could go 7-0 at home. Really. How good will the Nittany Lions be as they transition to a new coach?

Toughest Big Ten road game: Take your pick of at Wisconsin (Oct. 6); at Michigan (Oct. 13); at Ohio State (Nov. 3). It will be tough for Illinois to win any of these games.

Who they don?t play: Iowa; Michigan State; Nebraska. The Illini catch a break here, not having to play perhaps the best team in the Big Ten in Michigan State. And the Huskers and Hawkeyes look like contenders in the Legends Division. I?m sure Illinois likes having cross-division games with Minnesota and Northwestern.

Easiest game: Sept. 15, Charleston Southern. The Buccaneers are a FCS school-and an odd choice for an opponent. They went 0-11 last season playing in the Big South. This may be a chance to clear the bench.

Rugged stretch: From Oct. 6-Nov. 3, the Illini play three of four on the road. And they all are killer trips-Wisconsin, Michigan, Ohio State. Illinois gets a week off after playing at Michigan and then comes home to play Indiana. Whew! Anything better than a 1-3 mark over this stretch will be a monumental achievement.

Best chance to be upset: Illinois needs to brace for Purdue?s visit on Nov. 17. This could be Danny Hope?s best Boilermaker team. When this game takes place, each team may be fighting for its bowl life. And maybe more in Illinois? case, as it has a chance to go 4-1 in its final five games and perhaps-PERHAPS-make a run at the Leaders title.

Best chance to pull an upset: Oct. 6, at Wisconsin. Illinois may be catching the Badgers at the right time. Before the Illini visit Madison, Wisconsin plays at Nebraska, which wants to exact revenge after getting hammered by the Badgers last year. Will Wisconsin ?get up? for Illinois? And on Oct. 13, the Illini could catch Michigan looking ahead to a visit from Michigan State.

Must win: Illinois needs to win at Evanston on Nov. 24 in the season finale. The Fighting Illini have won the last two meetings in this battle for the Land of Lincoln Trophy. And it must keep its foot on the neck of the Wildcats, who won six of seven over the Illini before the tables turned in 2010-11. But know this: Illinois hasn?t won in Evanston since 2002.