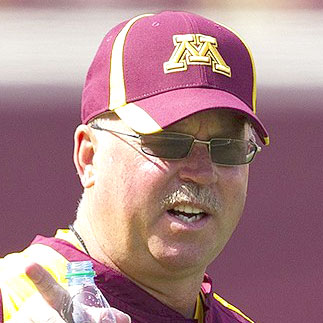 Now, Minnesota is his latest project. And, given his history, the 50-year-old Kill figures to make the Gophers a winner. I caught up with Kill to get his thoughts on the Minnesota program as it heads into the offseason.

Kill debuted with a 3-9 mark last season, but Minnesota finished on an up note with a 27-7 win over Illinois. And the team carried that momentum into spring drills, where Kill said the team looked markedly better than it did during his first run through spring practice last year.

Next stop: a bowl game, where Minnesota hasn?t been since going to back-to-back Insight Bowls in 2008-09, both losses to Kansas and then Iowa State under Tim Brewster. Only Indiana has a longer bowl dry spell among Big Ten teams, as the Hoosiers last went bowling in 2007.

The Gophers? Rose Bowl drought is the longest in the Big Ten, as Minnesota hasn?t been to Pasadena since going after the 1960 and 1961 seasons. But Kill wants to take things one step at a time.

And the offense also has work to do, developing the line and finding some pass catchers being among the top priorities.

Q: What pleased you about spring ball?
A: There is no comparison to where we were last year to where we are now. We have gotten better. Our kids have gotten better in the offseason. I think we run a bit better. And there is continuity in our staff being here a year, and we haven?t had a lot of that in the program. I just think our kids know what to expect. I think we got better in every phase and every position this spring.

Q: Can the defense be better?
A:In the secondary, we have about 12 kids we have recruited and some kids come in at semester. We certainly improved our athleticism and speed in secondary. We moved Derrick Wells from corner to safety, and he has put on about 20 pounds since his freshman year. I felt the group improved and feel good about it going into the season. It?s a young group and I think we developed some depth.

The pass rush, are we ready to rush the passer with just four guys? It?s hard to do that. I think we are getting better up front. We redshirted (end Thieren) Cockran who will be a redshirt freshman. He?s about 6-6, 235 and runs well. I think he had a nice spring. (End) Michael Amaefula is developed more. Those kids will be better and we will have to bring some pressure off the edge with a fifth person somewhere along the line.

Q: Are you pleased with where quarterback MarQueis Gray is at?
A: He left off last season on a good note in that win over Illinois and continued to get better. We can?t go backward. He had a very good spring. I thought he did a much better job throwing the ball. We have to find some guys who can go get it. That?s something we have to work on in the summer. MarQueis has really improved his game, and I?m looking forward to watching him in his senior year.

Q: Is this team ready to go to a bowl?
A: You can?t answer those kind of questions. To me, there is no way to have a crystal ball to predict things. Our team has high goals like every team this time of year. We are all undefeated and excited. We have to have a great summer and have our kids finish strong in the classroom and we have to continue to get better. We have the capabilities of (going to a bowl), but we have to prove it on the field on a day by day basis. The summer and two-a-day camp will have a lot to do with it as well as how we mature. We certainly feel like we are better than we were a year ago.

Q: New A.D. Norwood Teague comes from VCU, where there was no football program. Does that concern you?
A: No. I have good friends in the Big Ten. Jim Phillips is a guy who hired me at Northern Illinois and is at Northwestern and he knows Norwood (they were colleagues) very well and sings his praises of what a good fund raiser and marketer he is, and what a great choice it was for Minnesota. I feel like it?s a good fit for what we need right now. And he has been involved at North Carolina and Virginia where there are some big-time (football) programs. I think he?s excited to be back at a school that has football. I look for us to have a great relationship and help build our program.

Q: What?s on your facility wish list?
A: We have a beautiful stadium. Our ultimate goal is to get us moved over to the stadium and have a practice facility and have us all in one area. We have a great set up with a great stadium and we want to continue to improve it that way and build around it over in one place. That?s what we are working for as we speak.

Q: You suffered two seizures last season. How is your health?
A: I?m doing fantastic, I?m doing well, just working hard and trying to get our program to get better every day.

Q: How do you feel about an impending playoff in college football? You have been involved with playoffs in some of your other jobs.
A: I have been involved with the bowl system and a playoff. To be honest with you, I think the bowl system is great. I don?t think we ever want to go away from it. It?s rewarding and it?s educational for the kids. When I was at I-AA and Division II, if you didn?t win it all, it wasn?t a whole lot of fun. I think a mixture of the two is a great thing. I don?t know exactly how it all will fall out. Do I think having the bowl system and a playoff at the end to determine a national championship is a good thing? I certainly support it. But I think the people making that decision, we have to study it so we don?t have too many games. But I trust the people working on it to make the right decisions and it will be good for college football.