Monday's Football Headlines Worth a Look 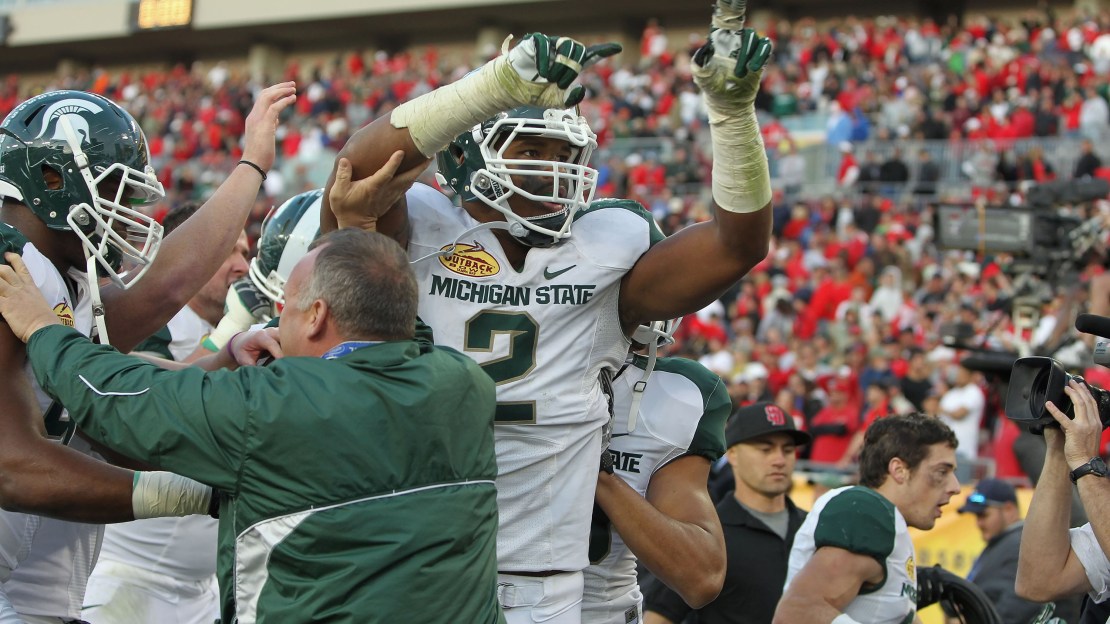 The Spartans had an upbeat weekend scrimmage while the debate over a certain Michigan jersey stays alive. Two writers discuss Ohio State's football outlook while another writer examines the Wisconsin kicking situation.  Here what I think about the football headlines buzzing around Big Ten nation on this Monday.

Spartans upbeat: Michigan State capped its spring session on Saturday with a game. The conclusion of most: The defense was dominant. And that should continue in the fall. In fact, some think the Spartan defense may be BCS bowl worthy. Really.

The defense scored the only points for the Green team, as stud end William Gholston notched a safety in a 14-2 victory by the White. Denicos Allen paces a good linebacking corps, while Johnny Adams is one half of a stellar cornerback tandem.

?I think we can be really good," linebacker Denicos Allen told Matt Charboneau of the Detroit News. "I think with the talent we have now we can definitely be Big Ten champs and, depending on how the schedule goes, I think we should win, if not all, but most of the games on our schedule. Hopefully, BCS national championship, Rose Bowl ? we've got standards like that for this team."

The Spartans yearn for a trip to Pasadena, which hasn?t come for MSU since after the 1987 season. In fact, the only other Big Ten schools who haven?t appeared in a BCS bowl (began in 1998) are Minnesota, Northwestern and Indiana.
MSU has 22 wins over the past two seasons-more than any other Big Ten team. Still, that trip to an elite bowl remains elusive. But the drought may end this year.

Who's No. 1? The debate over the No. 1 jersey at Michigan continues to be a hot issue, writes Angelique Chengelis of the Detroit News.

It?s also a tiresome issue. It?s a number. Honestly, is it that important? And, to me, any player who wants to wear the No. 1 jersey may not exactly be a team player. To me, guys who wear No. 1 are, well, hot dogs and attention-mongers.

Slow sales: It seems interest in Penn State football is on the wane, if you believe season ticket sales are a barometer.

News from State College, Pa., says season tickets sales are down. But a school official thinks when all is said and done, the season ticket base will remain basically the same for the debut of Bill O?Brien.

Reasons for the dip in sales up to this point? Penn State associate athletic director Greg Myford thinks the Jerry Sandusky child sex abuse scandal and the death of Joe Paterno are affecting ticket sales.

On tap: They are one step closer to tapping kegs at Minnesota?s TCF Bank Stadium. The governor has signed off. Now, the only remaining hurdle is for the Board of Regents to give its OK. If it all clears, Minnesota would be the only Big Ten school to allow alcohol sales in the stadium general seating. It?s believed beers sales would raise $1.5-2 million per year for the school.

Once again, money wins over sending the right message. Too bad.

Buckeye back-and-forth: Tim May and Bill Rabinowitz of the Columbus Dispatch have a back-and-forth exchange on what they know about Ohio State with spring drills in their rear-view mirror.

The offense will be fast-paced and up-tempo, working from a spread scheme. The defense? Don?t expect any crazy shifts in the 4-3 alignment of coordinator Luke Fickell.

Me? I?m still curious about the offense. We didn?t see it at full throttle in the spring, as star running back Jordan ?Percy Harvin? Hall missed the spring game with a foot sprain. He will have to be the star of the offense in the fall.

And the receiving corps remains a work in progress, though true freshman Michael Thomas flashed great things. But wideouts like Corey Brown, Evan Spencer and Devin Smith? They still have to show me if this Buckeye team is gonna be as good as I think it can be-and I think it can be VERY good. Maybe the best in the Big Ten.

Just for kicks: There is lots of hang-wringing at Wisconsin about the quarterback and receiver situations. Fair enough. But what about kicker?

Philip Welch is gone-and so if punter Brad Nortman, who was an NFL pick. But the Badgers may be OK at kicker with Kyle French, who looked good in the spring game on Saturday.

And fans got a sneak peek at him last season, when he kicked in the first four games while Welch was hurt, hitting three-of-five field-goal attempts.

Bottom line: Wisconsin has an impressive legacy of kickers. And I trust French will be the next great one for a team that may need his leg to win a game or two in its quest to win another Leaders title.

Sophomore running back Aaron Green has decided to transfer from Nebraska according to is father Tony Green. – http://t.co/6KOzUQyY #huskers

My take: Losing Green is a blow to the Husker program. Bo Pelini felt he came on during spring drills and figured to see action carrying the ball behind Rex Burkhead. Now, Nebraska will have one less weapon. Not good.

My take: Bill O?Brien thinks like a guy in the NFL, which of course makes sense because ? I don?t know about you, but the change at Penn State actually has me excited about Nittany Lion football. And it has been a while since I could say that.

My take: But, really, so much more went on during Saturday?s spring game. As stated above, the defense dominated. But the offense? It went in fits and starts without projected starter Andrew Maxwell under center, as Connor Cook took most of the snaps. Love the o-line, love the running backs. But the wideouts? We will see.