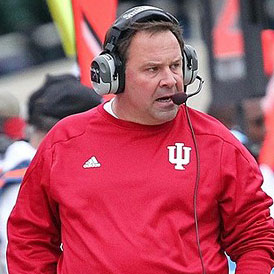 No one told Kevin Wilson that the Indiana job was going to be easy. When he arrived from a highly successful stint as offensive coordinator prior to the 2011 season, Wilson found a Hoosier program that had been to one bowl (2007) since 1993. In that time, Cam Cameron, Gerry DiNardo, Terry Hoeppner and Bill Lynch came and went after Bill Mallory left after the 1996 season.

Wilson debuted with a 1-11 mark last season, the lone victory coming over FCS South Carolina State. I caught up with Wilson to get his thoughts on where he thinks the program stands at this stage of his tenure as part of my series of conversations with Big Ten football coaches.

The biggest priority is developing a defense that struggled in 2011. The Hoosiers ranked last in the Big Ten in total defense (458.7 ypg); last vs. the run (243.7 ypg); eighth in pass defense (215.0 ypg). And when it came to forcing turnovers, Indiana was 11th with only 16. Some of that had to do with an inability to generate pressure, as the Hoosiers were 11th in the conference with 1.5 sacks per game.

The offense also has work to do, as the line needs to get a better push in the ground game. And, more than anything, Wilson wants a better passing attack.

But Wilson, 50, is optimistic entering his second season in Bloomington. He finished spring drills almost two weeks ago, but his mind already is thinking about the fall.

Q: What were some things that pleased you coming out of spring practice?
A: It?s Year Two, so you don?t have to spend as much time on schematics and getting more into the how-tos and fundamentals a lot more. Also team building and chemistry. Before, we were just trying to get people lined up and understanding snap counts and calls. And we have a better understanding of what we have from a strengths and weaknesses standpoint.

Q: What kind of impact have the junior college players had on defense?
A: We took a number of them. They all are in the mix in some regard. They all will be special teams players. We have two linebackers, two safeties and a d-end. The linebackers did well. Of course, linebackers show a lot more just because of the nature of the position. David Cooper kinda gives us something we need at middle backer. Jacari Alexander at outside linebacker is a guy who could be good in some blitz/run situations. We moved Tregg Waters from safety to corner. Justin Rayside is in the mix at d-end, where we will play multiple guys. We will wait to see if they are starters. I hate to say too much right now. They all are in the two-deep and they all are helping. We needed them. Glad they are here. I thought they did OK for us. But they are still learning and working. I don?t want to sit here and say they are the answers. They have had good springs and fit in great so far.

Q: You also brought in quarterback Cameron Coffman from a JC. Is the quarterback job open between him and Tre Roberson?
A: When you are 1-11, I don?t think anything is set. You might be a decent player. But when you are on a team that?s not doing well, they whole team needs to do better. I?m not trying to motivate, threaten or play games through the media ?

Q: What are your thoughts on social media?
A: Playing football is a privilege. At the same time, you have freedom of speech as one of the foundations of our country. But you need to teach players that everything now is so public. I will bring a guy in and Google his name to see what comes up. When I pull up your Facebook, is this a picture you want? Is this a comment you want? I may tell a guy I don?t think it represents us and I don?t think it represents you. I will show our guys things I don?t think are appropriate. I?ll say: Little kids can pull this up and see you, and I don?t think you want that out there. They are using it, I?m just trying to educate them on how to use it and be wise, how things you do and say will still be out there five or 10 years from now and future employers may see it.

Q: How will the offense be different with Seth Littrell arriving from Arizona as coordinator?
A: We trying to commit to improvement in the pass game. We emphasizing teaching and repping our plays. Tre (Roberson) got his career off to a decent start last year. He can make some good plays with his feet. The guy can run, but can he throw? For us to win, we have to make some defensive strides. But we also have to score some points. The biggest way we can make jumps scoring points is with the passing game. Seth runs a system I am used to. It?s a lot of things, not just new plays. There is an emphasis on teaching and coaching and how to rep it and call it. We want to see if we can make some pass strides and point strides to get some Ws.

We have to make some defensive strides. But we have to have an offense that?s gonna put some points on the board. We were as bad on offense as we were on defense last year. We have to tackle better and kick it better. We aren?t changing the offense, just trying to make some big improvements in passing the ball. We need to teach Tre how to become a better thrower.

Q: Who will be some of your leaders?
A: We are working hard on that. We have three seniors on the defensive tackles in (Nicholas) Sliger, (Adam) Replogle and (Larry) Black. Will Matte on the offensive line is a senior. Those are our four main seniors. We only will have six or seven seniors. We are very young. There has been some attrition. They guys left are rock-solid guys. Kofi Hughes will be a third-year player, Tre Roberson, Stephen Houston is a second-year player. Chase Hoobler and Mark Murphy are two freshmen who played great last year. We have some young guys who are having to step up. And it?s kinda hard when you are learning to step up and lead. We probably will have to have more leadership by committee instead of by a guy. I don?t know if we have one guy who is strong enough to lead the team. I have a group of guys I?m putting the heat on to be our core leaders.

Q: Did you study any other teams in the offseason?
A: We are tied in with the Oklahoma guys, of course. We had some of the West Virginia guys pass through. Seth knows (WVU coach Dana) Holgorsen. Chuck Long came by for a day or two. He?s a great coach and friend (who is out of work right now). I spent a day at a place trying to see how the Wishbone is run in preparation to play Navy. I didn?t go to study how to stop it. I went to study how we could practice it.

Q: How soon before you get to a bowl?
A: I don?t know. I didn?t come in and say we were gonna do it in Year One or Year Two. If you say you wanna win X number of games, people will say ?he is pipe dreaming.? But if you sit here and say you aren?t gonna win them all, I think your team thinks you don?t believe in them. We have some young kids who have worked hard. We are gonna back them up with another solid class with a better attitude and work ethic. The schedule sets up reasonable. We have to find a way to win some Big Ten battles on the road. We go to Northwestern, Illinois, Purdue and Penn State. We have Ohio State, Michigan State, Wisconsin and Iowa at home. We have Ball State, UMass, Indiana State and Navy in non-conference. There are some games that if you play well, you can be in the mix and reach some goals. I didn?t think we?d be as far off as were last year. But at the same time, the record is what it is. We are working in a positive way. No butting heads or pulling teeth.