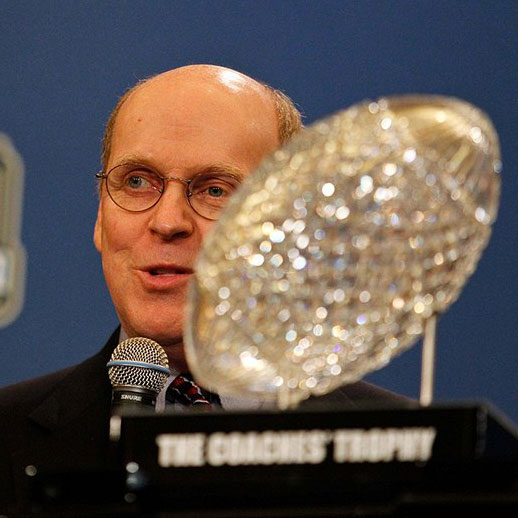 Be prepared to say good-bye to the old Bowl Championship Series system. Or, perhaps you feel more like uttering ?good riddance.? Either way, get ready to say ?hello? to a college football playoff.

That?s correct-a playoff. No, you haven?t died and gone to heaven. It?s true. College football could be crowning its national champion with a playoff as soon as the 2014 season, although there is plenty of work to do before that. The 11 conference commissioners and Notre Dame have emerged from three days of meetings in Hollywood, Fla., with a plan that will forever change the sport.

It won?t be a full-blown, eight- or 16-team playoff that some people favor, but it will be a "final four" that features two national semi-final games and a championship game. And the bowls figure to still be involved, but many details still need to be hammered out in coming months. All sides at those Florida meetings reminded us of that. The three main issues: 1. Where would national semifinal games be played? 2. How would the four teams be selected? 3. How would money be divided among leagues?

BCS executive director Bill Hancock estimates there are anywhere from two to seven configurations being considered by the leagues. The commissioners will reconvene in June to hash out a final system. University presidents will then have to give the OK, which could happen in July. If all goes well, the playoff would be put in place for the 2014 season-as the current BCS system has two years remaining.

As for the current BCS, will it survive past the next two seasons? "I hope not," Southeastern Conference Commissioner Mike Slive said Thursday in this story from the Associated Press.

Whichever team finishes fifth probably will complain about being unjustly kept out. Regardless, the involvement of more teams in the chase for the championship is a start that figures to be widely hailed by the public, including President Obama who has publicly stated his preference for a playoff.

Could this humble beginning of a playoff someday lead to the system growing to, say, eight teams? Who knows? Many felt we?d never see this day. So, never say never.

The bottom line is this: The lid has been taken off of a playoff. Now that it is here, there?s no turning back. And I have to think there?s a chance-A CHANCE-it could expand over time. The NFL playoffs grew by adding wild card teams. Major League Baseball expanded its postseason with more wild card teams.

But let?s not get ahead of ourselves. Let?s savor this historic moment in college football annals.

A playoff is coming.

Earlier this week, I wrote a Q&A that might help understand all of the moving pieces in this story. Give it a read. Also, here's a quick look at some tweets from national writers covering this story.

As we thought a couple weeks back, a 4-team playoff is what is going to happen. Now they just have to figure out how to do it.

Nearly all the commissioners stopped and talked on way out of meetings. Universal theme: A lot still to be worked out, confident it will be.

Power to the people … RT @slmandel: So why now? Hancock: "they are listening to the fans. They get that they want something different."

And in case you're curious, here are last season's final BCS standings. Plus, since it is late April, we offer up this link to www.bcsfootball.org as a great way to reacquaint yourself with the entire concept of the BCS.