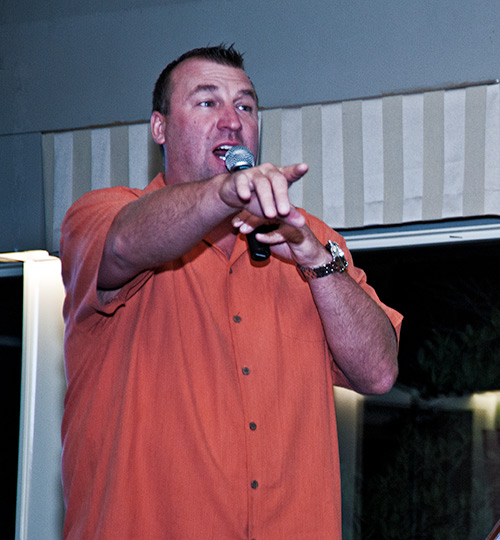 We'd like to thank Jeff Potrykus, of the Milwaukee Journal Sentinel, for alerting us to this great Bret Bielema story. Evidently, Bielema made an impromptu appearance at the annual Wine & Roses fundraiser for the Alzheimer's & Dementia Alliance of Wisconsin on Saturday at Nakoma Country Club in Madison, Wis.

The Wisconsin football coach didn't only attend the event – he stepped up to the mic, played auctioneer and raised $3,000 for two tickets to his private suite, as well as a pair of sideline passes, at Camp Randall Stadium.

How did Bielema end up at the auction, you ask? Consult Stephen Busalacchi's blog for the entire story. It's a great read.

"It turns out Bielema was having dinner with his new wife at Nakoma and realized one of his friends was attending the Alzheimer's Alliance function. Then, he found out the widow of late UW football coach Dave McClain, Judy McClain Mauerman, was our keynote speaker. Now remarried, she suffers from the disease, but still communicates clearly and effectively. Bielema volunteered two tickets from his private suite, as well as sideline passes, to help raise money to support Wisconsin Alzheimer's patients like Judy."

By coincidence, we found this video from last year of Chicago Tribune reporter and BTN contributor Teddy Greenstein playing golf and chatting with Bielema at Nakoma Golf Club in Madison, WI.