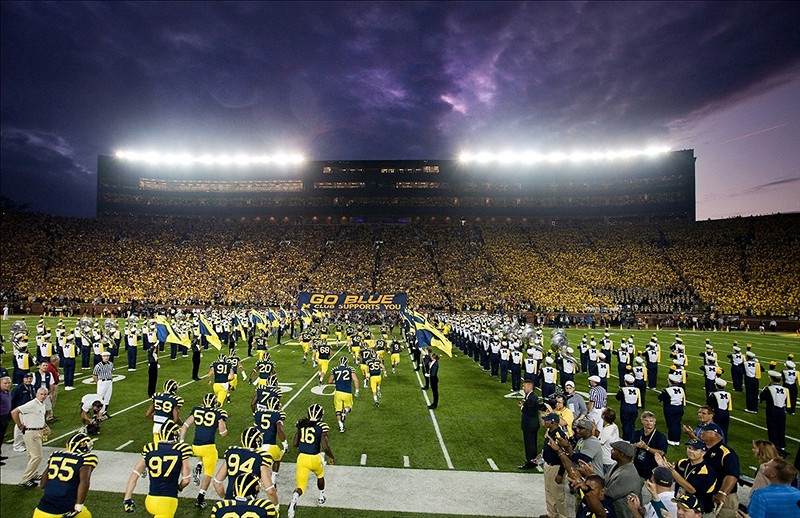 The news came down today: The Big Ten features 14 home football prime time games that will appear on ABC, ESPN, ESPN2 or BTN during the 2012 season.Wisconsin at Nebraska, Penn State at Iowa, and Michigan at Nebraska highlight the conference night schedule. Earlier this spring BTN.com's Tom Dienhart ranked his top 15 Big Ten games for next fall as well as his Top 15 non-conference games. Now read in this post Dienhart's take on each of the prime time games once Big Ten Conference play begins Sept. 29.

Dienhart's Take: This will be the Big Ten lid lifter for both teams and a clash of marquee running backs, with Wisconsin?s Montee Ball facing Nebraska?s Rex Burkhead. And, no doubt, the Cornhuskers will have revenge on their mind after losing, 48-17, at Wisconsin last season. This will be a good litmus test to see if the Cornhuskers are ready to win the Legends Division facing a Badger squad that it very well could meet in the Big Ten title game. This will be Wisconsin?s first junket to Lincoln since 1973.

Dienhart's Take: The storyline should focus on which quarterback has developed the most: Nebraska?s Taylor Martinez or Ohio State?s Braxton Miller? But most folks probably will want to talk about Cornhusker coach Bo Pelini returning to his alma mater, where the Youngstown, Ohio, native was a safety for the Buckeyes from 1987-90. Bo probably won?t like that, preferring to focus on what should be a strong Ohio State squad looking for payback after squandering a 27-6 lead in the third quarter en route to a 34-27 loss in 2011. Each team will be coming off a tough game, as Nebraska plays host to Wisconsin and Ohio State will be coming off a visit to Michigan State.

Dienhart's Take: The Hoosiers haven?t beaten the Buckeyes since winning in consecutive seasons in 1987-88 under Bill Mallory. Remember that? Probably not. Nonetheless: Could Indiana have some magic this season? It will be a tall order vs. a Buckeye squad that figures to have one of the better defenses in the Big Ten and an offense filled with potential running Urban Meyer?s new spread scheme. By the way: Indiana coach Kevin Wilson was the offensive coordinator of the Oklahoma team that lost to Meyer?s Florida Gators in the BCS title game after the 2008 season.

Dienhart's Take: When it comes to playing Penn State, Kirk Ferentz is a master, owning an 8-3 record in what has been a series filled with some thrillers of late. Who can forget the 24-23 Iowa win in 2008? How about the Hawkeyes? 6-4 nail biter in 2004? The 2002 game was an overtime affair won 42-35 by Iowa. The teams went two OTs in 2000, with Iowa prevailing 26-23. Let?s hope this meeting follows that exciting form.  The Hawkeyes will need to beat a Nittany Lion squad that?s breaking in new schemes on both sides of the ball. Each defense could be solid, so this may come down to the offenses. And the Hawkeyes figure to have a big edge at quarterback with James Vandenberg, who is looking to avenge last year?s 13-3 loss in State College, Pa.

Dienhart's Take: Each storied program is breaking in a new coach, with Urban Meyer at Ohio State and Bill O?Brien at Penn State in a big Leaders Division clash. Since they are ineligible for the league title, the Buckeyes are relegated to the role of spoiler. The Nittany Lions may still be in the thick of the division race, so the home crowd will help vs. an Ohio State team whose strong defense will be a big test for a Nittany Lion offense in transition. Will there be a White Out in Beaver Stadium?

Dienhart's Take: This could be-COULD BE-a de facto Legends Division title game. The Wolverines whipped the Cornhuskers last season in Ann Arbor, 45-17. Both teams are almost carbon copies of each other: offenses built around run-oriented quarterbacks and defenses looking for playmakers. This may come down to which school can pass the best. Know this: This game falls in the midst of a rugged five-game stretch for the Cornhuskers that begins with Wisconsin and ends with Michigan State. The Wolverines will be coming off an emotional game vs. Michigan State.

Dienhart's Take: This is the Big Ten opener for both teams. And for Purdue, it?s the start of a rugged three-game stretch that sees them welcome Wisconsin and then play at Ohio State after playing Michigan. The Wolverines will arrive in West Lafayette coming off a bye week. This may be Danny Hope?s best Boilermaker squad. Can Purdue?s overhauled defensive staff contain Denard Robinson? A win here would go a long way toward stamping Purdue as a legit contender in the Leaders in this cross-division matchup. Purdue beat Michigan back-to-back in 2008-2009, but Michigan has taken the last two encounters.