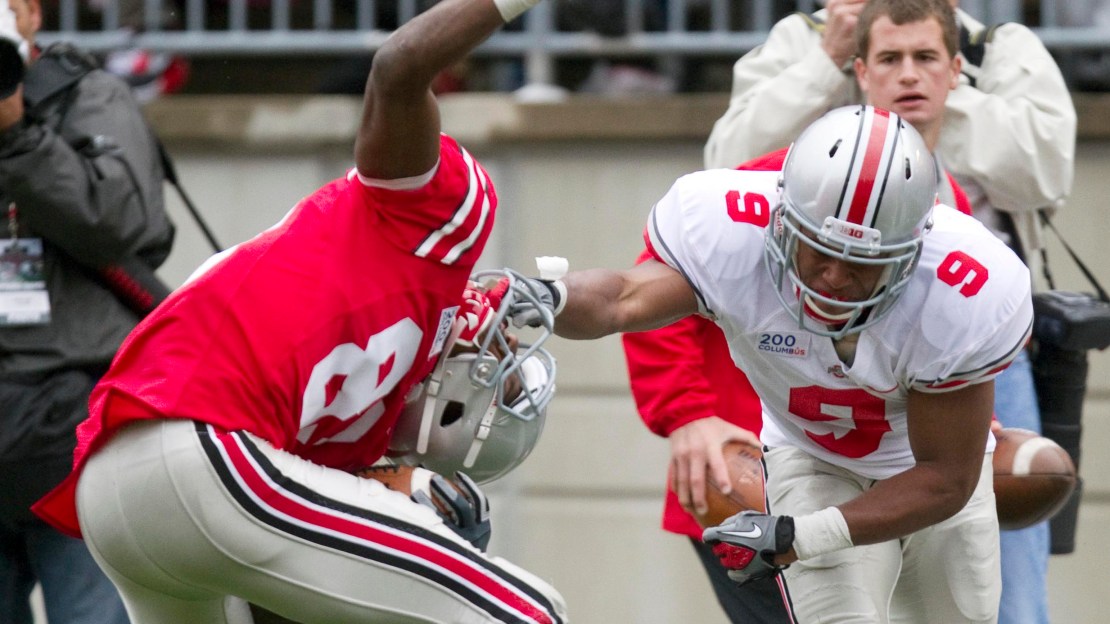 COLUMBUS, Ohio — Urban Meyer has talked about the need to find players who can make things happen. He calls them ?wow? players. Well, the first-year Ohio State coach found one in the spring game today in receiver Michael Thomas.

The Scarlet beat the Gray, 20-14, but that was far from the top story. Rather, the emergence of Thomas was the headliner. The true freshman who graduated high school early to take part in spring drills led all players with 12 catches for 131 yards with a long of 23. Not bad for a kid who should be preparing for his high school prom. Instead, Thomas is preparing for stardom this fall for a Buckeye roster that has a yawning need for receivers.

Yes, it?s only a spring game (read some of my tweets over here), but it?s a heck of beginning for Thomas, who looks a lot like former Ohio State great Michael Jenkins with his smooth moves and stride. Thomas also has sticky mitts. But Meyer wasn?t shocked by all of this from a guy who is the nephew of former NFL star wideout Keshawn Johnson.

?He?s our most dedicated receiver,? said Meyer. ?I?m not surprised he had that type of game today.?

Thomas spends hours on his craft away from practice, specifically working at catching passes from a JUGS machine. That extra work and attention to detail paid off today, a day that Meyer wanted to devote to working on the passing game. And, the Buckeyes did just that.

No. 1 quarterback Braxton Miller hit 24-of-31 passes for 258 yards with no touchdowns and an interception. Backup Kenny Guiton hit 16-of-24 for 185 yards with a touchdown and pick. That?s 55 pass attempts. Conversely, Ohio State ran 36 times.

A few top players didn?t play (running back Jordan Hall and linebacker Curtis Grant), while others played sparingly (defensive linemen John Simon and Johnathan Hankins). Still, plenty of others got work, as Ohio State heads into the offseason with work to do.

* The offensive line. The unit is replacing three starters. For now, the left side looks solid with Jack Mewhort (the unit?s best player) at tackle and Andrew Norwell at guard. The right side needs to be watched. Converted tight end Reid Fragel is at tackle and Marcus Hall is at guard. Corey Linsley is taking over at center, where he has impressed. This is a work-in-progress.

* Linebacker depth. It was too bad Grant didn?t play today. He could have used the work as he played sparingly as a freshman in 2011 after arriving as a decorated recruit. Ryan Shazier looks like the next great Buckeye linebacker, while Storm Klein is steady and Etienne Sabino is building on a strong finish to 2011. But depth and leadership remain issues.

* Receiver. The unit was crippled last year with DeVier Posey out 10 games with suspension. Questions remain coming out of the spring. Meyer has said he wants 10 or so wideouts he can count on. It doesn?t look like Ohio State has that many at this point. While Thomas appears to have emerged, players like Cory Brown, Devin Smith, Evan Spencer and Chris Fields still have something to prove.

*Leaders. Who are they? Meyer has said the only sure one he has is Simon. To that end, Meyer is in the process of developing an ?elite eight,? which will be the ?most committed guys to the program,? said Meyer. The eight don?t have to be the best players-though Simon is one of them. Rather, they must represent the program and school by doing things the right way.

It?s all part of building up an Ohio State program that?s coming off its first losing season since 1988, which was John Cooper?s first season.

Last season got off to a bad start, when in May Jim Tressel stepped down amid an NCAA investigation into extra benefits-among other things. Ohio State subsequently was placed on probation that included a bowl ban and ineligibility for the Big Ten championship. Defensive coordinator Luke Fickell took over as interim head coach and led the Buckeyes to a 6-7 mark. Then, the Ohio State brass hired Meyer, who led Florida to a pair of national titles but sat our 2011 to improve his health.

The arrival of Meyer has energized and invigorated the Ohio State fan base, whose enthusiasm isn?t tempered by the probation. They know USC forged a 10-2 record in 2011 (and was one of-if not the-best teams in the Pac-12) despite not being eligible for a bowl or league title. They know under similar circumstances, Auburn went 11-0 in 1993. If those teams could excel under trying times, then the Buckeyes can-so the thinking goes in Columbus.

No doubt, this is a talent Ohio State team that could finish with the best record in the Big Ten if it answers its key questions. And it all begins with a visit from Miami (Ohio) for the season opener on September 1.

This is gonna be interesting-and fun.